Early 4 wheel drive trucks used a solid axle up front because it was simple, and strong. However, the solid axle has downsides. One of which was the ride quality. Anything that disturbs one side of the axle affects the other side too. With an independent suspension, both sides work independently from each other. IFS was designed in part to provide a smoother ride, but like everything else on a vehicle; it has its strengths, and weaknesses; we’ll explore both.

In order for the axles to articulate when the suspension moves up and down, the IFS uses constant velocity joints (CV’s). The CV’s get their name from their function. As they move, they maintain a constant velocity unlike your standard cardan or universal joint. CV’s do not need to be timed like a universal joint, and opposing CV’s can work at different angles without causing a vibration. 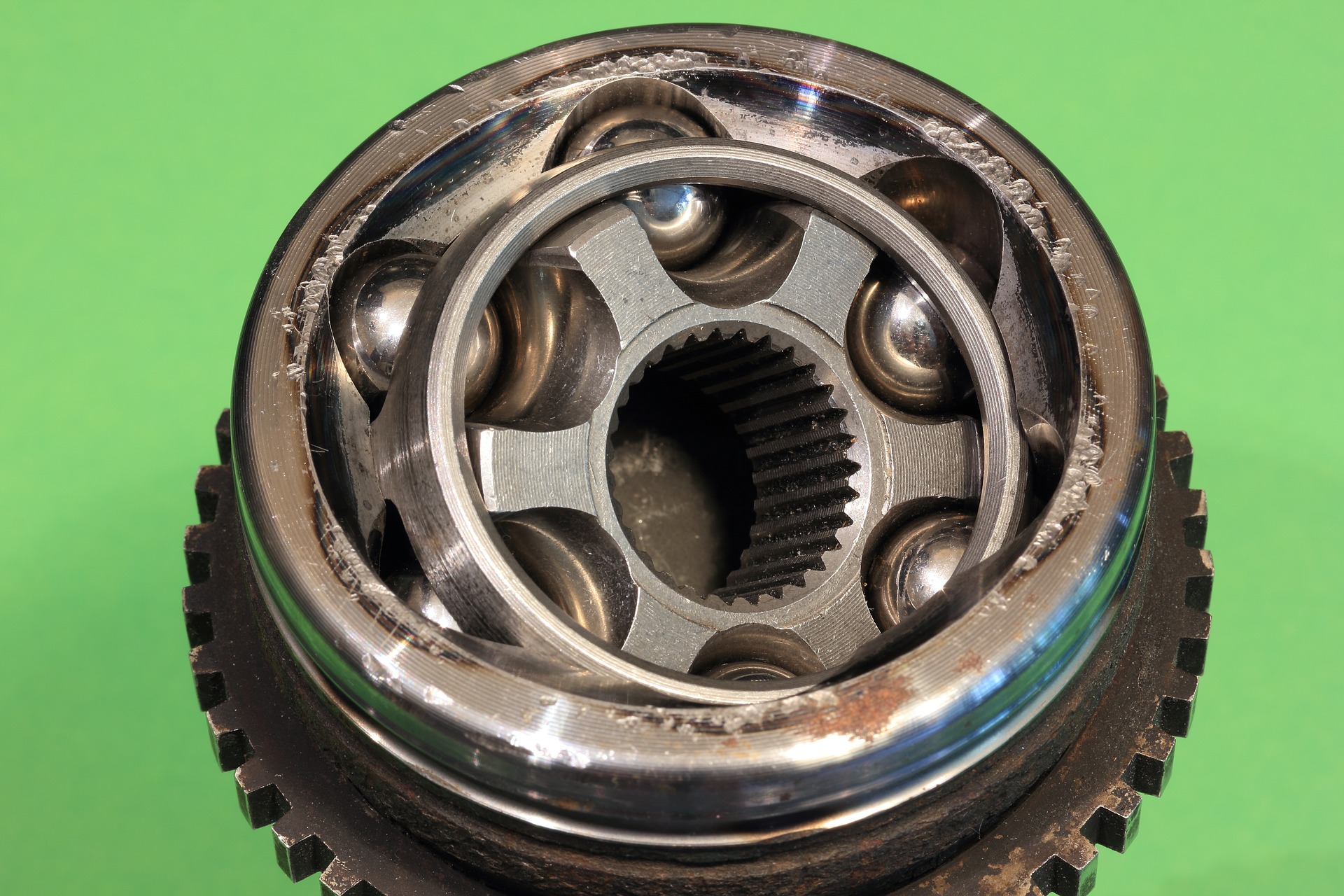 CV’s are constructed from a splined “star” that slides over the splines on the axle shaft. The star has deep grooves on the outside diameter that provide a bearing race for several large ball bearings (typically 6). There are other designs that use square parts with needle bearings, but the most common CV’s use round balls. The round balls are contained in a ring that has holes through it where the ball bearings sit. The ring is called a cage. The cage and bearings then fit into the outer housing that has the same deep grooves of the star in its inside diameter. The star drives the bearings that in turn drive the outer bearing housing. The cage simply holds the ball bearings in place.

The result is an assembly that drives the axle shaft while allowing it to articulate in any direction. There is a limiting factor to the articulation; a maximum angle that the CV can move. If the axle shaft exceeds that limit it can bind, or come apart. All that motion of the balls creates a lot of friction (heat), so proper lubrication is a must. That’s why it’s also critical to keep dirt out of the CV; that is the job of the CV boot. The boot needs to flex with the CV while keeping the grease inside, and water, and debris out. Boots are made from rubber, silicone, or plastic. Heavy duty leather boots are also available, but those are mostly used for racing. One of the shortcomings of CV’s is when the boot gets damaged, the grease escapes, and it doesn’t take much foreign matter to destroy the CV joint. 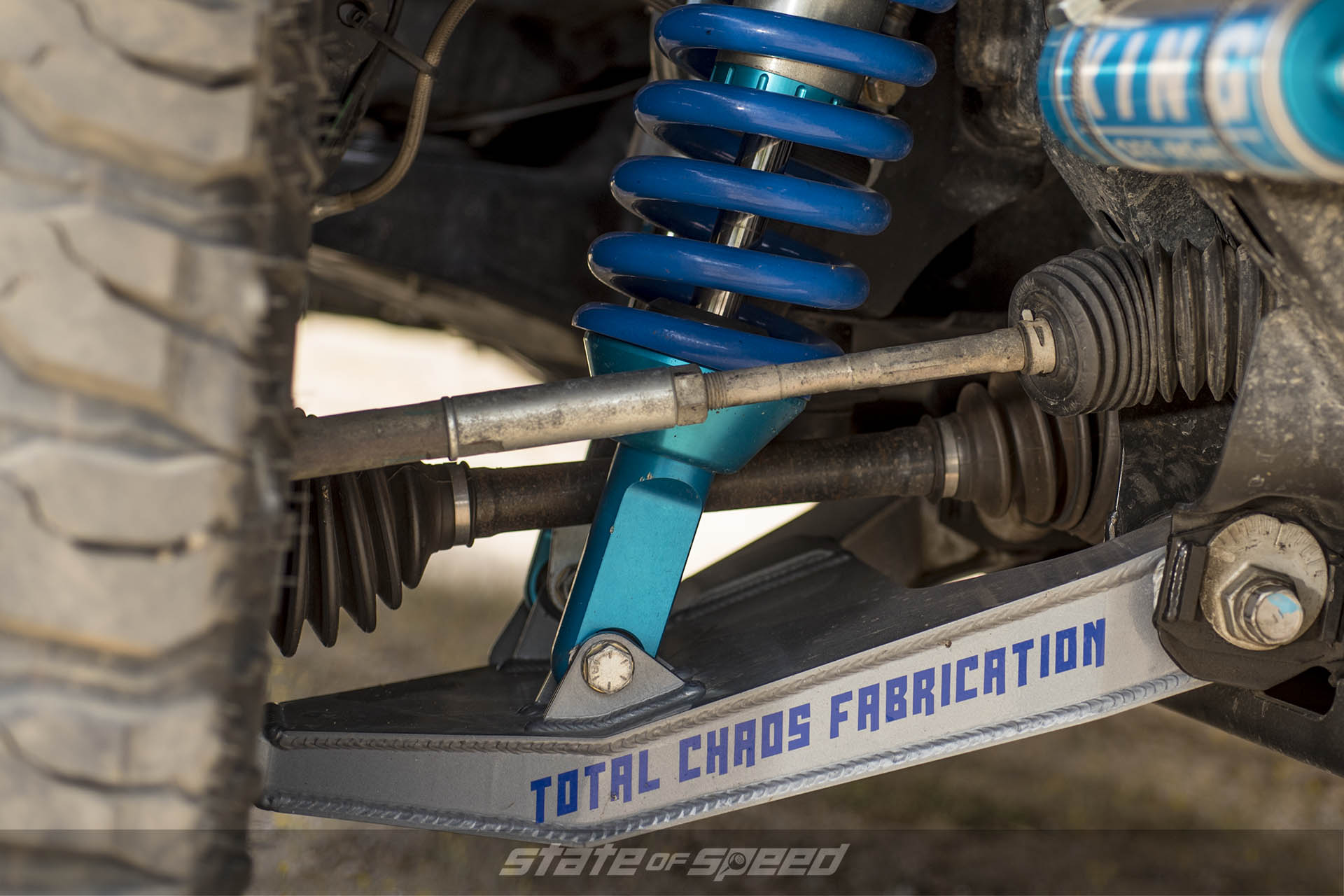 An IFS has more moving parts, and more points of failure than a solid axle. Each a-arm will have a pivot or two with a bushing on the chassis end, and a ball joint or spherical bearing at the upright that allows the suspension to move up and down and to turn at the same time. All these points create friction so they will wear over time, and can fail. There is also a packaging problem with IFS. Fitting shocks, steering, and axles into a space tight enough to still allow tire clearance at full lock can be daunting. The other issue is the CV’s maximum angle. It will limit the amount of suspension travel available. 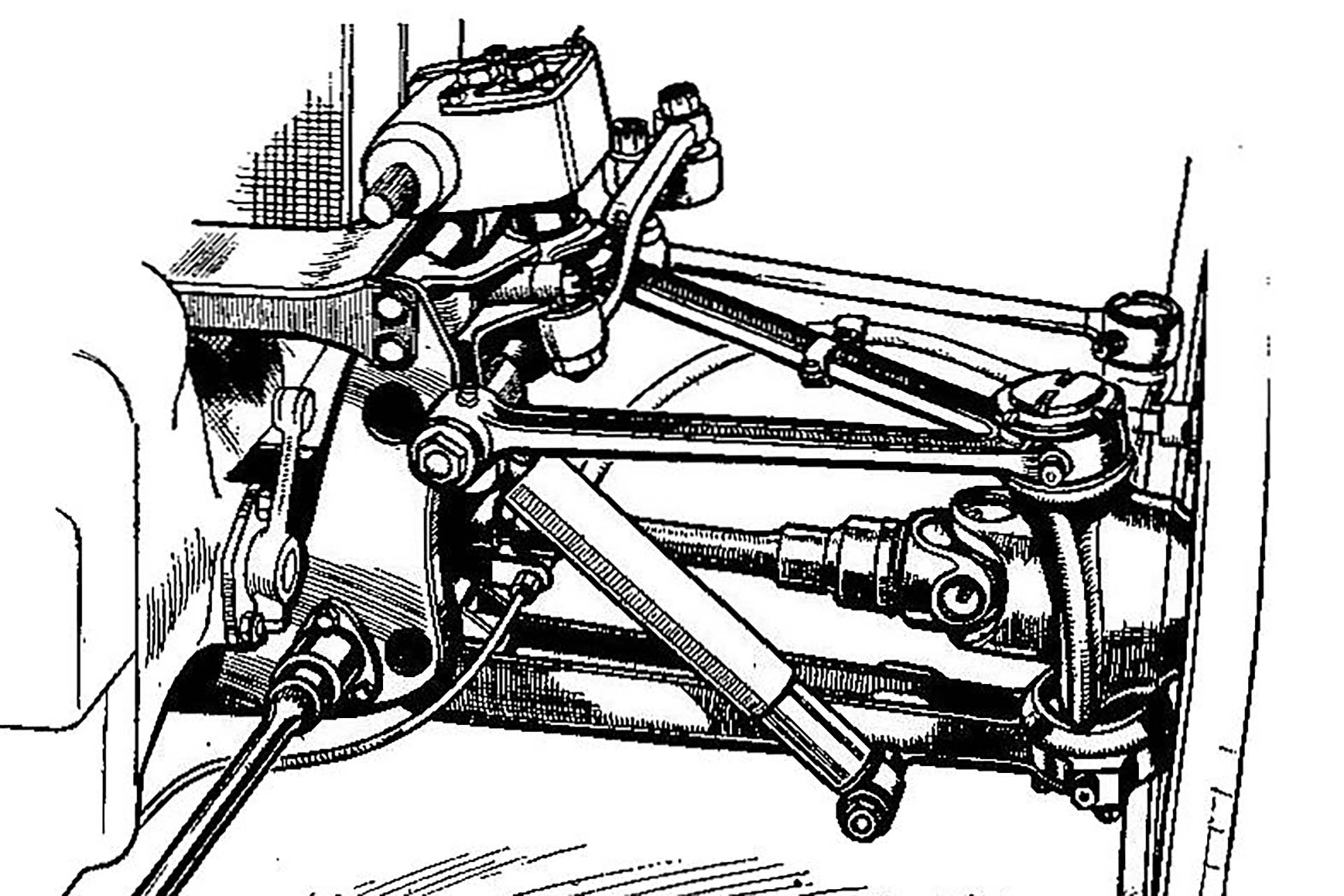 Most independent suspensions use an upper and lower a-arm, and a spindle or upright as many call it. The exception to this is Ford’s Twin Traction Beam Suspension, or TTB. The TTB is unique in that it has what is typically a solid axle with a universal joint in the long side axle which allows both sides of the housing to articulate. It’s a solid axle with a pivot in the middle. It does offer independent motion of both wheels, but it has more of the properties of a solid axle than an independent suspension using a-arms, and CV joints. 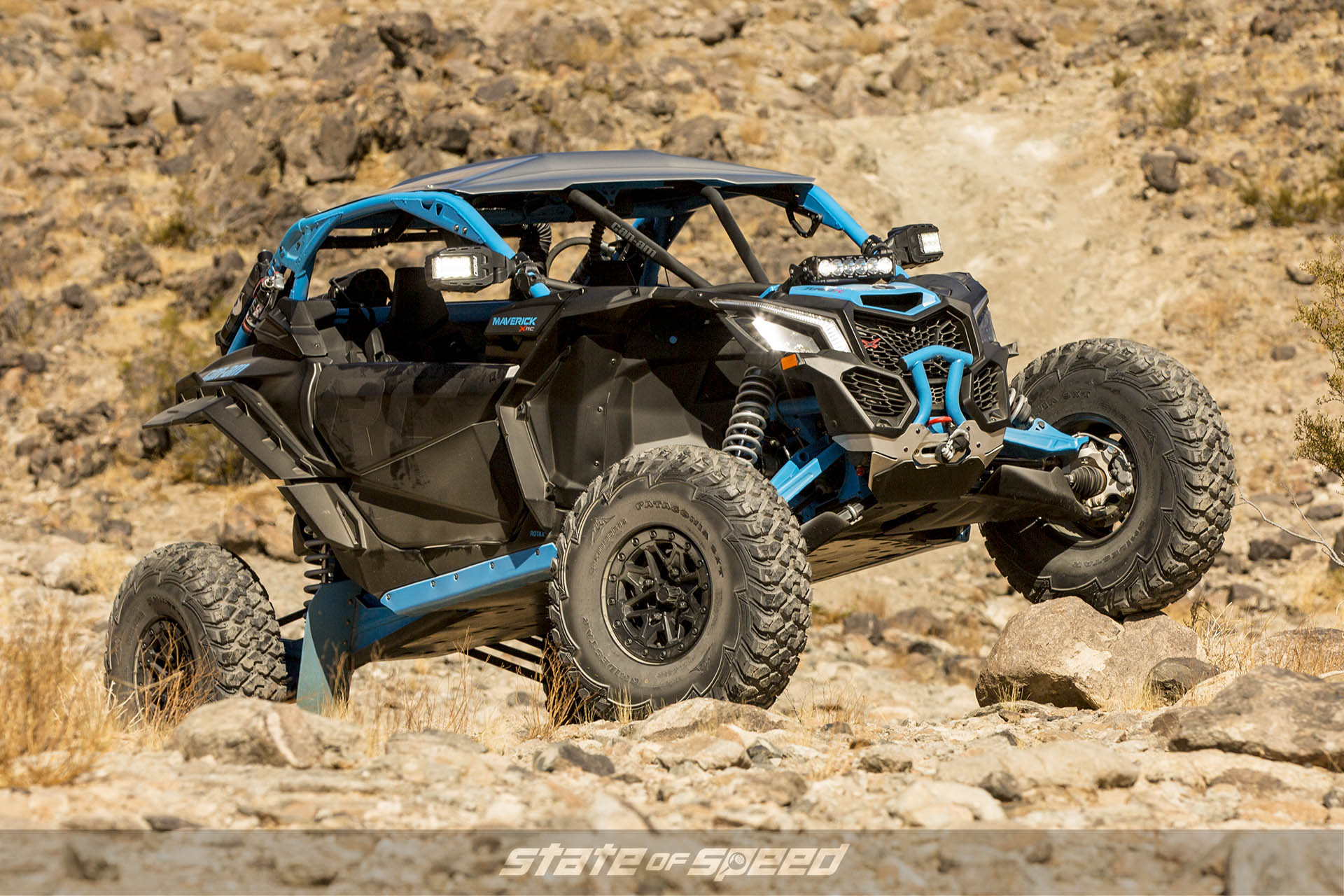 When designing an IFS, room for the differential housing in the chassis has to be taken into account. The front end already has tons of stuff occupying space like the engine, fan, and radiator. Some designs simply drop the chassis down in the center of the frame to mount the differential. This can cause ground clearance problems. Instead of an axle that can move, you have solid frame making contact to the ground or rocks. If the IFS is properly designed, it can actually increase ground clearance in front, but moving the differential up too high can lead to excessive angles on the CV joints, a definite limiting factor. That’s why many rock crawlers prefer a solid axle in front. The solid axle will lift the entire front end up and over rocks. With an independent front design, you need to keep the tires on the rocks as one side of the suspension will go up and over the rock, while the chassis and opposite side are not affected. When it comes to the rocks, the solid axle has some advantages over IFS.

Breakthroughs in CV joint designs, as well as other IFS parts and assemblies have pushed 4 wheel drive IFS to high levels of durability.

It was already mentioned that the IFS gives a smoother ride, it has other attributes as well. Because of the way the upper and lower a-arms travel in an arc, the upright maintains nearly perfect camber throughout the suspension travel. Where a straight axle will have the tires on an angle when it articulates, the IFS will keep the tread of the tire parallel to the ground. That maximizes the contact patch of the tire, giving you maximum traction for acceleration, braking, and steering control. It also saves the sidewalls of your tires from possible damage. Because both tires move independently, and with less input on the chassis, the vehicle tends to be more stable; especially at high speeds. Both tires are free to move up and down, and remember there is also less unsprung weight, so the vehicle remains level and constant. With more traction, and better steering control, there is less understeer in the corners. Understeer is when the vehicle resists steering input and the vehicle momentum overcomes traction. It causes the vehicle to push straight ahead in the turn. With an IFS you can push harder into the turns, and accelerate sooner because the front will turn better. While the straight axle might be better suited to slow speeds in the rocks, the IFS shines at high speeds in rough terrain. Impacts that will upset a straight axle suspension will be soaked up with ease by the IFS.

Breakthroughs in CV joint designs, as well as other IFS parts and assemblies have pushed 4 wheel drive IFS to high levels of durability. Pro-4 racing on the track, and Ultra4 racing offroad has refined the parts needed to apply the horsepower and torque that is available today. So much so that Unlimited Trophy Trucks, the biggest and baddest trucks racing in the desert, are now being built with 4 wheel drive. The drive assemblies are so reliable that the extra complexity is worth it. The benefits include less possibility of getting stuck in the silt, quicker acceleration out of the turns, being able to drive deeper into the corners, and less wheel spin so your tires may last a little longer. New designs with portal axles to reduce CV angles, and provide additional gearing options will push performance ever farther. There have been several 4 wheel drive Trophy Trucks in the past, but they seemed to be burdened by the complexity of 4 wheel drive. Now that the bugs have been worked out, 4 wheel drive IFS has become the wave of the future.