What Is the Every Man Challenge?

The Ultra4 Racing King of the Hammers (KOH) is the off-road experience you can’t miss out on, but there is a need to qualify for it. Fortunately, for those on a tighter budget, the Every Man Challenge is around to let stock and lightly modified rigs race on a similar course as the big one. 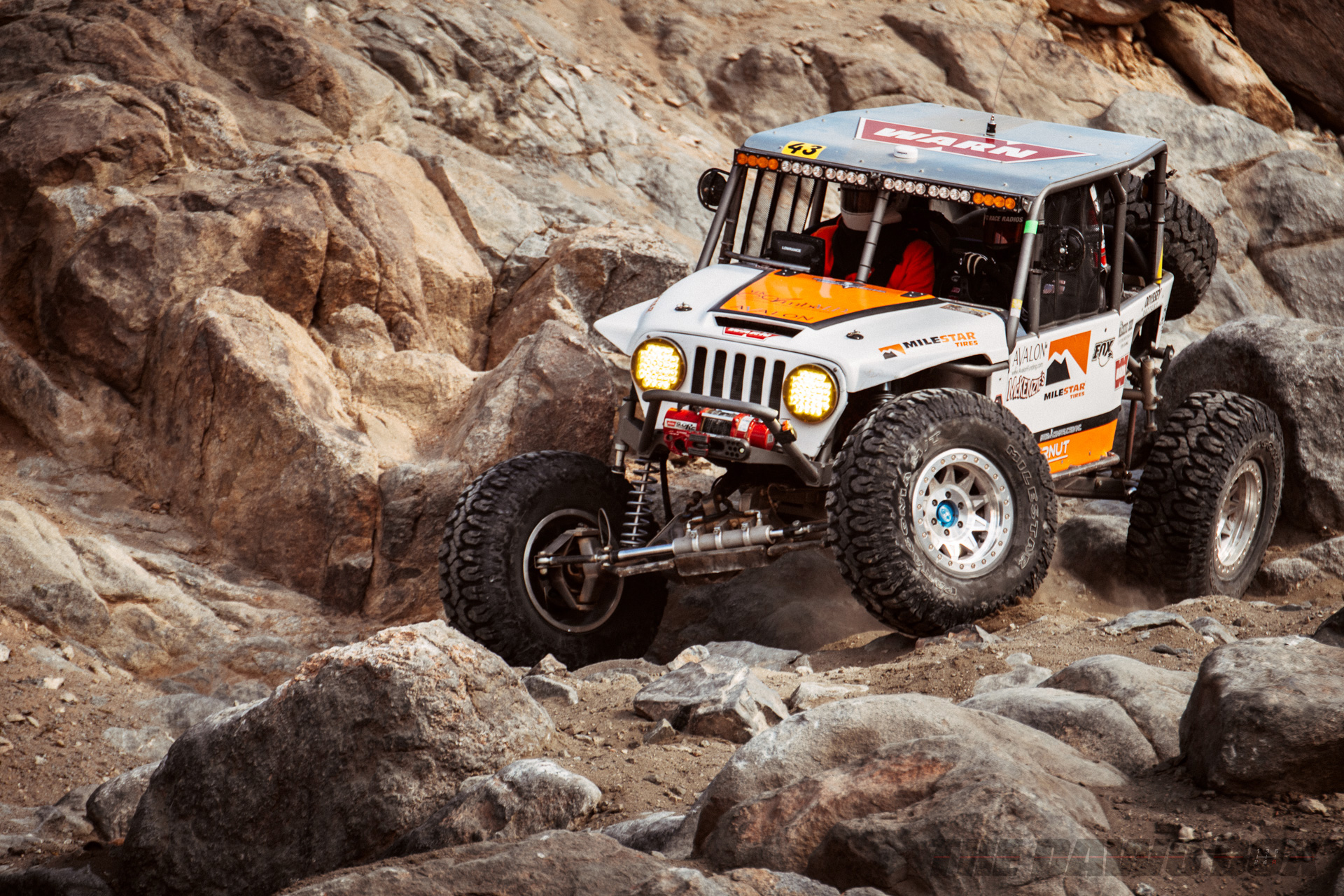 How The King of the Hammers Got Started

As cliché as it sounds, KOH started in 2007 with a group of guys lead by Dave Cole and Jeff Knoll who decided to have a race on a Friday in the middle of Means Dry Lake. From the group of 50 to 60 drivers that were sent invites, 12 drivers showed up with rock crawling rigs. They weren’t specialized as we see now, and many were just trucks built for fun and hobby driving. Some rigs just had air shocks and leaf springs, something you don’t see now except maybe in the 4600 Stock Class. Of the 12 racers that showed up, John Reynolds with Randy Slawson co-driving won the first ever KOH. 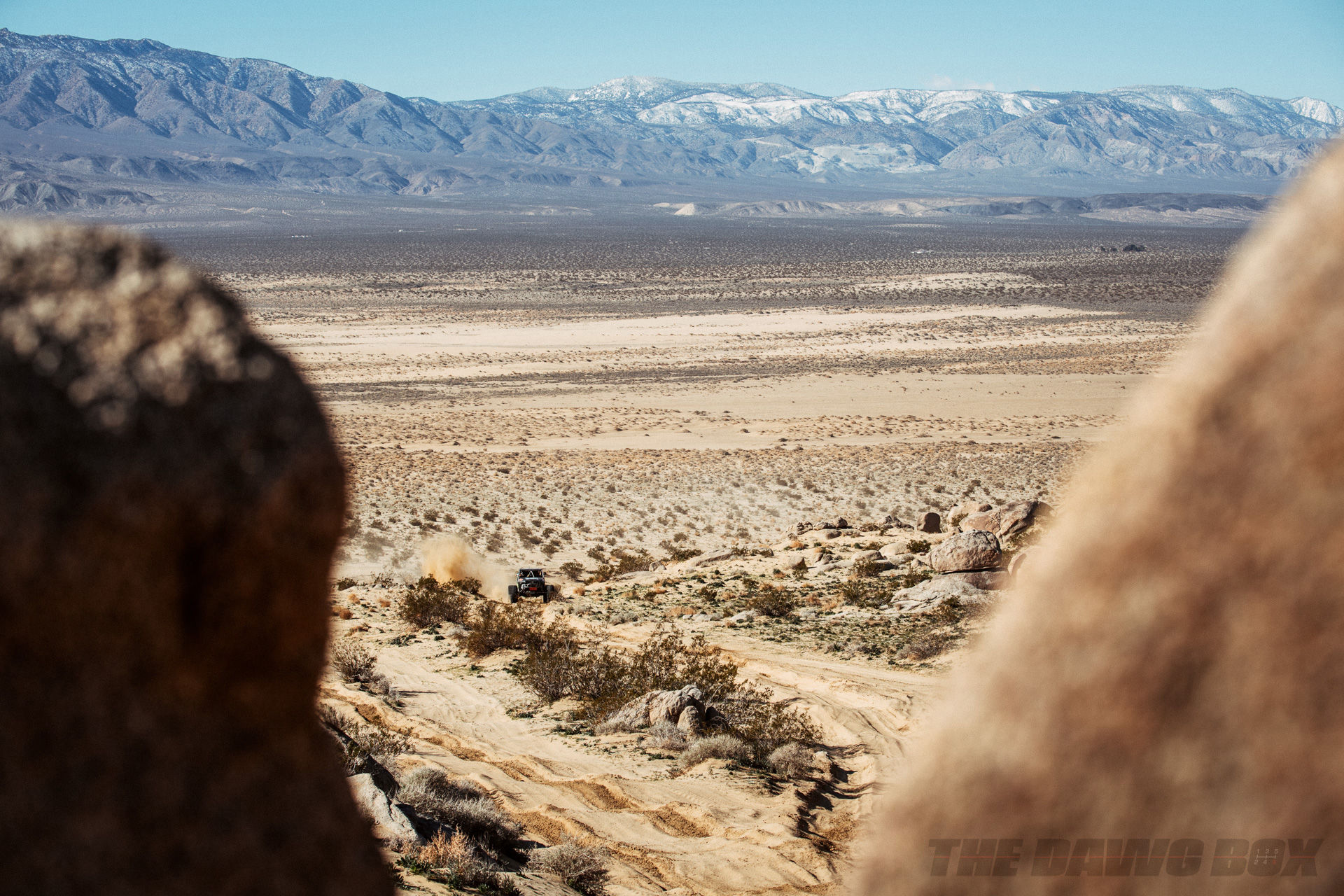 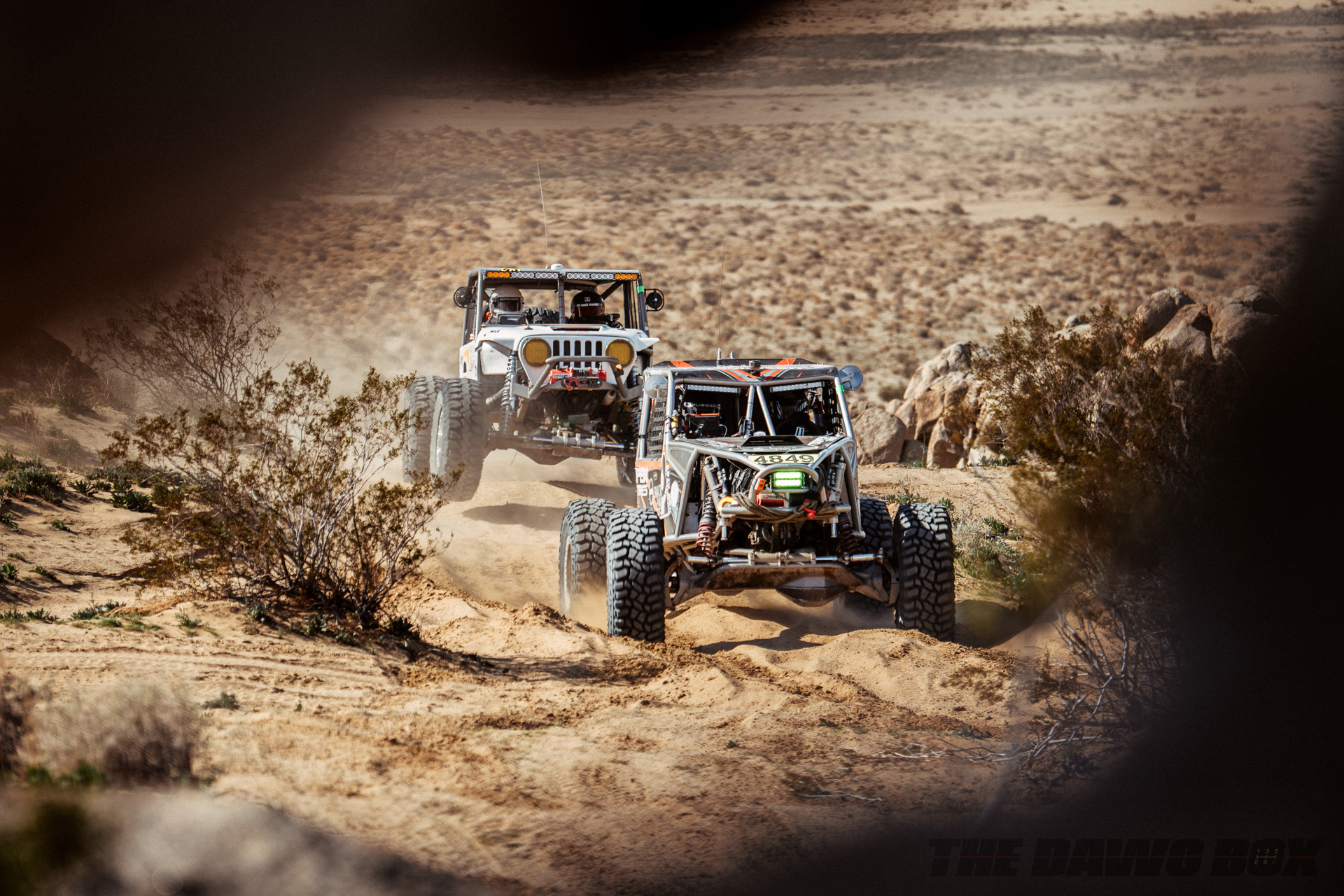 The Every Man Challenge

In the middle of 2011, Ultra4 announced that a new event would take place the Monday before the 2012 King of the Hammers—the Smittybilt Every Man Challenge (EMC) now the 4WP Every Man Challenge. This was the opportunity for non-professional drivers to race on the same course as the big event but slightly modified for the smaller tire restrictions.

…it’s not impossible to race a street legal rock crawler and potentially win in Modified Class.

It was originally open to only 100 vehicles and the list was filled before the start of 2012. The entry list has increased over the years along with the addition of 2 more classes in 2014: the Legends Class for older 4400 cars that were not as competitive and a new Spec Class. 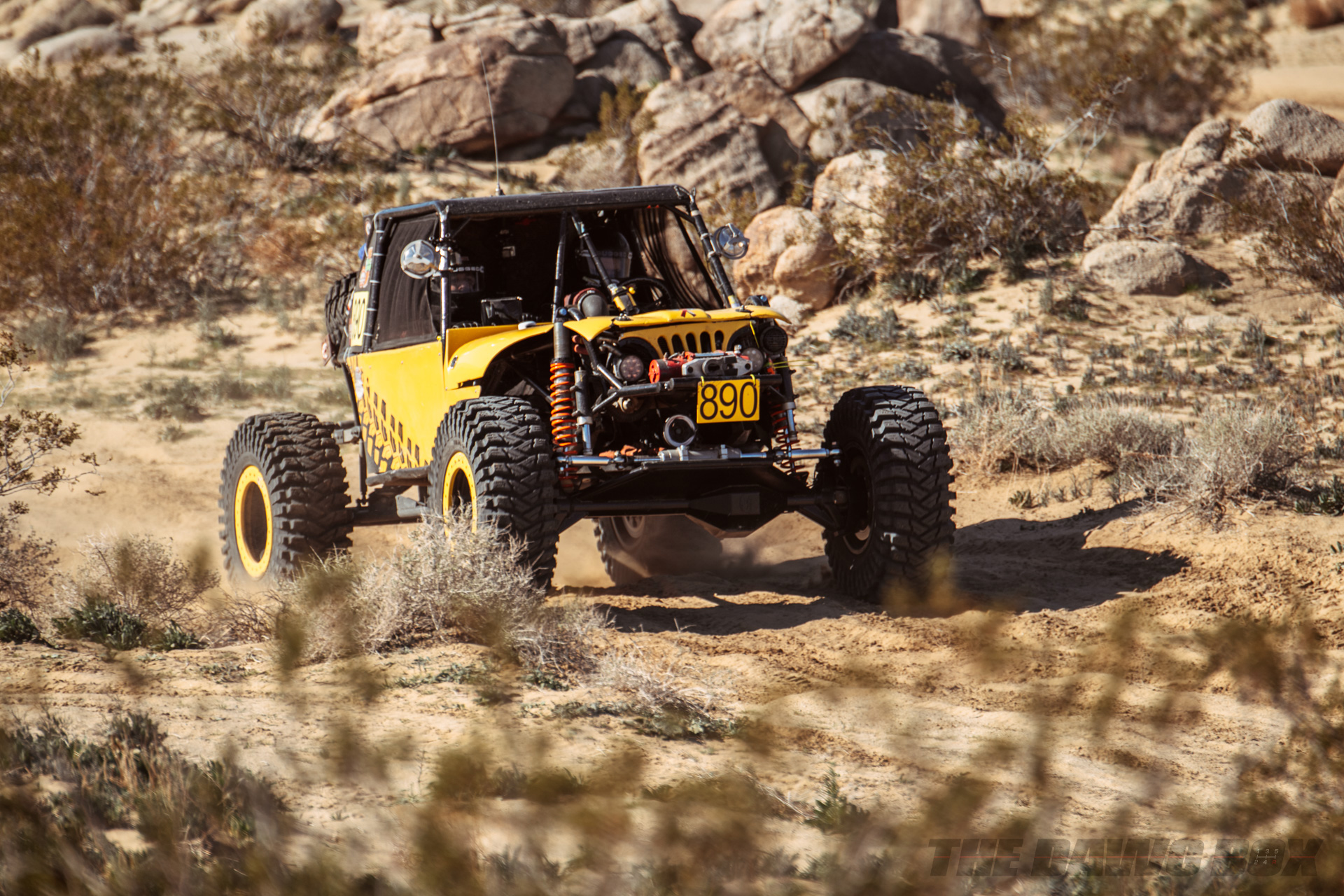 Can Someone Really Just Show Up and Run?

When it comes to the EMC at KOH, that’s somewhat how it works. Obviously, you still need to register but you can enter with your street-driven rig and race on a similar course to the Unlimited class in KOH. Doing this in the stock 4600 class is a little more realistic for a street-driven truck or Jeep, but it’s not impossible to race a street legal rock crawler and potentially win in Modified Class. 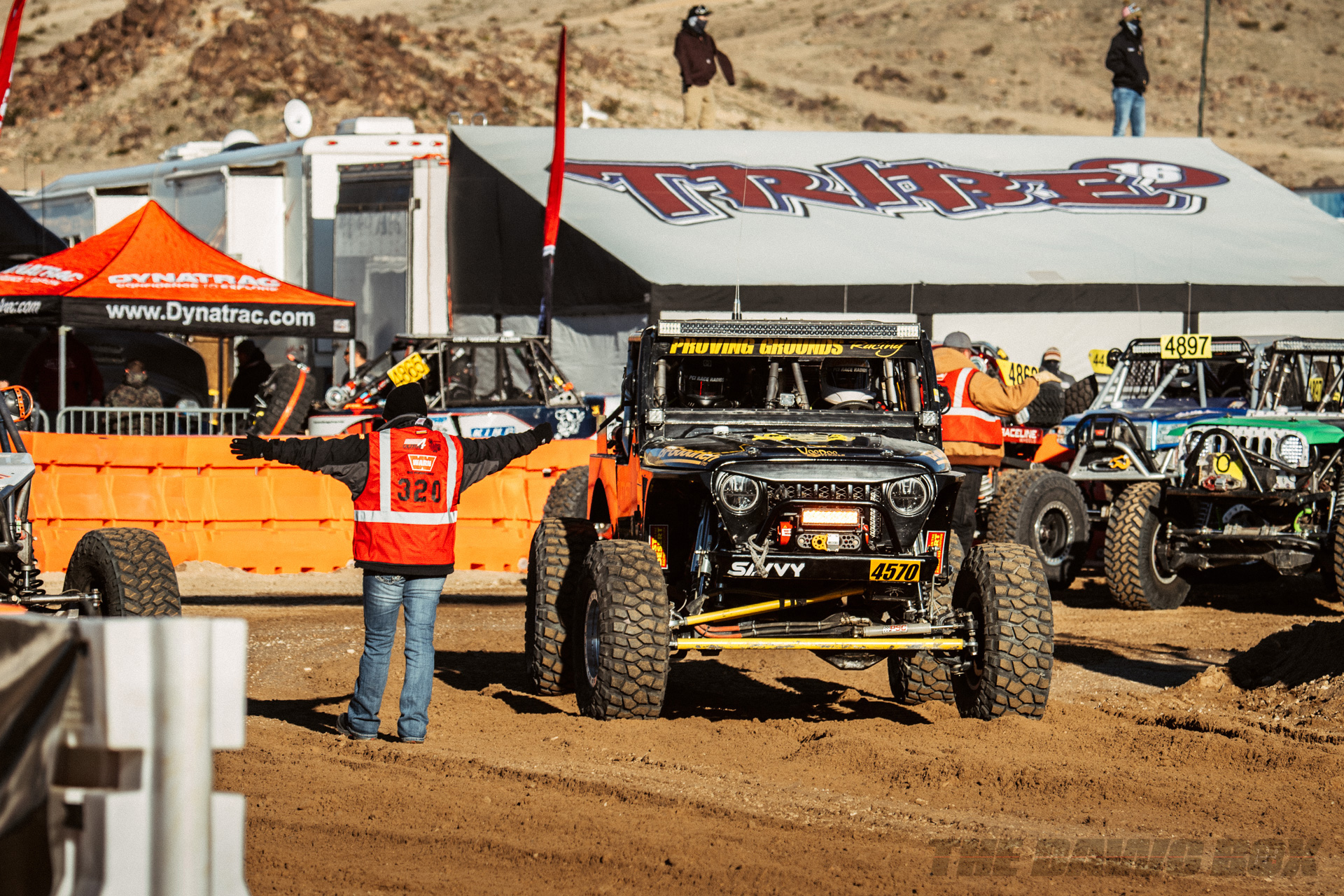 The Stock class rules are simple—and probably the most restricted at the same time. You can basically run your trail rig as long as it meets the following characteristics: stock OEM frame, factory engine, factory transmission, 35-inch DOT tires, single 2.5-inch diameter shocks per corner and mechanical steering.

If you’re looking to make a better-than-stock rig, there are two classes for you:

Essentially, the 4500 Modified class is the next step up from Stock. It’s limited in what you can do but it’s far more open and budget-friendly than the 4400s. It’s a 37-inch tall DOT tire class that also requires rigs to be steered directly by the driver. That means that there is no hydraulic steering, you’re not moving a valve to turn the tires. You can have a hydro-assist, but the steering wheel must be connected to a steering box that’s connected to the wheels.

You’re also limited to two shocks per corner that are 2.65-inches in diameter with a stroke of 14-inches. They must also be connected directly to the axle, so you can’t make a cantilever suspension or anything that would give it a mechanical advantage to increase the suspension rate to increase wheel travel. 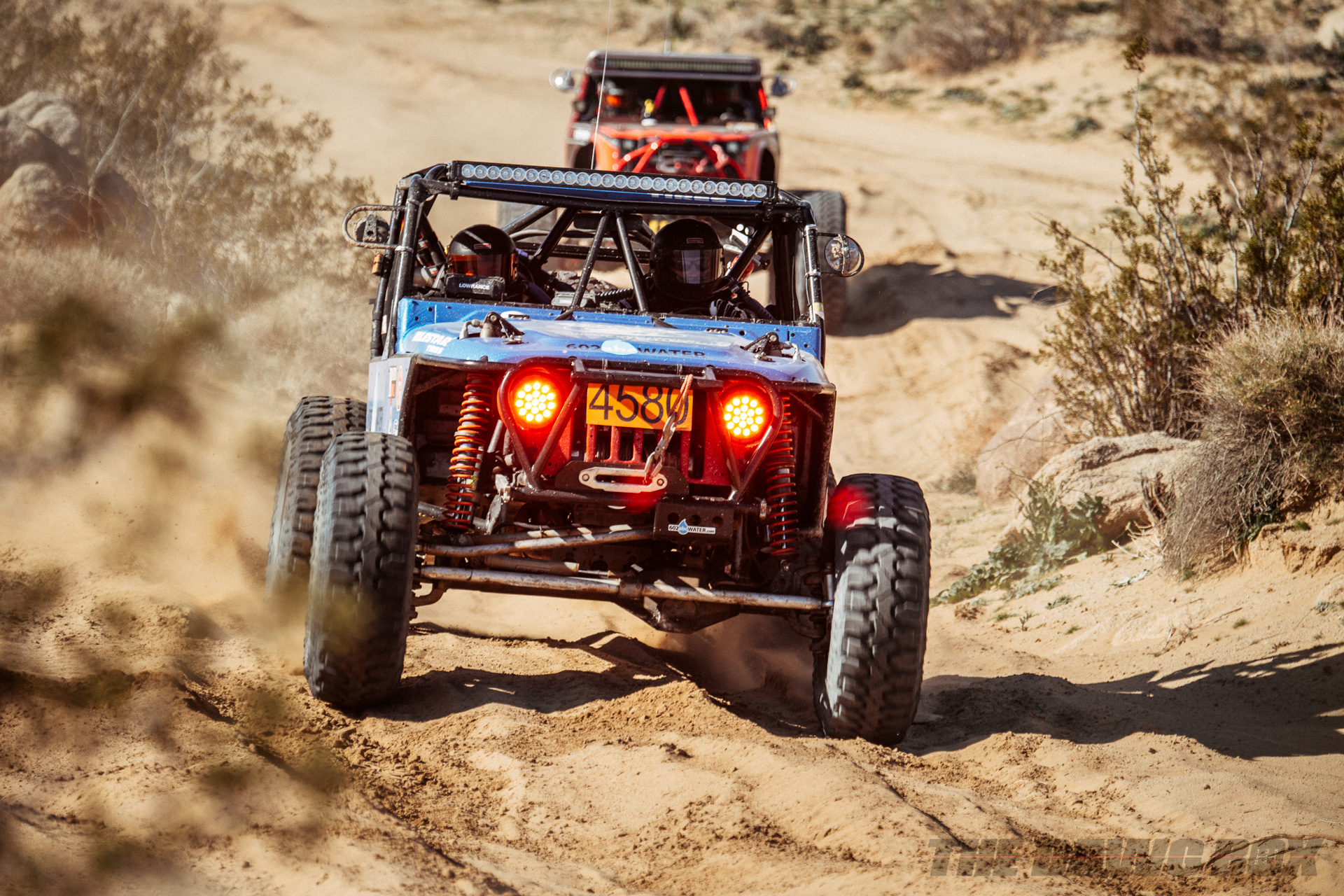 The biggest cost saver, though, is that the entry must be a production vehicle and the body must resemble an OEM body. There is also a limitation to what you can do to the frame. So, there needs to be something that replicates the cab, bed, doors, fenders, hood, and other body pieces that the original truck or SUV you’re entering as. They can be modified for clearance, but only enough for clearance. You can run any make engine and the only limitation is engine location; The rear of the engine block must be located in front of the furthest forward portion of the driver’s seat. Other than that, there isn’t much else limiting the Modified class. 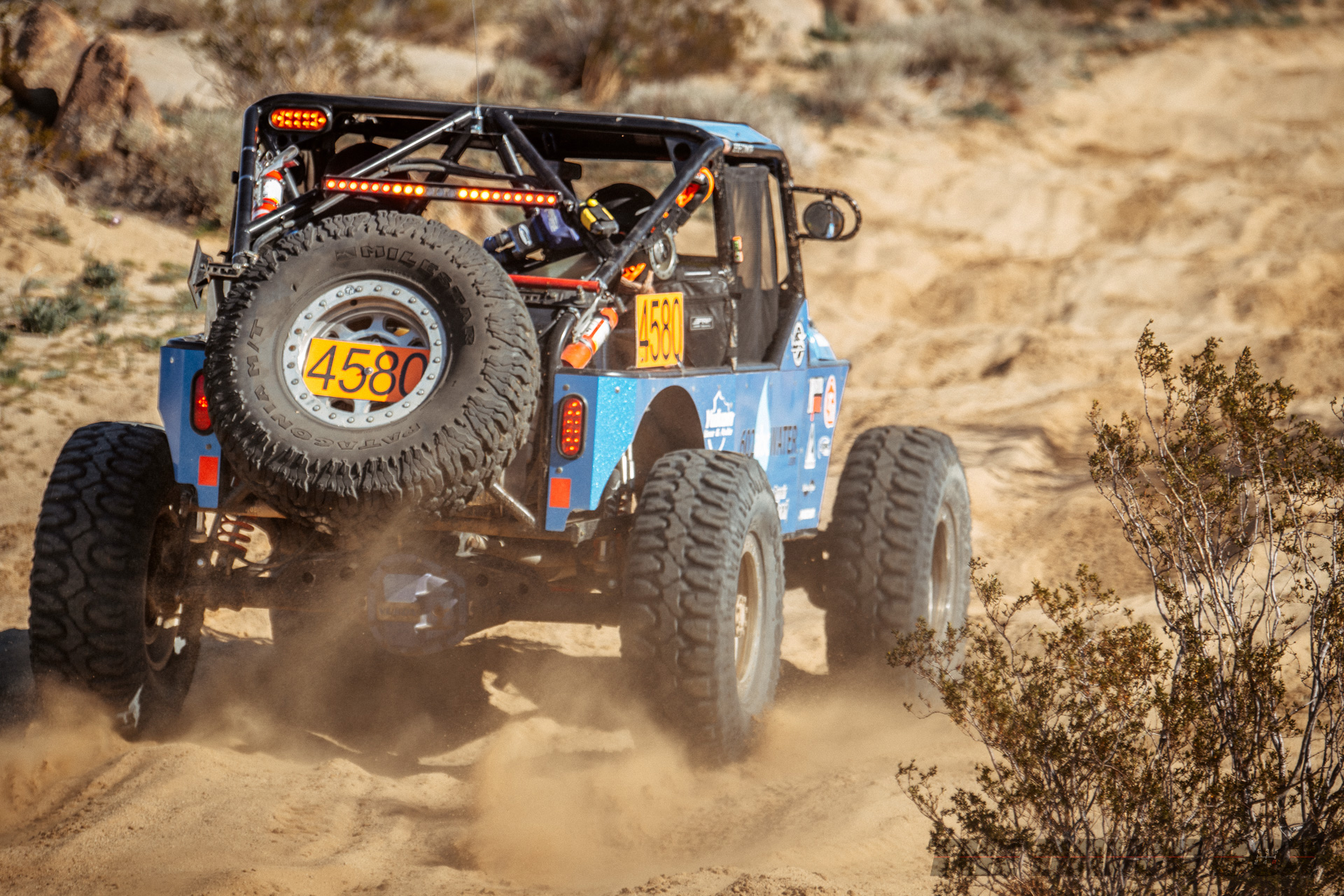 With the extreme advancement of the 4400 Class, a lot of rigs were made less competitive in a short amount of time. In recognition of that and wanting to give these rigs a place to run, the Legends class was created to allow these rigs to race. These rigs are limited to a two-seater rig with a front-engine, single shock per corner, solid axles, and 37-inch DOT tires. Other than that, there isn’t much limiting the 4800s and they are a call back to the early years of KOH. 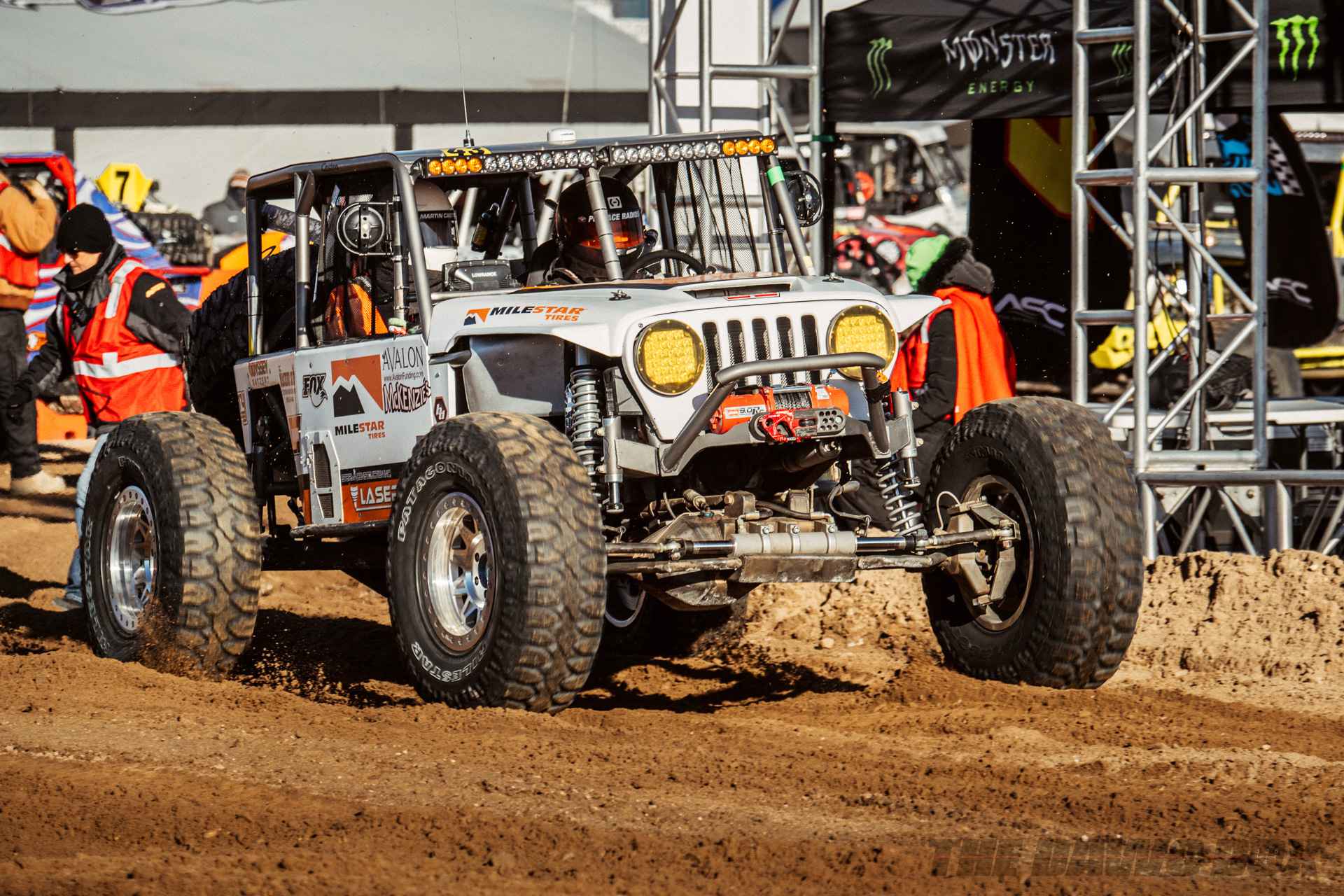 This technically makes the 4800s a much easier step up to the 4400 class and the King of the Hammers. Adding a set of longer shocks and bigger tires for that race can make these rigs rather competitive against the 4400s. Many 4800s have been rebuilt to 4400 rules without much modification, thus making them an economical way to go from EMC to KOH. Well, relatively economical considering you’re still building a $300,000 to $500,000-plus vehicle for either class. To date, though, no rig has won the EMC and the KOH in the same week. 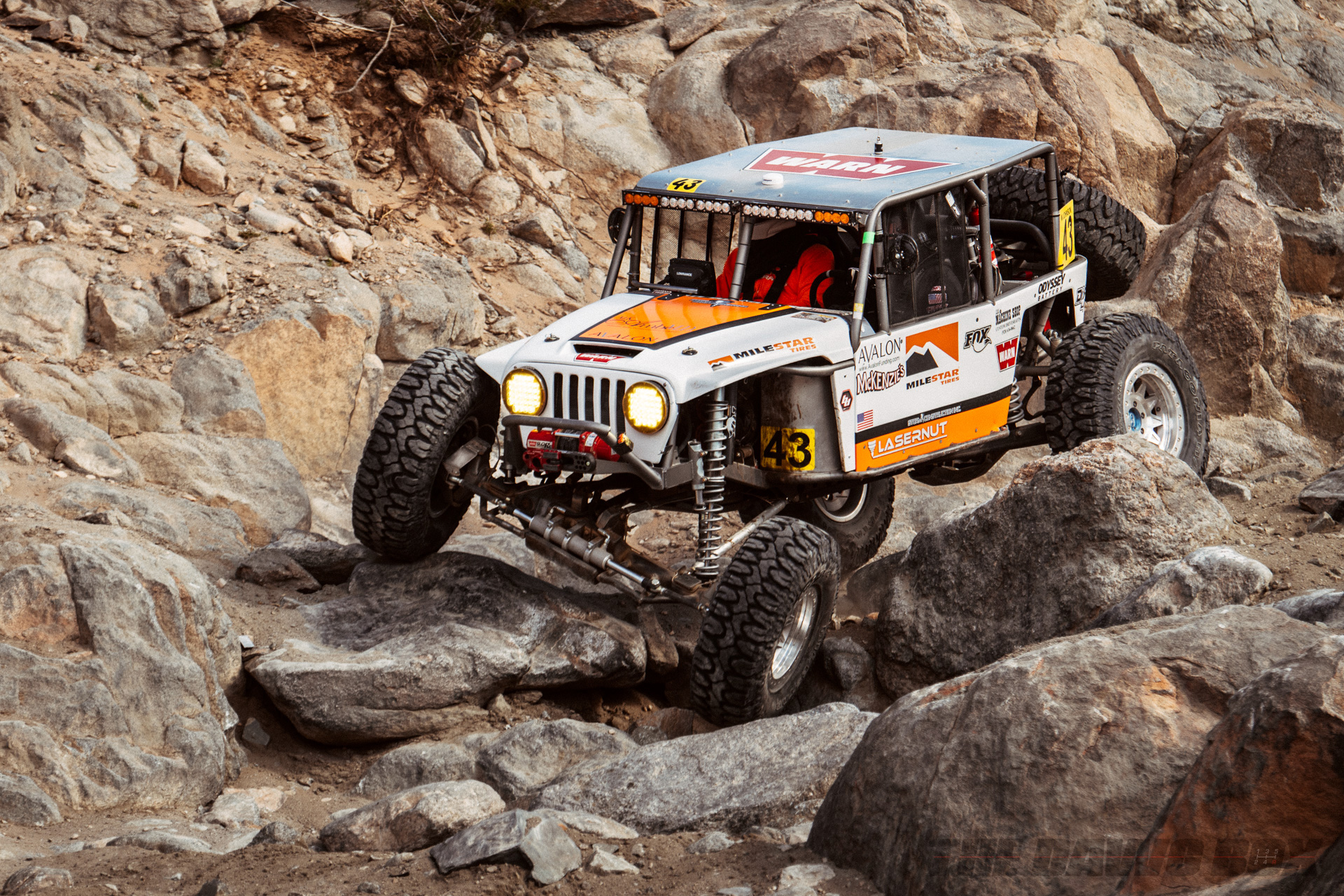 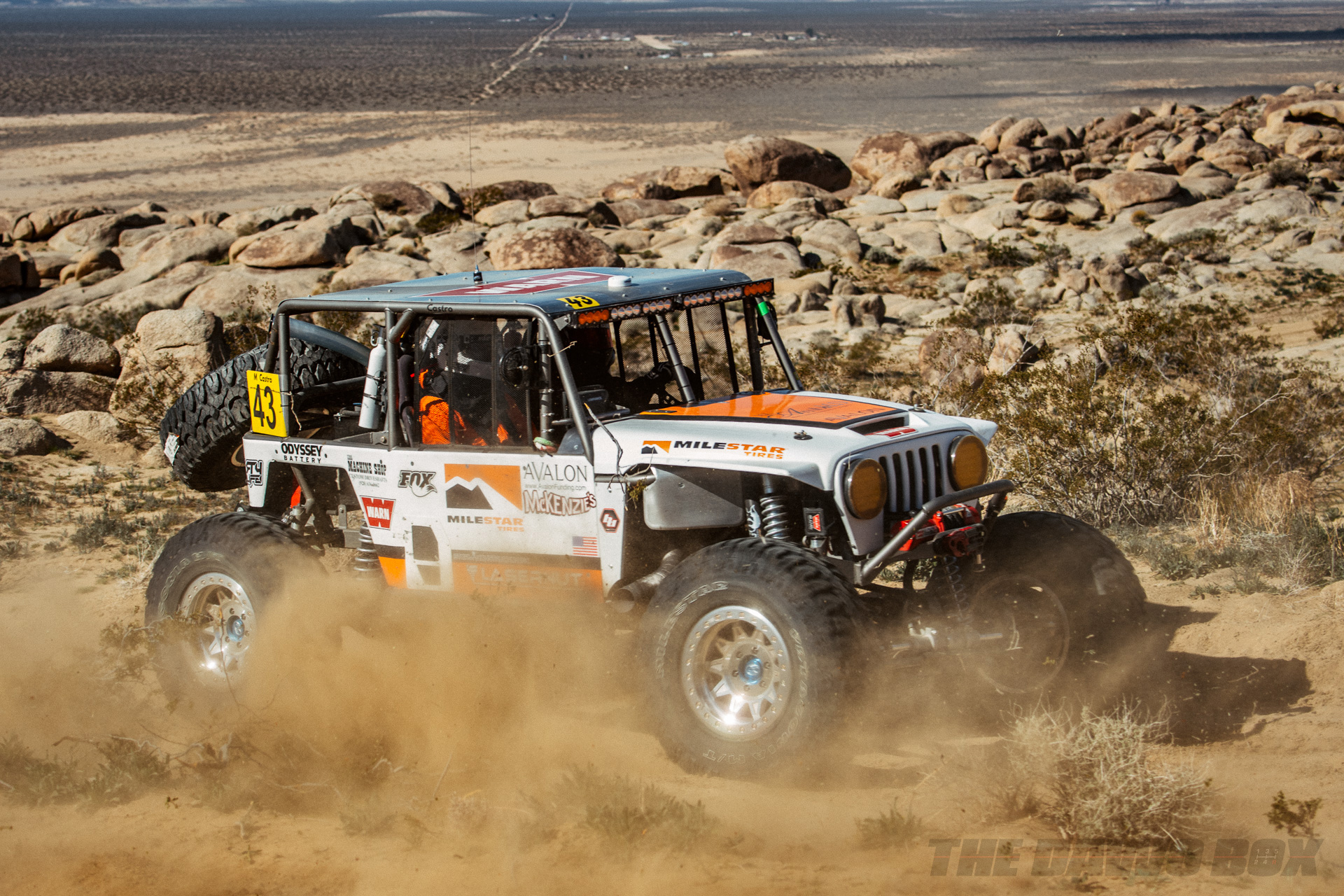 What’s great about the Every Man Challenge, it gives those who aspire to race in the King of the Hammers a place to run and prepare themselves for that big race. Even though it may be shorter than most open desert races, it’s far more brutal than the mileage indicates.

They don’t call it the Hammers for nothing.

What’s even better, anyone can enter. If you’ve got a stock, leaf-spring truck that you drive on the road but want to race it, you have a place in the EMC and the 4600 Stock Class. Even though it is the slowest class, it is the one where you’ll learn the most about Johnson Valley and the rock features they race on.

At the very least, you get a chance to race on a compact version of the course that makes up the King of the Hammers. While having a huge budget is nice, the King of the Hammers and EMC is quite possibly the last race where you can drive your vehicle to the event, race in it, and possibly drive back home if you haven’t completely torn your vehicle to shreds. However, you might want to bring a trailer just in case. 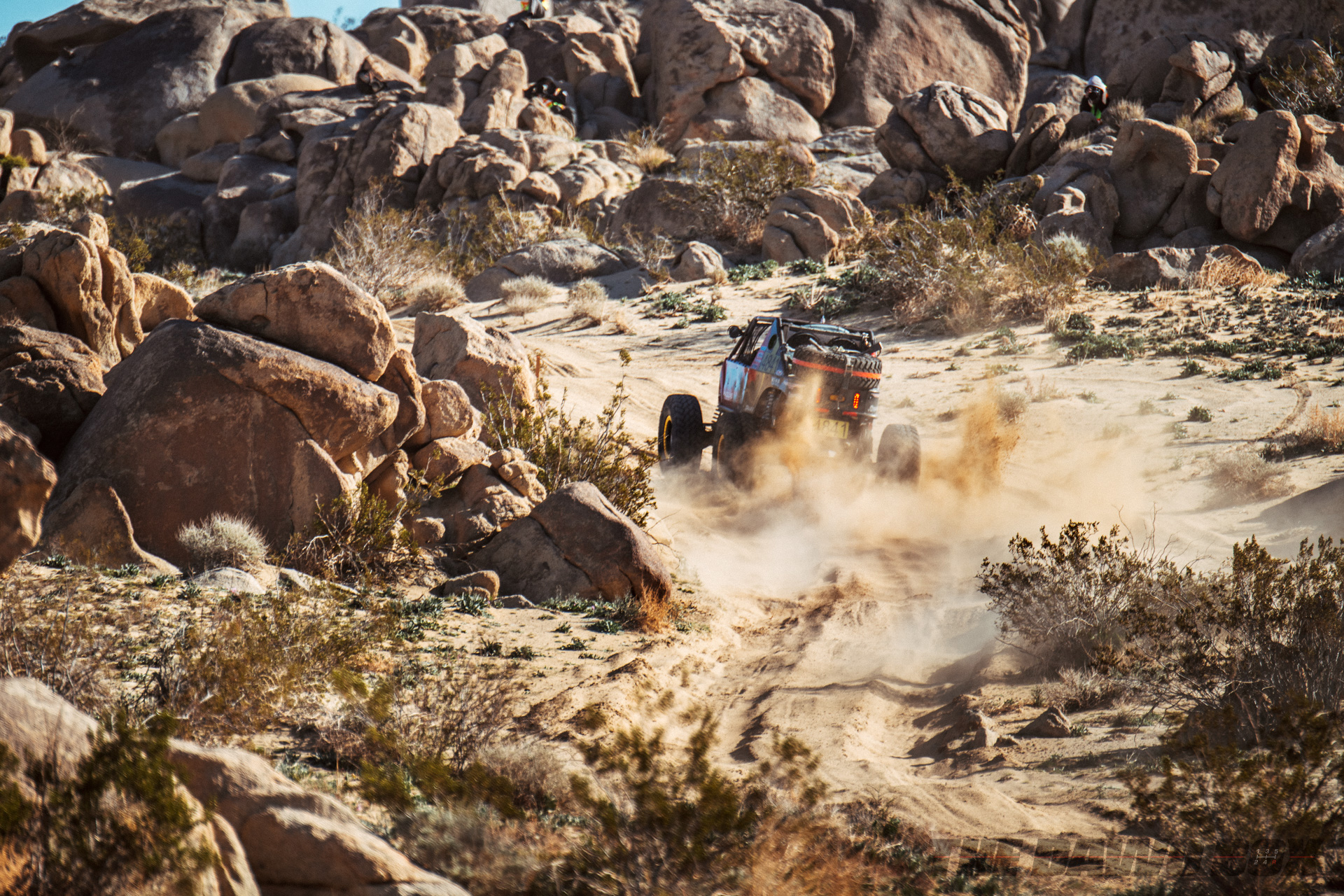 They don’t call it the Hammers for nothing.