A Look Inside the Box

For ‘tuner car’ enthusiasts, the letters G, T, and R encode a lot of information in just three characters. In the modern era, they stand for engineering sophistication and high technology harnessed in the pursuit of speed, but the first Nissan Skyline GT-R to wear them was a performance car reduced to just the basics. It was as close to the “simplicate and add lightness” mantra as any factory vehicle to come from Japan’s classic period, and it had a humble nickname to match: “Box Skyline,” or Hakosuka (“Hako” for “box” and “Suka,” short for the Japanese pronunciation of the word “skyline,” which ends up being something like “sukairain”) in the native language’s portmanteau-speak. 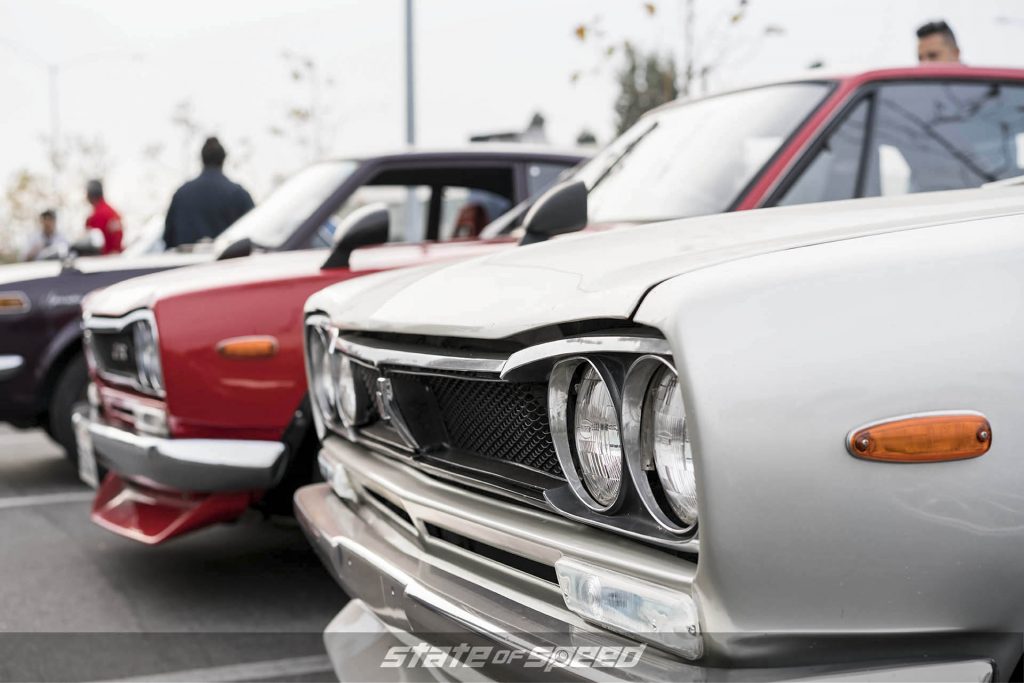 The current GT-R, introduced in 2007 for the 2008 model year, started out as an engineering showpiece intended to incorporate every bit of advanced technology Nissan could bring to bear, not just in terms of the finished car itself but in design, materials, and manufacturing as well. Over the past decade, every new update to the GT-R has pushed bleeding-edge sophistication, from the DOHC twin-turbo V6 to the dual-clutch transmission and computer-controlled all-wheel-drive system. It’s a monster, quite deserving of the “Godzilla” nickname inherited from its immediate predecessors, but a better description would be “Gundam” or “Mecha” to reflect its distinctly technological focus. In short, it’s the closest thing to a spaceship on four wheels. 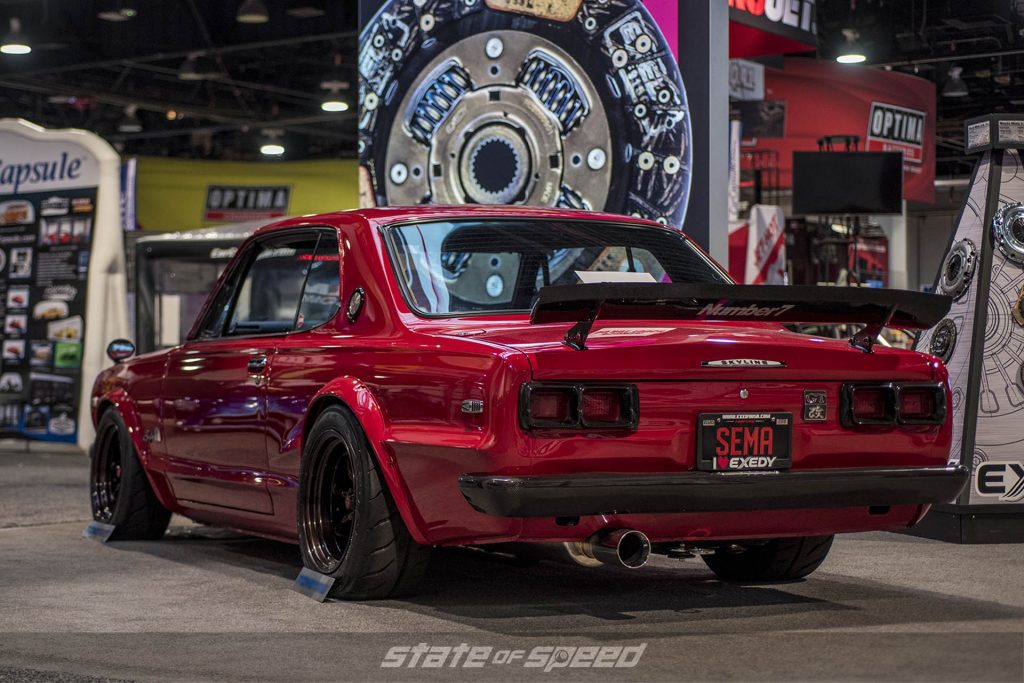 Product of a Simpler Time

It’s eye-opening, though, to compare today’s Nissan Skyline GT-R to the original Hakosuka, introduced a full fifty years ago. While the latest GT-R tips the scales at a grounded-to-the-ground 3,800 pounds and change, the Hakosuka is a mere wisp at just over 2,400. Instead of a 560+ horsepower VR38DETT, the Hako was motivated by a jewel-like S20 naturally-aspirated inline six with a full 400 fewer ponies. There’s no active torque split between the front and rear wheels in the seminal GT-R, just a limited slip differential in the rear. In fact, about the only numeric comparison the two end-points on the GT-R timeline have in common is a six-digit price tag – if you’re shopping for either the first GT-R or the latest these days, you better be ready to write a lot of zeros on that check.

One of the things that came along with Nissan’s merger with Prince Motor Company in 1966 was the Skyline nameplate; a line of sedans that debuted in 1957 and went through a number of generations that included a 1964 GT model for Japanese Grand Prix racing. For 1969, a new model was developed with the internal Nissan designation of PCG10. Dubbed the Skyline GT-R, this four-door sedan was first unveiled to the public at the Tokyo Motor Show in late 1968, and was sold exclusively through the Nissan Prince Store dealership network.

As late as the early 2000s, Nissan maintained multiple retail chains in Japan, with vehicles exclusive to each. At the time of the introduction of the Hako, the Nissan Prince Store’s counterpart was the Nissan Bluebird Store: While Prince outlets received cars like the various generations of Skyline, and later the 180SX, the Bluebird Store retailed the Fairlady Z models and the Silvia. In 1999, the descendant of the original Prince Store, which had also been titled the Saito and Cherry Store throughout its history, became Nissan Red Stage, while the original Bluebird store’s successor became Nissan Blue Stage. As seen with the 180SX and Silvia, there was a certain degree of crossover between the two main sales channels, but much like Nissan and Infiniti in the US, the idea was to separate products by price point and market focus. 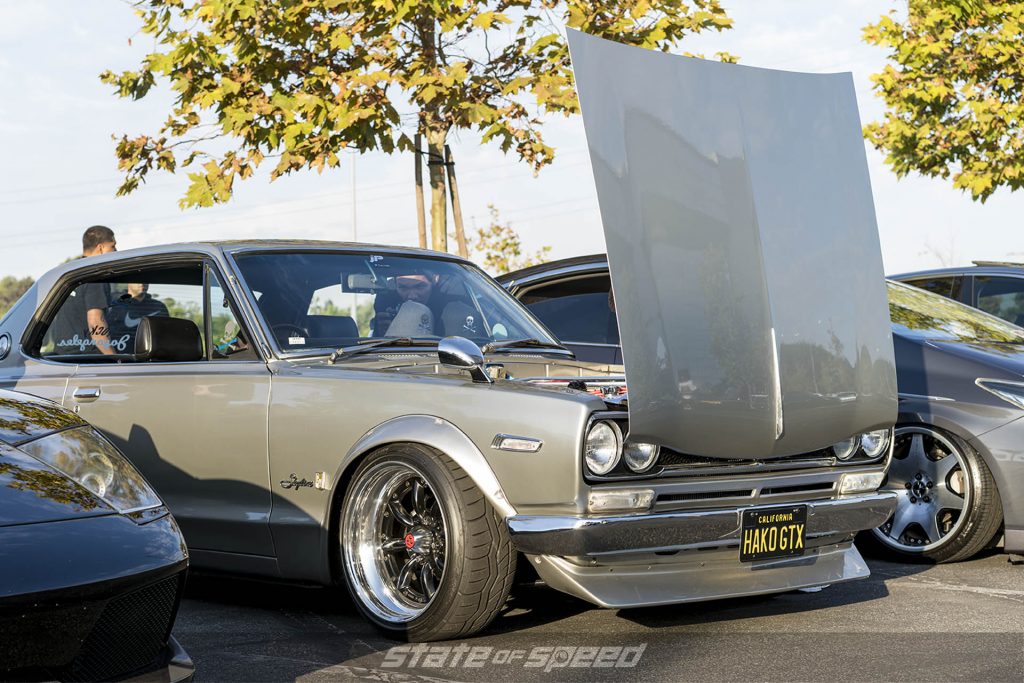 With a design penned by Shinichiro Sakurai, an engineer who had formerly worked for Prince before the merger (and who would go on to oversee future Skyline generations, the Nissan MID4 concept car project, and be inducted into the Japan Automotive Hall of Fame), the Hakosuka was intended as a performance flagship to emphasize Nissan’s racing expertise. Power was derived from the S20 inline-six, which could trace elements of its design to the GR8 competition mill utilized in Nissan’s mid-rear-engine R380 race car, which itself was derived from previous Prince G-series production engines. 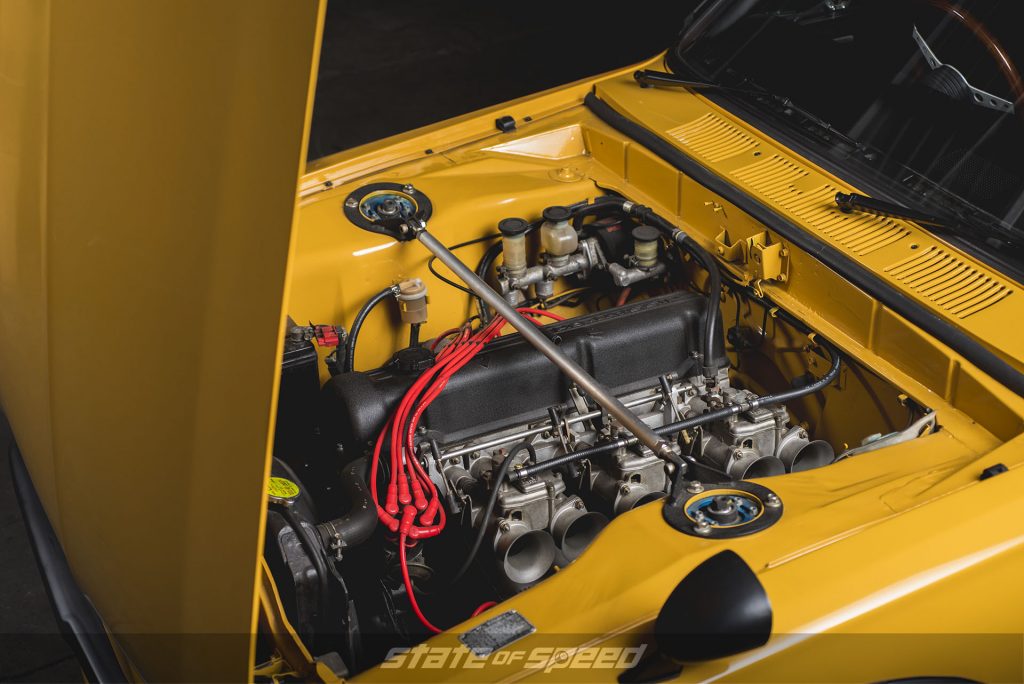 The S20 displaced 1,990cc, making it nominally a 2-liter design, with a markedly ‘oversquare’ bore to stroke ratio – pistons were 82mm in diameter and a crank throw of just under 63mm. This was necessary to provide as much room as possible in the pent-roof combustion chambers for two exhaust and two intake valves per cylinder in a DOHC cross-flow cylinder head. Induction was via a trio of two-barrel sidedraft Mikuni-Solex carburetors. In production trim, the S20 was rated at 160 peak horsepower at 7,000 RPM, and 130 pound-feet of torque at 5,600 RPM, with a 7,500 RPM redline. The entire engine package weighed just shy of 440 pounds, about 18 percent of the entire empty weight of the GT-R. You could have any transmission you wanted on your Hako, as long as you wanted a 5-speed manual. Finally, a clutch-type limited slip differential in the rearend ensured power made its way effectively to the pavement.

Instead of a 560+ horsepower VR38DETT, the Hako was motivated by a jewel-like S20 naturally-aspirated inline six with a full 400 fewer ponies.

Suspension design was sophisticated for a small sedan by the standards of the era; MacPherson struts in front, and a semi-trailing-arm independent rear. The ubiquitous MacPherson strut, patented just after the end of WWII, had the advantage of being both simpler and lighter than a double wishbone or multilink suspension, and despite often being thought of as a design intended for economy car FWD applications, it has been used with great success in a huge number of high-performance RWD applications throughout its long history as well. The semi-trailing arm rear was an effective way to accurately control suspension geometry with a minimum of complexity, and the layout combined with the light curb weight made the Hako GT-R unusually precise and rewarding when driven hard. 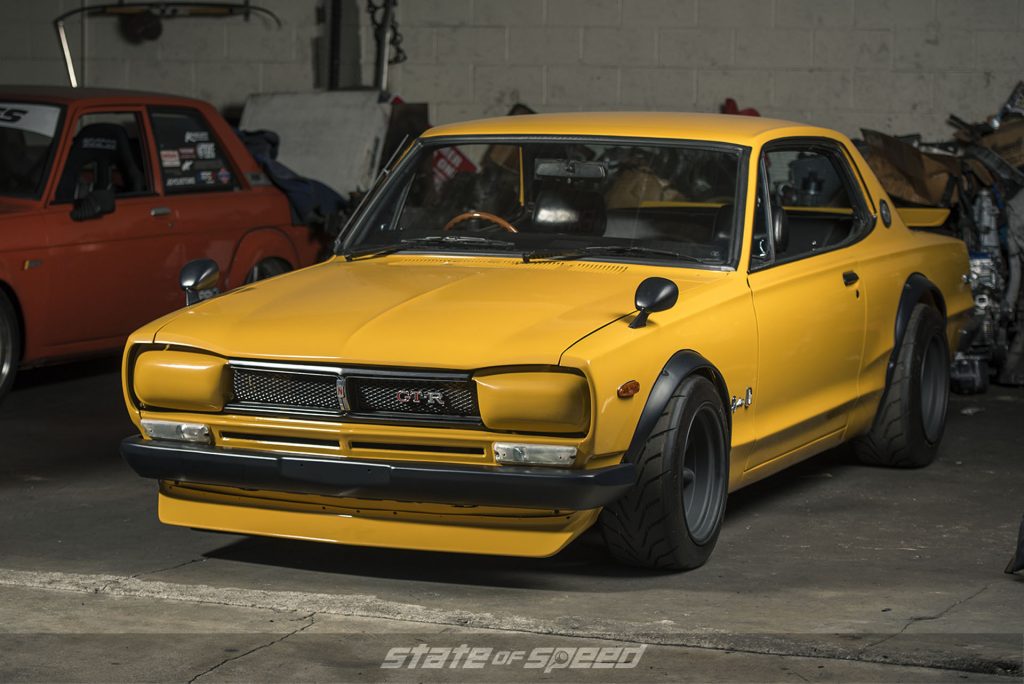 Simplicity reigned with the rest of the running gear as well. Steering was via an unassisted recirculating ball setup, and the brakes were unboosted as well. Up front, single-piston calipers squeeze vented discs, and in back, humble drum brakes help scrub speed upon demand. While that might sound archaic by current standards, the factory suspension, steering, and brake components were perfectly capable of exploring the outer limits of late-60s-tech tire grip.

The Hakosuka’s interior, while not Spartan, is definitely not overburdened with luxury touches. The upholstery and dash trim are above-average quality, with a pair of bucket seats in front and a token back seat that would be considered somewhat cramped even by JDM standards of the era. A drilled aluminum throttle pedal and a three-spoke wheel connect the driver to the machine, and the binnacle features large speedometer and tachometer gauges front and center flanked by four smaller round instrument clusters. Every Hako is right-hand-drive, of course – they were never produced in numbers that would lead to export to foreign markets (more on that in a minute) and they feature the quirky fender-mounted side view mirrors mandated by Japanese motor vehicle regulations that required placing them in a location where they could be viewed through a portion of the windows covered by the defroster vents. 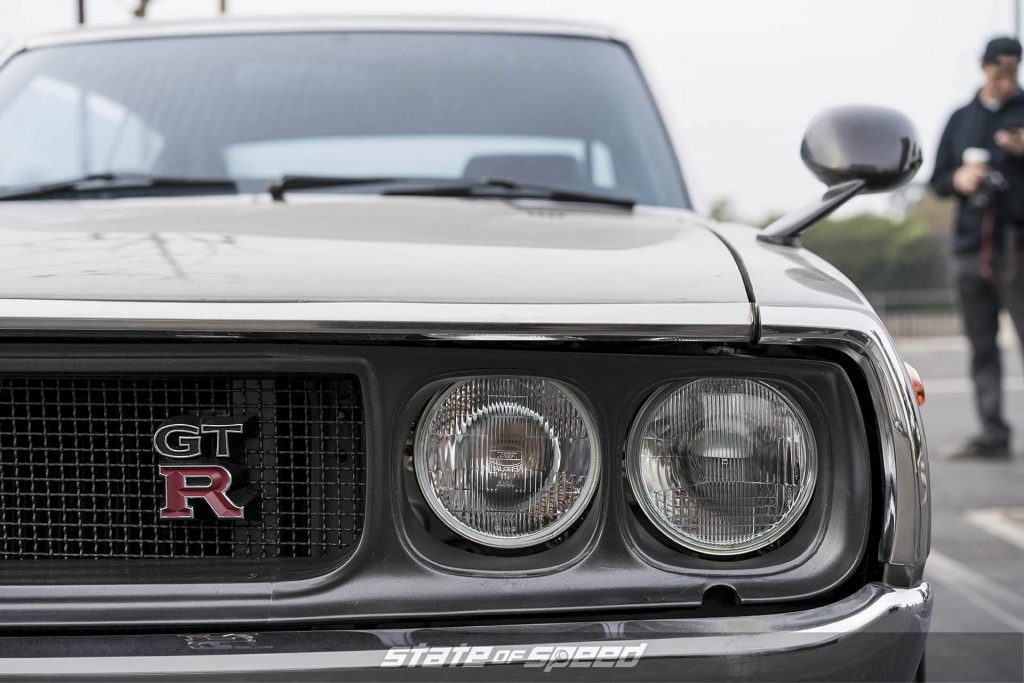 A Short but Sweet Run

The PGC10 four-door Skyline GT-R was joined in 1971 by a two-door model with the internal Nissan designation KPGC10, and production would continue through 1972. In the four years the Hakosuka was built, a mere 1,945 cars were produced (with the two-door being more common by a factor of 1.5), but the GT-R absolutely dominated the competition in Japanese touring car racing with 49 consecutive wins and 50 victories overall in a little under three years. For 1973, the Box was replaced with the KPGC110 “Kenmeri” Skyline GT-R, which gained its nickname from the fictional couple “Ken and Mary” used in Nissan advertising, but only 197 were produced. After that model year the GT-R nameplate would remain unused until 1989, but that’s a story for another time.

Today, the Hakosuka is a highly-sought-after classic, and when they trade hands at auction, prices for examples in perfect condition are in the quarter-million dollar range. That’s not too bad for a car that retailed back in the day for 1.5 million yen (about $4,200 in 1971 dollars, equivalent to the buying power of $27k today). While the Skyline GT-R nameplate took a radical turn toward technological prowess and complex engineering upon its return in 1989, the original remains one of the purest examples of a “driver’s car” from the first wave of Japanese performance automobiles 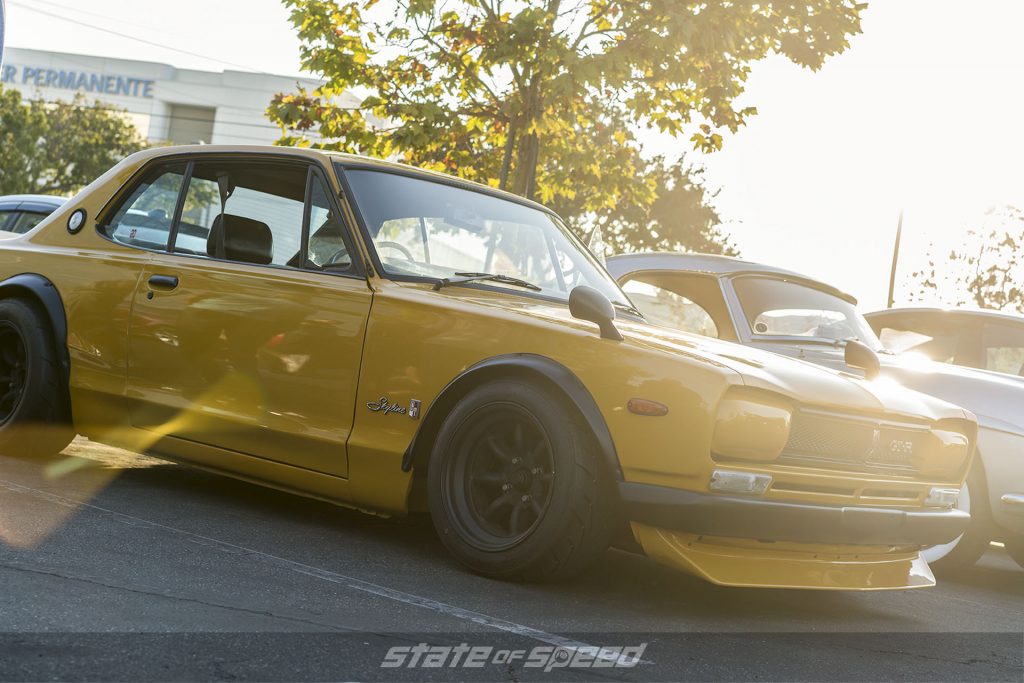