We can’t control what life throws at us; we can only roll with the punches and make the most of what we’re given. Such is the case for Jay Roxas. If it wasn’t for some unplanned unpleasantness, the Mitsubishi Evo IX you see here might never have come to be.

Our story begins more than a decade ago, when Roxas first discovered his love for Mitsubishi’s rally-bred sedan. “Ever since the Mitsubishi Evo 8 came out, I’ve always wanted the car. It had always been my goal to get one,” he recalls. Finally, in 2011 he came across a 2006 model year Mitsubishi Evo 9, and decided to pull the trigger. He didn’t want to take a piecemeal approach, explaining, “I kept it stock for about five years because I was trying to save up enough money to do it the way I wanted all at once.” 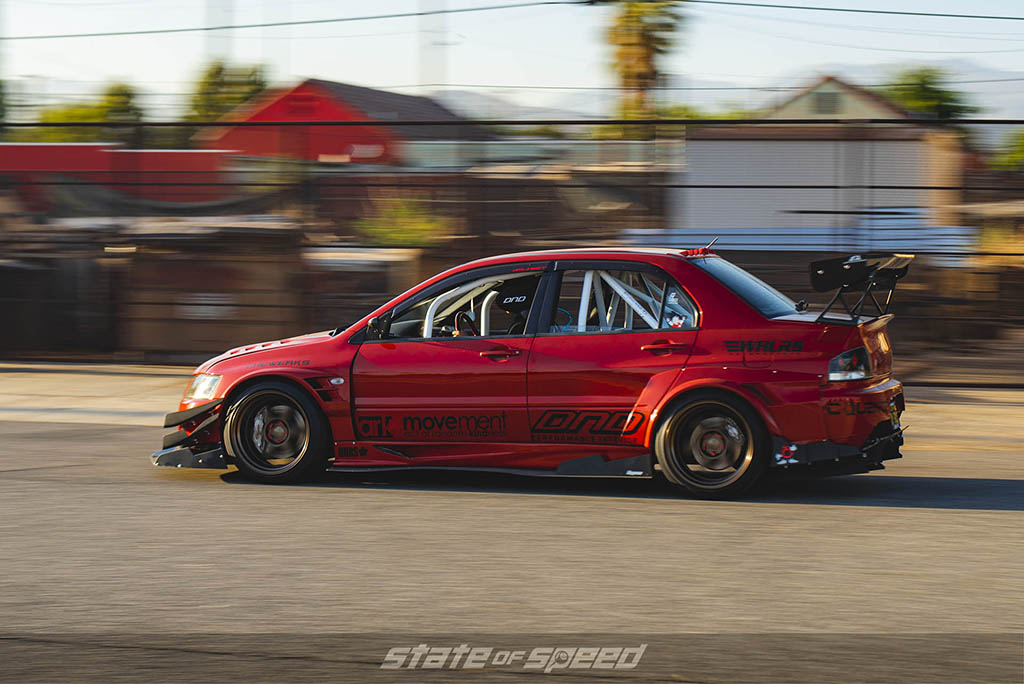 “I took the [Evo IX] into the shop, and they were backed up and busy so it was going to take a while to fix, so I just said, ‘let’s do everything’…”Jay Roxas, Evo Owner 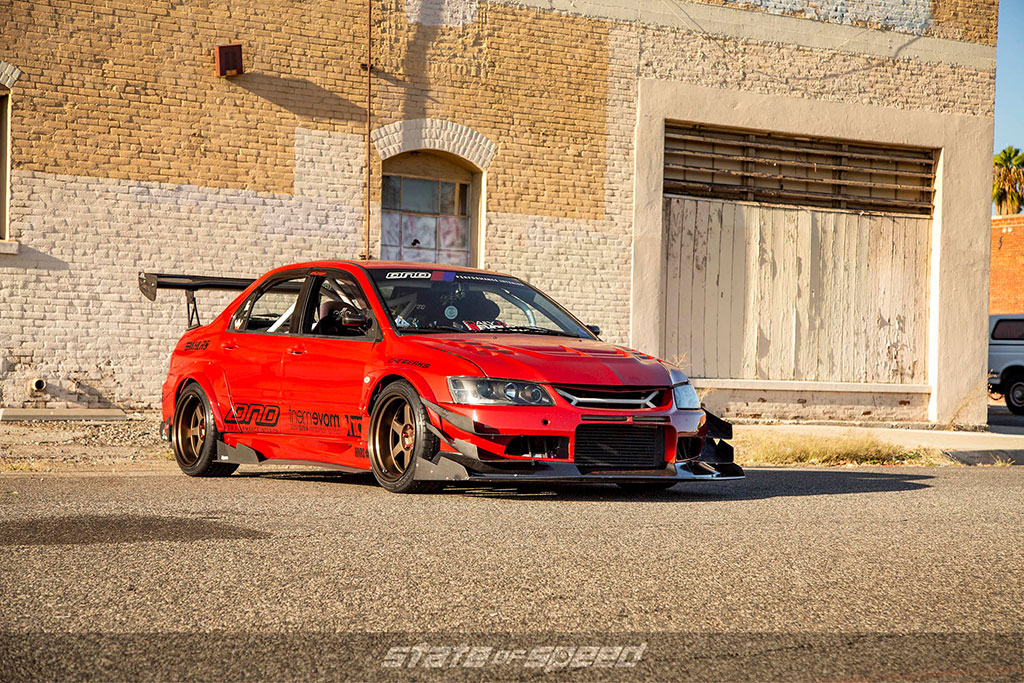 Call it fate, call it luck, call it karma, but everything happens for a reason, and in Jay’s case, a chance encounter with an irresponsible driver was the signal from the universe that it was time for the Evo to evolve. “I was actually in a hit and run, where a lady hit me from behind, and she tried to run away!” he recalls. “We chased her for like four miles, and it turned out she didn’t have insurance, didn’t have registration, and she had two kids in the car. It didn’t even have plates!” 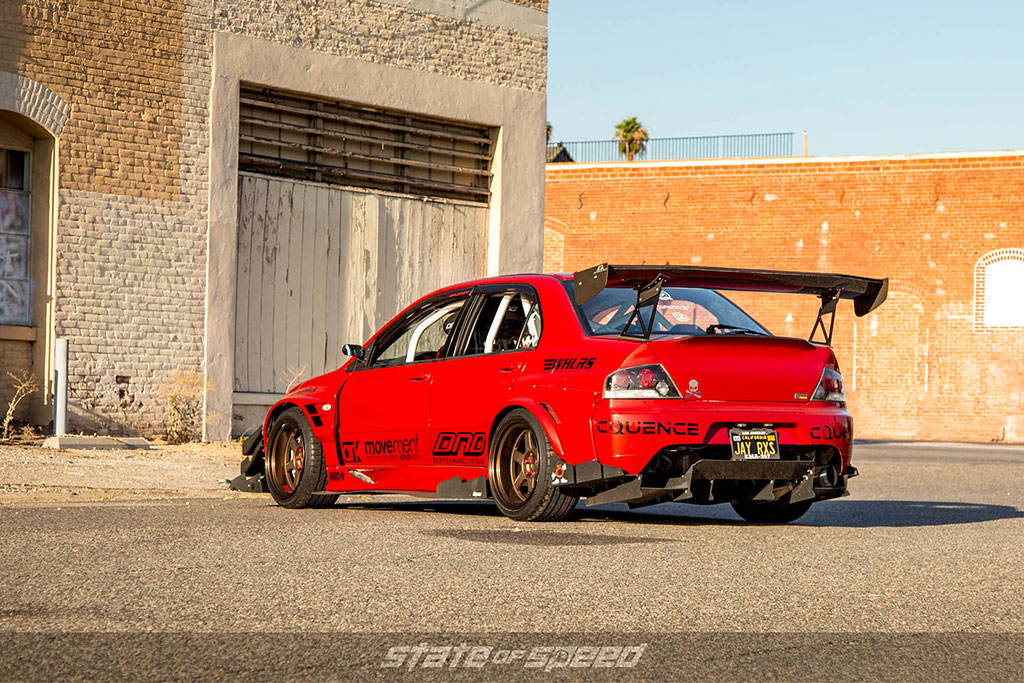 Police got involved, justice was served, but Jay’s Evo was still in need of repair, and a decision had to be made. “I took the car into the shop, and they were backed up and busy so it was going to take a while to fix, so I just said, ‘let’s do everything’,” he recalls. “Everything” started with body mods from Voltex, from the front bumper to the widebody fenders and over-fenders to the quarter panels and side skirts. VIS supplied the carbon fiber hood and trunk, and the whole car received a custom Melbourne Red Metallic respray, based on the BMW factory color.

“…it’s not going to sit in the garage. I spent too much money on it for me to just look at it…” 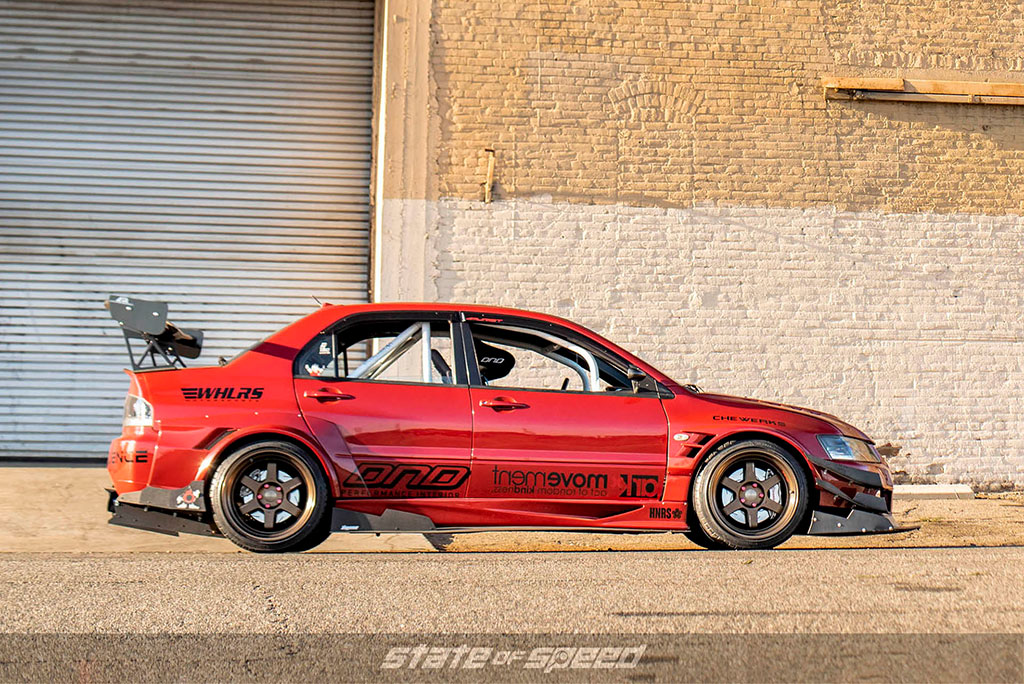 “It has a full custom diffuser, and I had a custom front splitter made because I wanted something stronger than carbon fiber that wouldn’t get beat, because I am going to drive the car – it’s not going to sit in the garage. I spent too much money on it for me to just look at it,” Jay explains. The custom touches are an intentional nod to function as well as individuality. Per Jay, “If that accident didn’t happen, my car would probably still be stock right now. If I had to do it over again without that, the car would probably be full Voltex – everything, wing, diffuser, the whole body. But in that process, I realized I wanted to put my own twist on it instead of just copying what had already been done.” 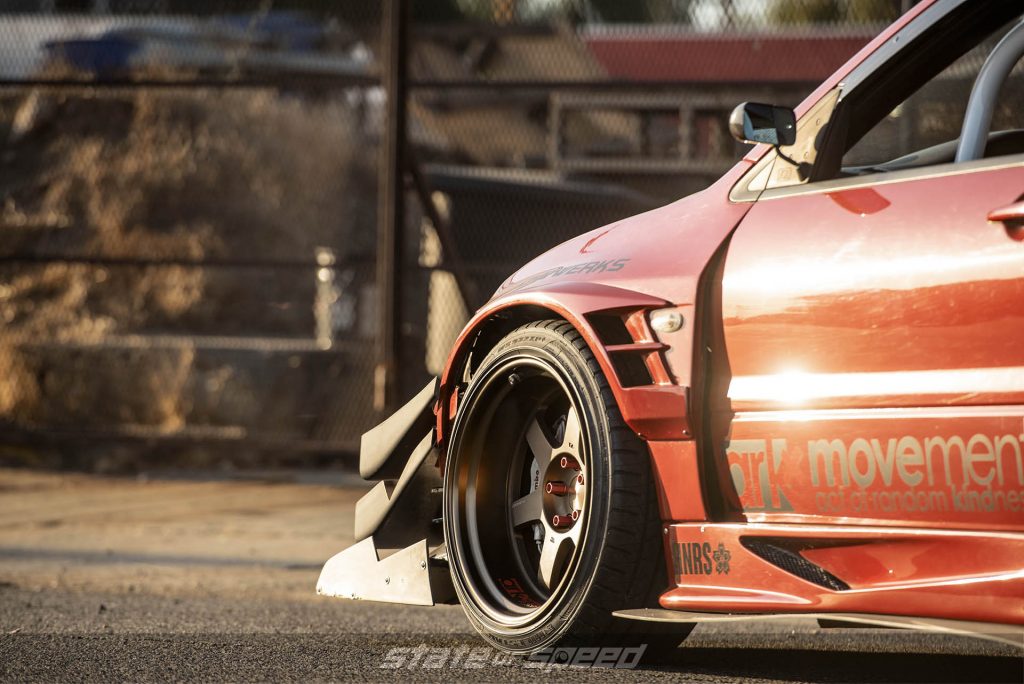 The Mitsubishi Evo IX rides on Tanabe Sustec Pro coilovers set up by Chewerks in California’s City of Industry, and is shod with Milestar 265/35R18 XP+ ultra-high performance all-season tires on all four corners. The tires are engineered to deliver exceptional handling in dry and wet conditions, as befits a rally-bred chassis tamed for the street. This is an Evo that gets driven, so having a tire that balances tread wear, dry performance, and wet grip was a critical part of the equation.

Though the 4G63 long block and factory turbo remain stock, Jay’s Evo has received a full slate of well-thought-out bolt on upgrades for additional power, including an ETS front mount intercooler and piping, a full Tomei exhaust downstream of the turbine, and a KTM 3-port boost controller. With a dual map E85 or 91 octane tune by KT Motoring, the setup is geared for a max 25 PSI boost. 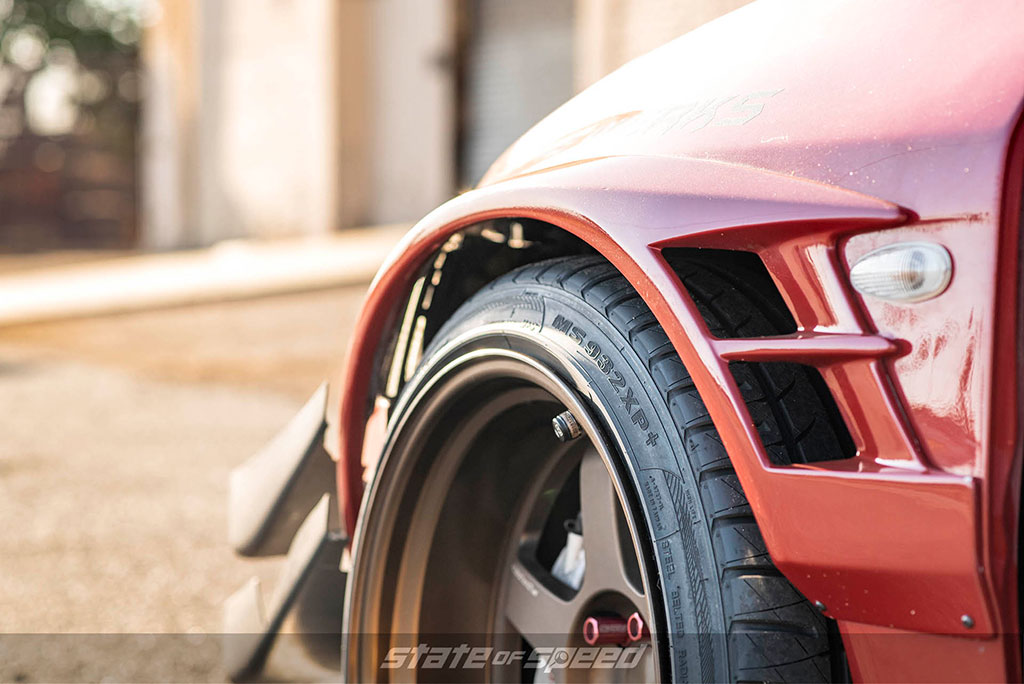 “The last time I had it on the dyno, it did 400 to the wheels, give or take, and for the track the way I use it, that’s all you really need,” Jay says. “If I want to push more than that, well, I will wait for the engine to give out and then do a full build.” In the meantime, Jay has a ride he can enjoy every time he turns the key. “In the past year, I’ve been going to nursing school, so I told myself that I have to hold off on what I do with the car,” he admits. “I don’t get to take it to the track like I did, and I will go to shows once in a while, but that’s about it. This is kind of the boring part, until I finish school.” 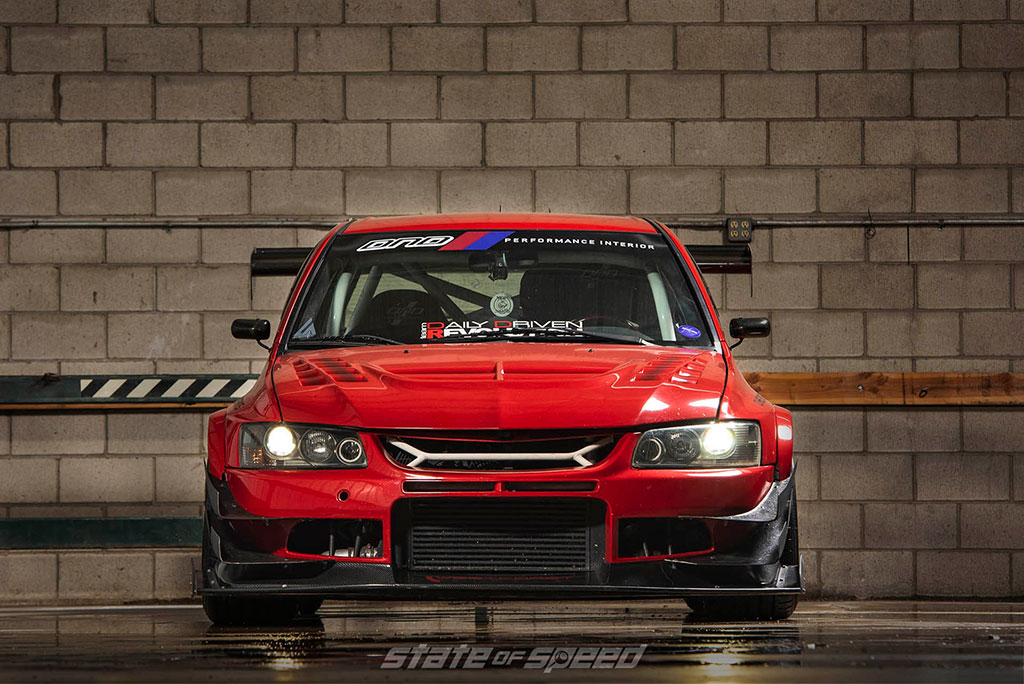 Though it sounds humble, Jay understands and appreciates what he has. “I want to focus on what’s important. The car is nice, but it isn’t my top priority. Where the car has taken me now, never was in my plan. For people to actually recognize it? Never in my plan. I wanted an Evo to track. I never thought I would be taking it to shows, and that people would invite me to bring it. I feel like it hasn’t even sunk in that people would do that.”