Benton Performance: From the Ashes

In early November 2019, a perfect storm of a vehicle fire on an adjacent lot, a tank of stored diesel that collapsed and fed the flames, and California’s unpredictably predictable winds ravaged one of the world’s premiere vintage Porsche restoration and repair shops. Four months later, John Benton is ready to open his doors once more. Here’s what it took to go from disaster to a new beginning.

“The ambient temperature in the voids was 2,200 degrees. It reduced a Bridgeport mill to scrap. It made cast iron give up. It was pretty intense heat.”John Benton

By now, you may have heard the story of how an out-of-control late night fire fanned by 40+ mile per hour winds consumed a major portion of Benton Performance in Anaheim, California. For more than 35 years, John Benton and his crew have been repairing, restoring, stockpiling original parts for, and otherwise loving air-cooled Porsches. While the disaster didn’t claim all of Benton’s property, it hit his inventory particularly hard. 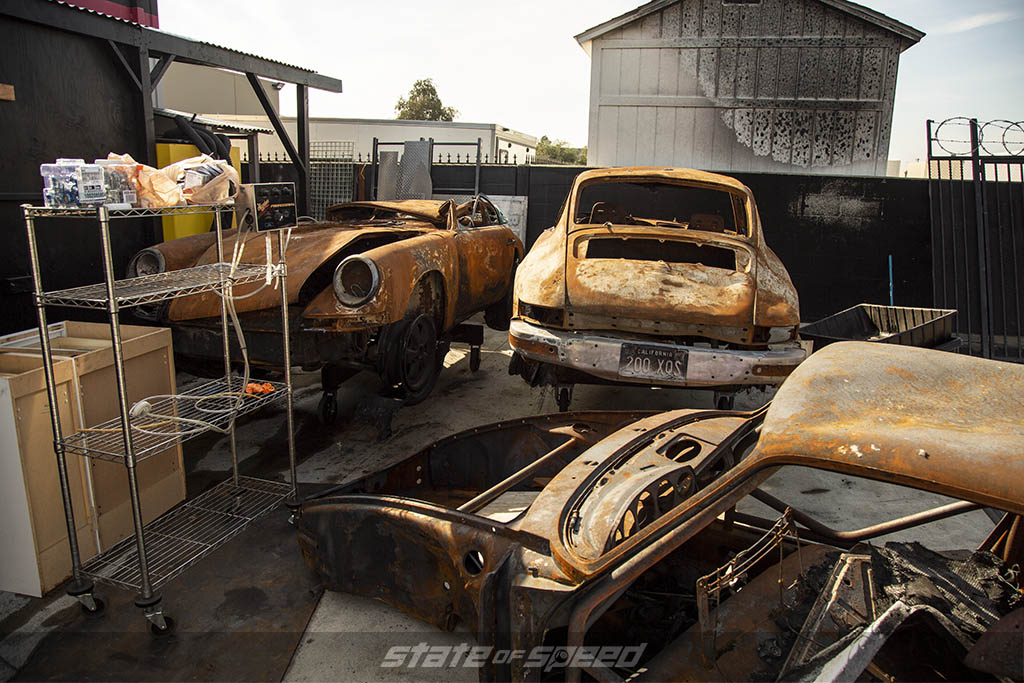 “There was nothing that was salvageable,” Benton explains. “The ambient temperature in the voids was 2,200 degrees. It reduced a Bridgeport mill to scrap. It made cast iron give up. It was pretty intense heat. When you have a steel building with magnesium as the main energy source going off, and 40 mile per hour winds going through it, it’s a convection oven. Every steel beam in the frame of the building was sagging. All the tension cables were sagging.”

Before even a rough estimate of the damage could be made, the remains of the buildings had to be inspected and made safe for people to enter. Then the hard work began. 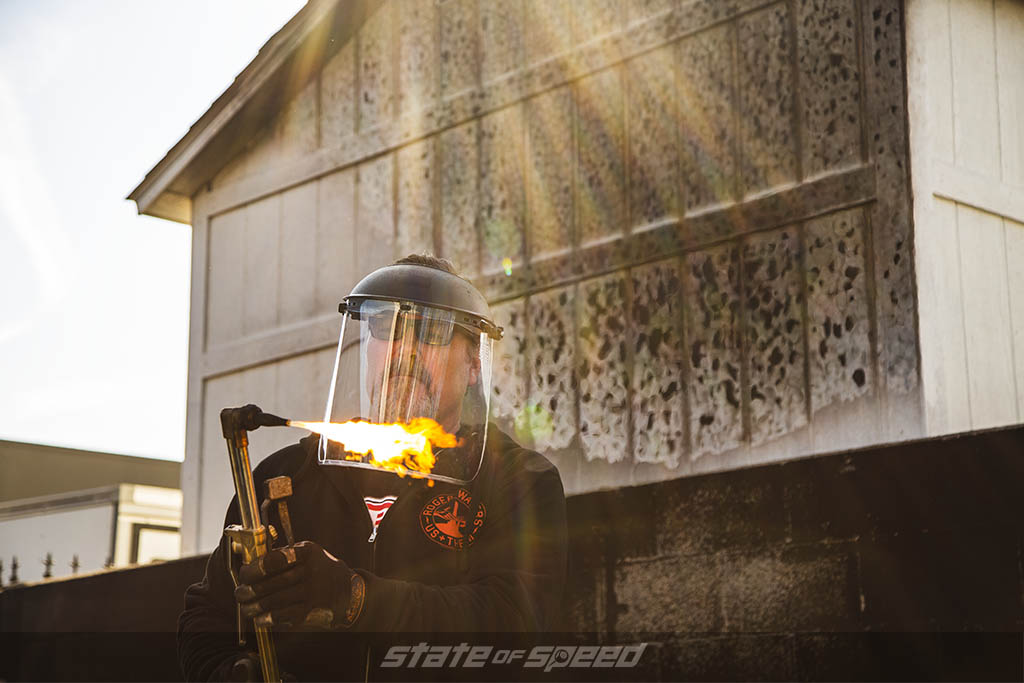 Per Benton, “Once we emptied the building, then we began cleaning, and it was a mess. We looked like coal miners. Then we had to disassemble the building, filling these 20-yard roll-offs with steel and debris. I was running a cutting torch, and I haven’t done that work since I was a young man, but I’ve done it, so it was just a matter of relying on muscle memory and telling the guys, ‘cut here, cut there, let’s get this into pieces’ and little by little we did it.” 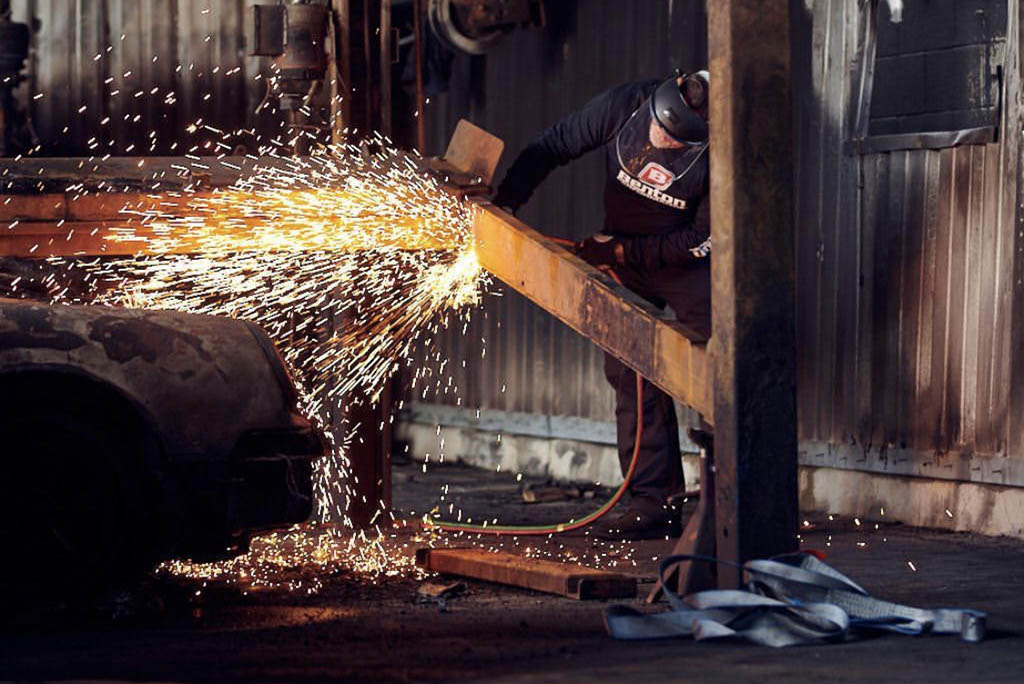 “I don’t ever anticipate accumulating $2 million of new old stock stuff again, because I’m never going to find that stuff.”

“Finally, we had a concrete pad, and then it started raining! I was undeterred, though,” he continues. “The next challenge was getting the residue out of the concrete because we knew we were going to have an open pad, since it wasn’t going to be hidden beneath flooring. It had taken some damage, and it was pretty scored in spots, so I rented a core cutter and a jackhammer and cut out the one big section that was damaged, then side drilled, laid rebar, and poured new concrete. Once that was done, we got the three 20 foot containers delivered, and started building a perimeter wall with a gate. So now we have this beautiful facade that opens up into a courtyard with our three big containers.”

Those containers are where Benton Performance’s inventory will reside now, though it will only be a shadow of what was on-hand before. “I don’t ever anticipate accumulating $2 million of new old stock stuff again, because I’m never going to find that stuff,” Benton admits. “I have procured a lot of choice parts over the years, and when we used them I would always go looking for more. I know where to find them, and I will get what I need to get, but I don’t anticipate stockpiling them ever again.” 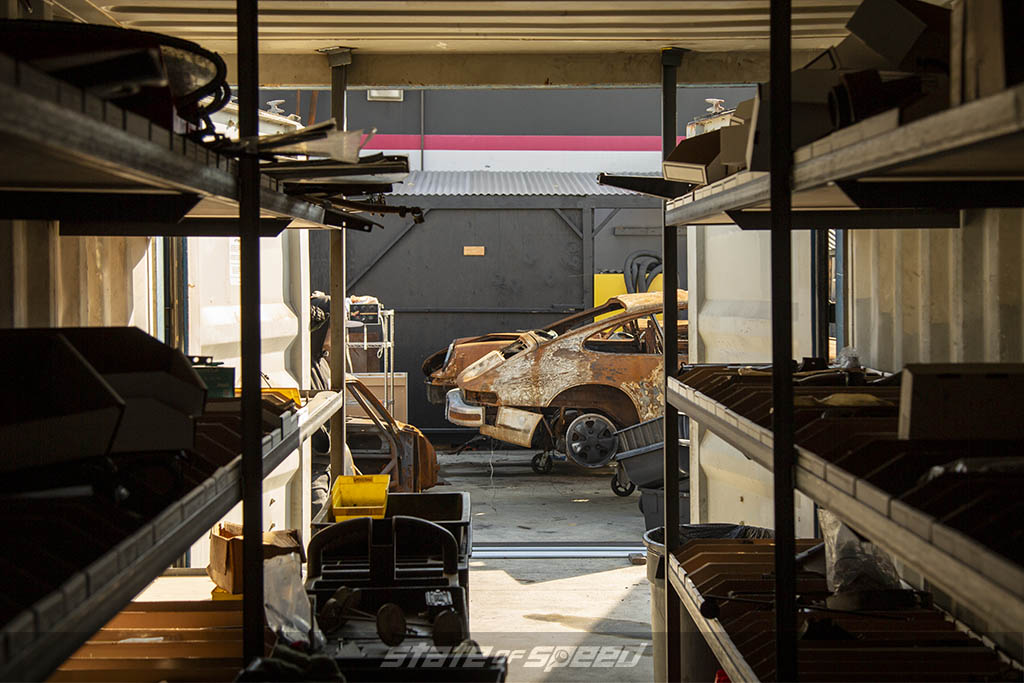 Fortunately, Benton didn’t have to start from zero, and the relationships he’s built over the past four decades gave him a running start. 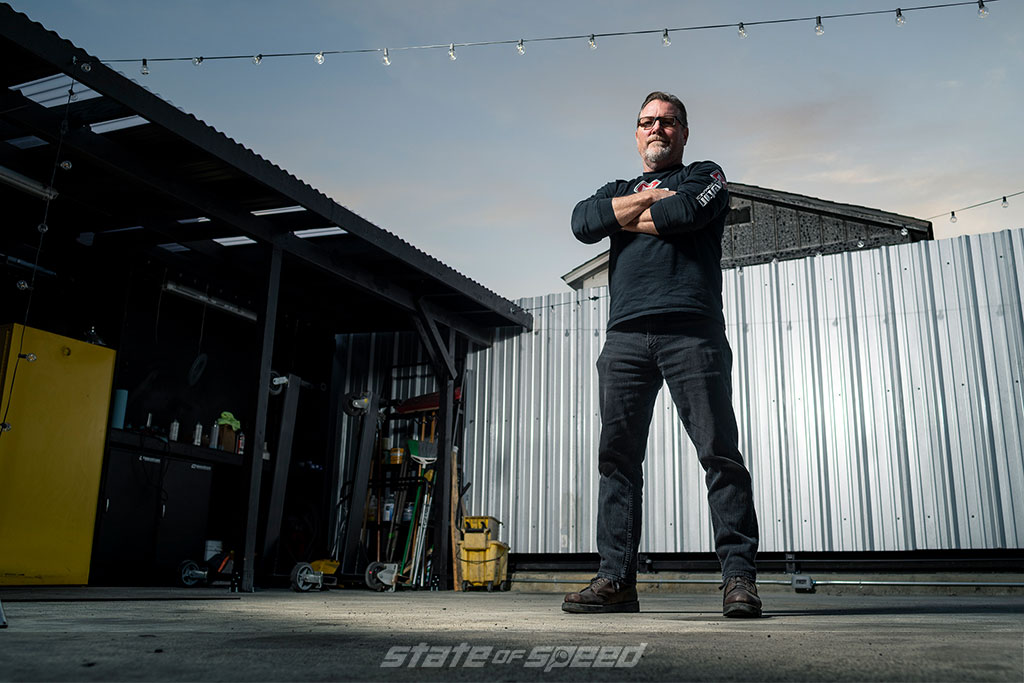 “I had some stuff at my house, and I had some stuff in a separate storage unit, but not much. I had my clean room here, so there were a lot of choice parts for builds that were taking place. But people in the community have been very, very nice and donated some startup parts. Jack [Diramarian] from Scientific [Motorcars] in Pasadena, had one of his guys come over in a pickup that was full of vintage 4-banger parts.

It’s not big stuff – it was parts that need some work, but we’re good at that. We got some head cores, and some case cores, rods, carburetors, manifolds – just stuff that will make an impact. If we can build one or two motors out of that, that gets us to the next place, and we go on from there,” he explains.

“We built this shop off of our people, and we have to keep the team intact.”John Benton

The term “human resources” is almost a punchline in the corporate world, but for small businesses like Benton Performance, the people who make things run are literally the most important asset.

“I have six guys who depend on this business for their livelihood, and they are the driving factor behind my decisions,” says Benton, with the pride evident in his voice. “We built this shop off of our people, and we have to keep the team intact. After a couple of days when it finally sunk in that we weren’t functional and it was just a debris field, everyone was kind of under a black cloud. So we all went out back, and I said look, every single one of you guys has come to me over the last five, ten, twelve years and said, I want this, I want that, how come we don’t have this? I want a list. I don’t care how long it is – I want to know. We will find a way. We might be dead in the water now, but we are going to do it right.”

But the favorite thing I did was hang a disco ball above bay 1 with four spotlights on it, because when I flip that switch on, it makes me smile.”John Benton

The result was a reborn business, designed with the input of all the key players to make it more efficient than the old layout, better for customers, and a more pleasant place to work. 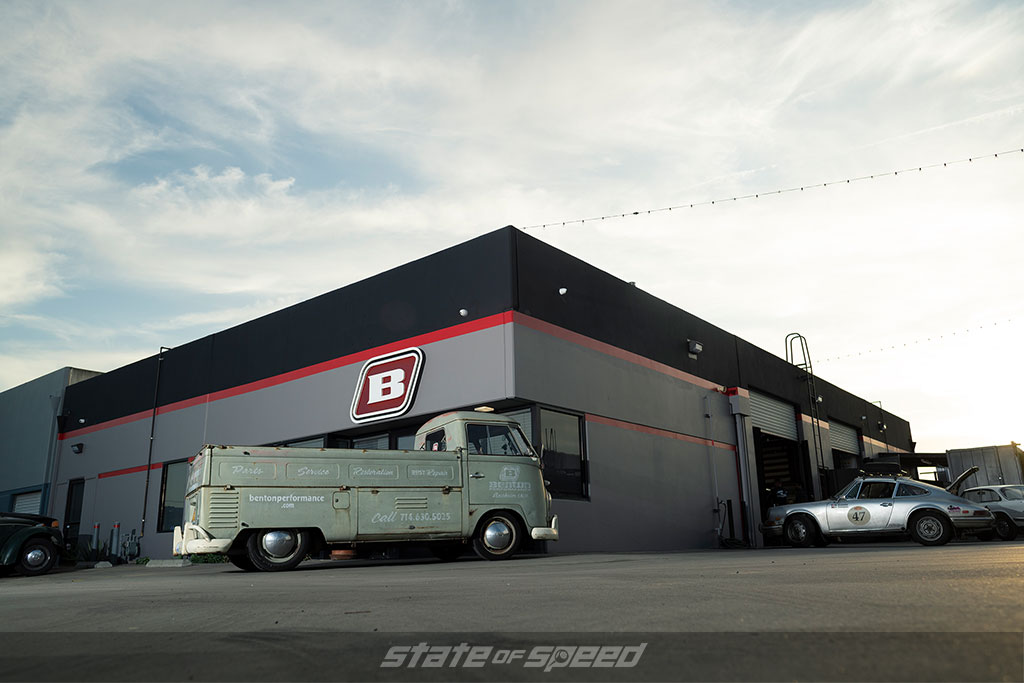 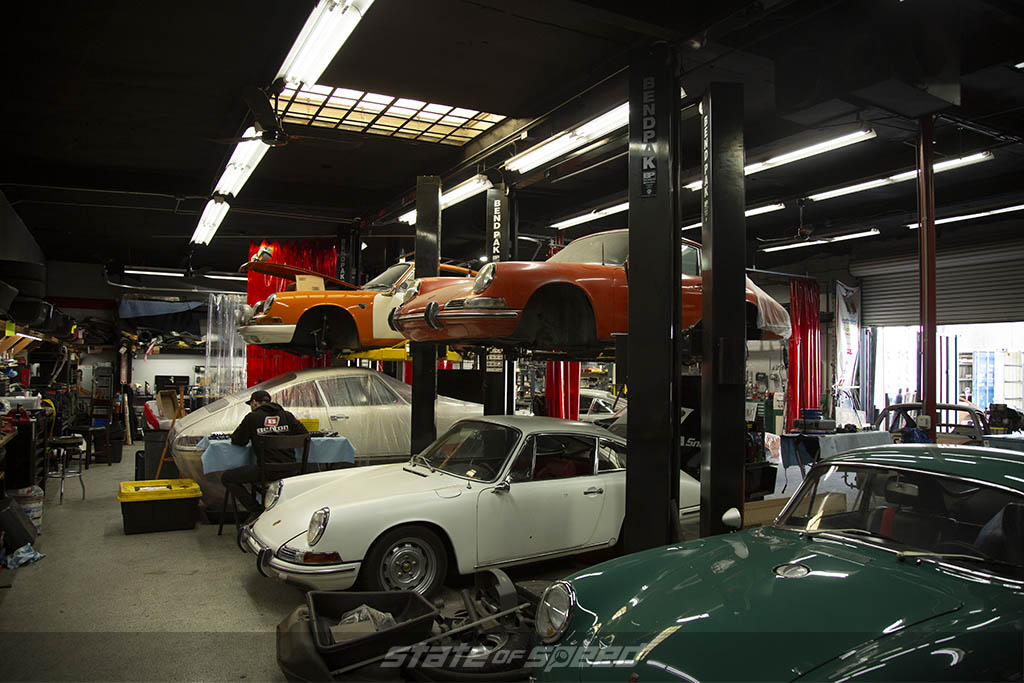 Per Benton, “This has brought us together as a family on a whole ‘nother level – it’s something we will never forget. It looked like a bomb went off, and now, although the shop is smaller than it was, it’s going to be more efficient. Everyone worked very hard on ‘smoothing the corners’ and improving the flow.” 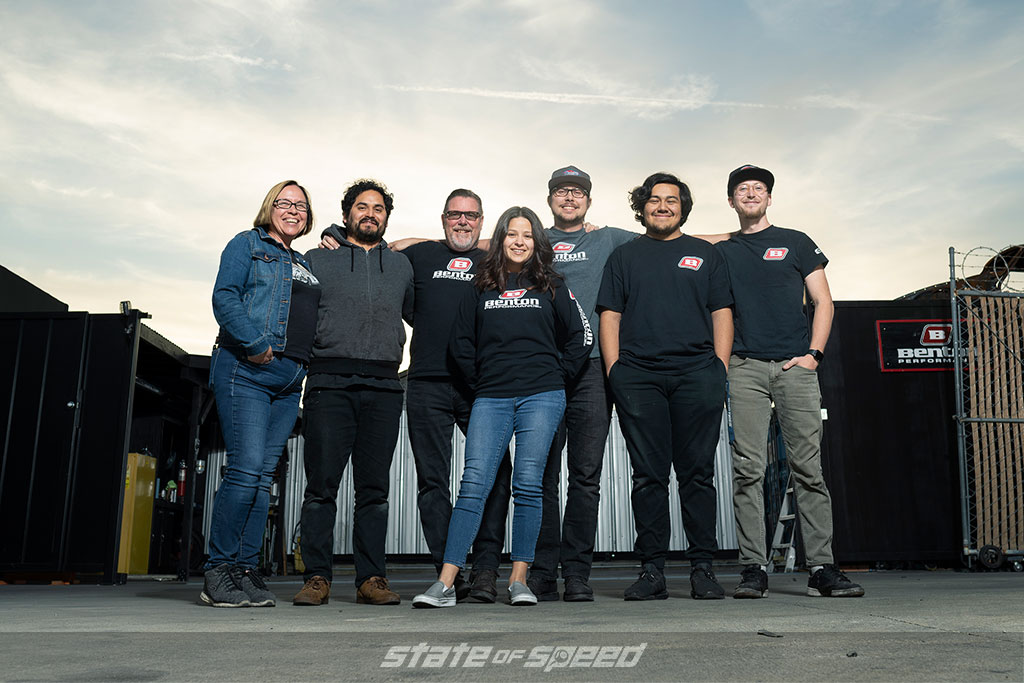 “We put in LED lighting. We fixed the AC in the back unit so there’s better air circulation back there. We took all the stuff we used for cleaning parts and moved it outside. We moved all the machine shop stuff inside, and made a compact and efficient area for machining and welding. 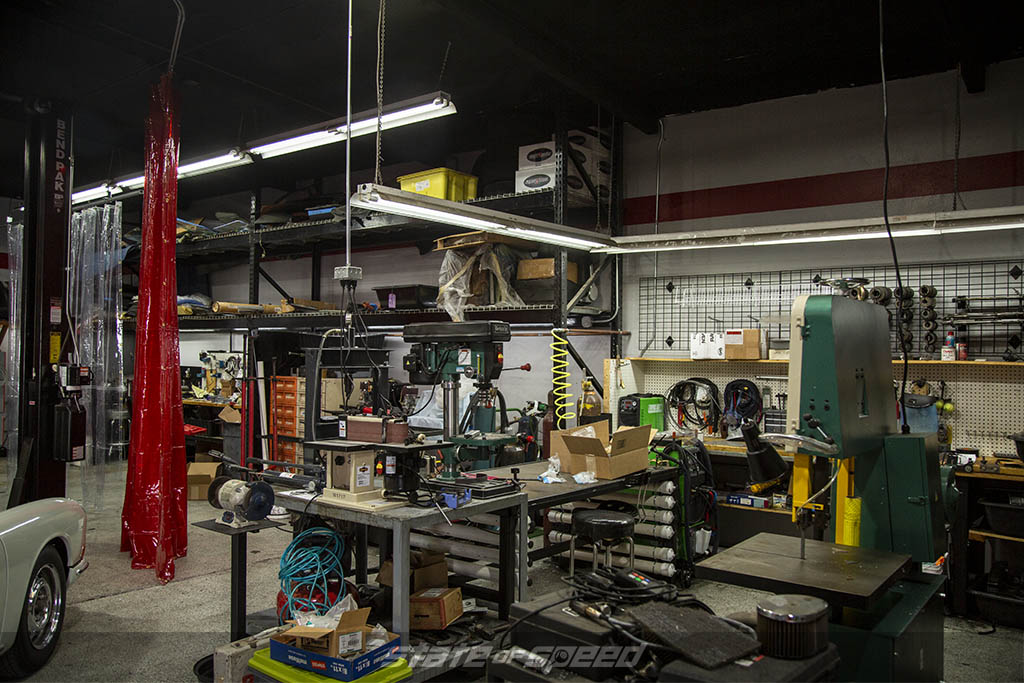 We moved carburetor and distributor repair to right outside the clean room where we build engines. We looked at the flow, and made sure it was what we wanted. We had limited space, so we built integrated custom shelving into the containers for parts storage to maximize that space. But the favorite thing I did was hang a disco ball above bay 1 with four spotlights on it, because when I flip that switch on, it makes me smile.” 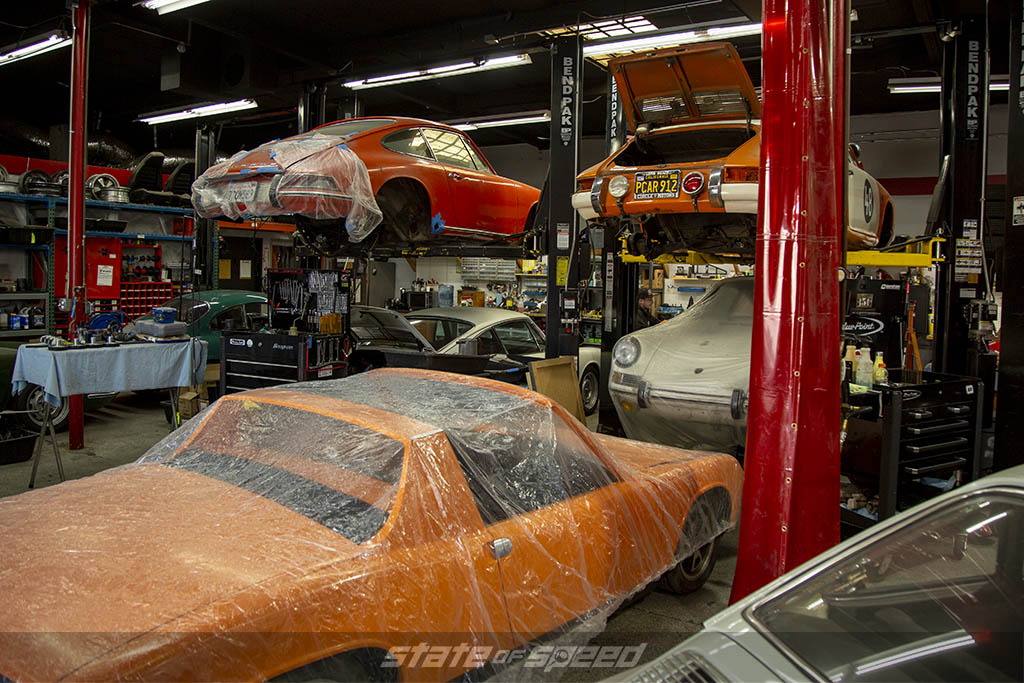 “You have to find solutions, and not focus on what you don’t have. Learning that cost me so much time, money, and whiskey, you don’t even know. It was one of those things where I was thinking about all we had to do and I wasn’t sleeping well, and I was on Amazon buying exterior lighting, and as I am browsing, ‘disco ball’ comes up in the suggestions, and I thought, ‘yeah, I think I will have that.’” Benton explains. “Now I have a 12 inch disco ball – who doesn’t want one of those? So when we ‘officially’ reopen on the 28th, we are going to have a party. 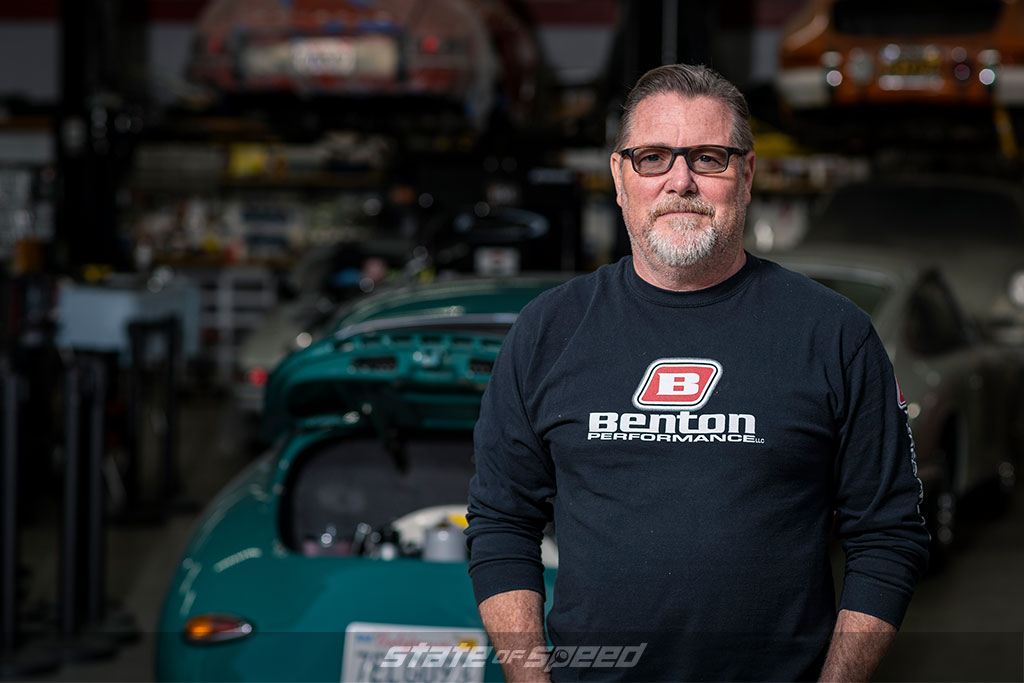