The Origin of Troy Lee Designs

No offense meant but I doubt many of you do but for those who know their hot rod history you might recognize the name Marvin Lee. Lee worked for the famous Bohman & Schwartz coachbuilders in Pasadena and at D’Arcy Coachworks in nearby Alhambra. Lee gained some notoriety with his radically customized ’42 Chevy Fleetline, however, he got the public’s attention when his beautiful silver painted dry lakes racing ’29 Ford Roadster caught fire at a lakes meet and burned to the ground—nobody had a fire extinguisher. 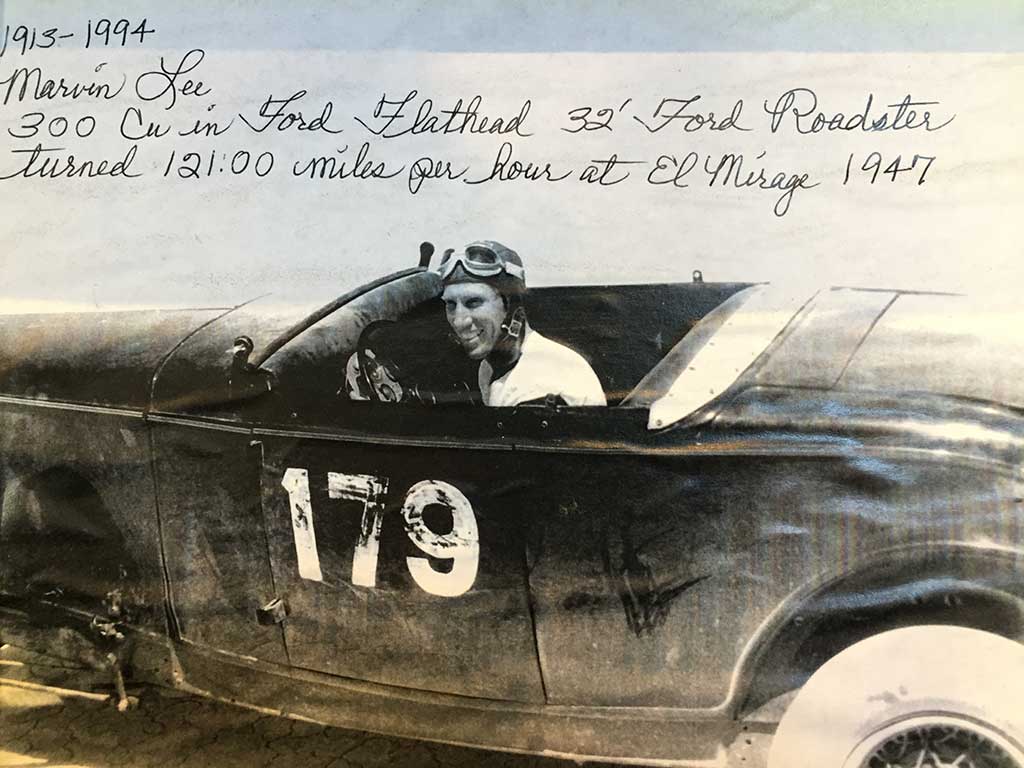 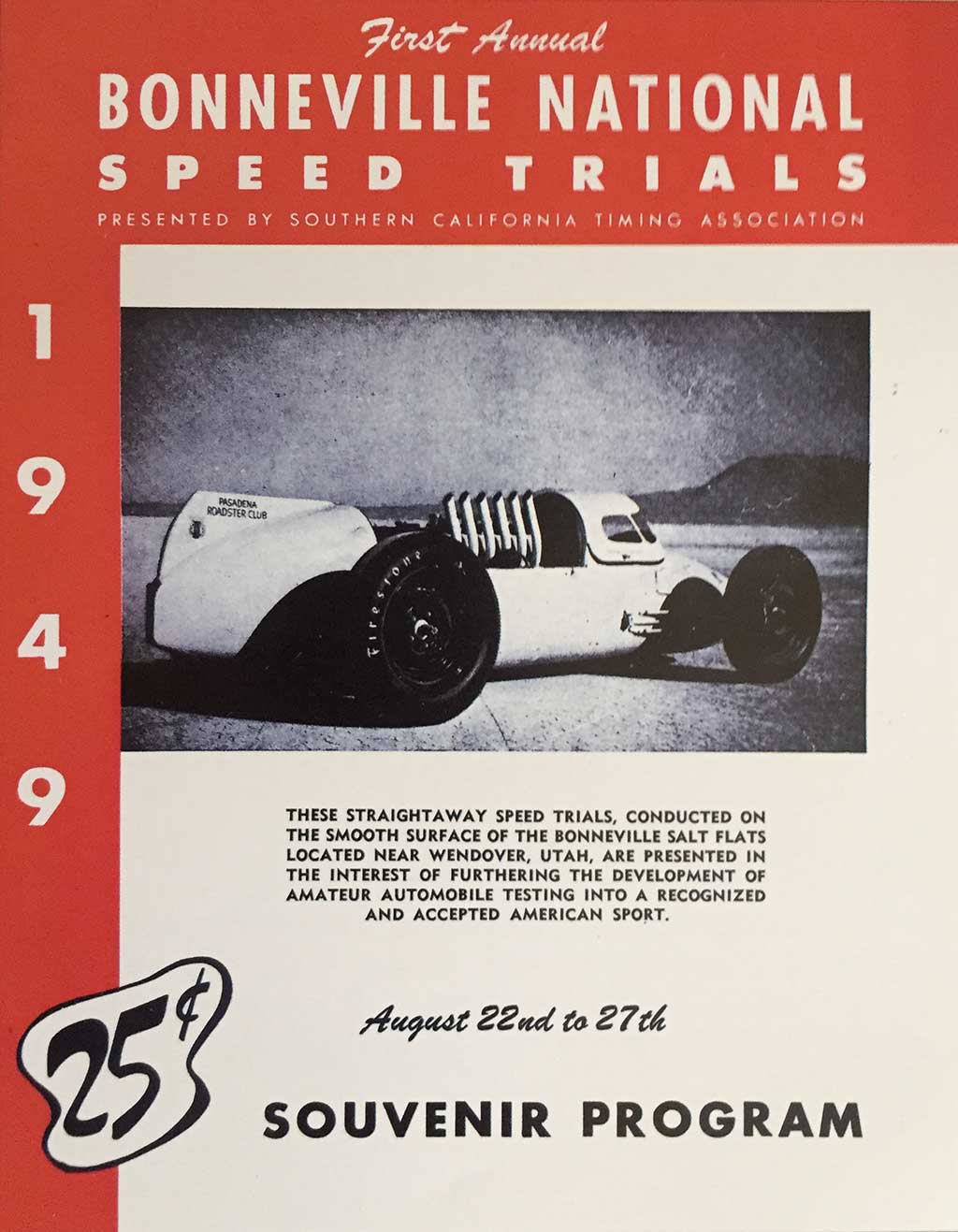 Bright yellow, the car was good enough to grace the cover of the very first Bonneville Nationals program in 1949. Lee was on the planning board for that very first Bonneville Nationals. Unfortunately, in August 1950, on a record run at Bonneville with a new body configuration, the rear wheels lost traction at an estimated 230, the car spun and flipped. Driver ‘Puffy’ Puffer was unharmed but the car was destroyed and Lee gave up on streamliners. In the mid-fifties, he opened a car lot at 1650 E. Colorado Boulevard, Pasadena where among other vehicles he sold hot rods and custom cars.

…his beautiful silver painted dry lakes racing ’29 Ford Roadster caught fire at a lakes meet and burned to the ground—nobody had a fire extinguisher.

Fast forward thirty years and you might recognize the name Troy Lee, Marvin’s grandson and the son of Larry and Linda. Larry was an artist, painter, pinstriper and motorcycle racer. With that family history you could say Troy was destined for a life in motorsports. But it was not to be an easy life; the Lees were itinerant, sometimes living in a ¾ camper and traveling from place to place.

We spoke to Le Mans winner Jim Busby at his race shop in Laguna Beach. Busby used to hang out at the Pasa Green Body Shop in Pasadena where Larry was working at the time striping and painting names on people’s cars. Busby was the paint prep kid who remembers: “People forget that Larry was a Von Dutch; he was every bit as talented as Dutch, Dean Jeffries and all that crowd. Larry Lee was right there and twice as crazy as all of them put together.”

“Larry lived in a trailer that he pulled around behind his camper and that trailer arrived here on this property where we sit today about 1976. Larry was always looking for a place to hook his hose up to and this turned out to be it. Then he built a little platform back there to paint and the very first helmet Troy painted was my helmet. It was black but when I went to England to drive a Lola for Barclay’s Bank they wanted an American flag so Larry and his infant son Troy painted that helmet with that waving American flag and that’s how Troy got started.”

“I’d put my name up underneath the visor but Jody told me to put my name on top where people could see it. Pretty soon there were so many helmets to paint I had to quit building pipes.”
Troy Lee, Troy Lee Deisgns

Eventually, Larry settled for a while near Nevada City, north of Sacramento, CA, where he operated a speedway track. It was there that Troy’s affinity with motorcycles blossomed. In 1979, they moved back to Southern California where Troy began to race KTMs., Suzukis and eventually Husqvanas. He was also painting racecars for Busby. When he was not painting he was welding exhaust systems for Bill’s ProCircuit Pipes In Corona. Then he moved on to Mitch Payton building pipes in Mitch’s folk’s garage in Norco. Meanwhile, he started painting helmets in his spare time for Jody Weisel of Motocross Action Magazine who put a little ad in the back of the magazine. “The first ones I painted were for Wardy (Jeff Ward) and Magoo (Danny Chandler) and Todd ‘Goat’ Brecker” Said Lee. “I’d put my name up underneath the visor but Jody told me to put my name on top where people could see it. Pretty soon there were so many helmets to paint I had to quit building pipes.”

“It was around that time I started making visors—vacuum-forming them using my mother’s oven and a vacuum cleaner.” Unable to stand the stench of melting plastic, Linda encouraged Troy to move his operation into a hanger at Corona Municipal Airport (CMA). Most airports frown on automotive operations and CMA required that he spend 40-percent of his time working on airplanes so he began painting registration numbers and even complete planes. Eventually, Troy occupied three hangers at the airport. However, a night of drinking Wild Turkey precipitated a move to a new location on a street ironically named Wild Turkey Circle in Corona.

The visor business was growing though and Lee went to Japan to get molds made. Linda, meanwhile, made him business cards and Malcolm Smith Motorsports agreed to distribute the products. Troy Lee Designs (TLD) was born and there was soon a relationship with Japanese helmet maker Shoei to develop a line of mountain bike helmets.

…a night of drinking Wild Turkey precipitated a move to a new location on a street ironically named Wild Turkey Circle in Corona.

By 1991, business had outgrown the hangers and TLD moved into a new commercial building just down the street. Although helmets remained a huge part of the business with commissions from Wayne Gardner, Dario Franchitti, Scott Dixon, Tommy Hayden, Roger Lee Hayden, Jeremy McGrath, Danica Patrick, Scott Russell Paul Tracy, Jimmy Vasser, Ryan Villopoto and many others, the product line had expanded to include action sports apparel and protective gear.

In 2001, Lee formed a supermoto team with long-time friends Jeremy McGrath and Jeff ‘Wardy’ Ward. They campaigned in the Red Bell AMA Supermoto amateur national championship with Honda support. They were very successful and Wardy placed in the top three from 2003 through 2007 and won in 2004 and 2006. Meanwhile, in 2003, Lee relocated TLD to a 22,600 sq ft historic Ganahl Lumber building in Corona where more than 85 people now work. The facility, located at 155 E Rincon Street, has a 5,000 sq ft retail showroom that houses Lee’s collection of unique sports memorabilia. It’s open Monday through Friday.

Troy Lee Designs are now sold in stores all over the world but in 2011 Lee opened his own store Troy Lee Designs Boutique and Design Center at 380 Glenneyre Street, Laguna Beach, California. The store offers premium tees, jeans, high-end clothing and a selection of TLD bicycle wear, moto gear and sportswear. The store is open seven days a week where that first helmet painted for lifelong friend Jim Busby is displayed.

In 2016, the private investment firm Spanos, Barber, Jesse & Co., invested in TLD and has helped the brand grow and expand its offerings. There is a new 40,000 sq. ft. warehouse in Upland, CA, and a new store in Whistler, British Columbia, Canada. Next year, 2020, will see Troy Lee Designs celebrate its 40th anniversary by adding a new European-based Moto-X race team with Yamaha. This is in addition to the existing Troy Lee Designs/Red Bull/KTM official factory team that continues in 2020.

As important as it is as a branding, marketing and moral building, racing is only a small part of what is now a multi-million dollar business. “Our investment in the youth continues as Derek Drake and Piece Brown come aboard our pro team.” Said Lee. “I’m so stoked to see what the future holds for 2020.”

It’s a long way from a camper but when I called Troy answered his own phone and followed up so you know the guy still has his feet on the ground and a spray gun in his hand.