One of the defining characteristics of an engine is the compression ratio, which in simple terms is a comparison between how much volume there is inside the cylinder when the piston is at its highest and lowest points (don’t get me started on Wankel rotaries – they’re basically witchcraft). Compression ratio interacts with a lot of other factors to produce power, and can be changed to some extent by selecting different components for the same basic engine during the build. To add another plot twist, the mathematically-calculated static compression of a particular combination can differ significantly from the engine’s dynamic compression in operation, thanks to sophisticated intake and exhaust design, forced induction, or even EGR (exhaust gas recirculation).

To start calculation compression ratio, you need to know an individual cylinder’s displacement. This is the area of the cylinder multiplied by the length of the crank stroke. But you’re not done yet, because you also have to know how much space there is in the cylinder head with the piston all the way up as well. The difference between the maximum volume with the piston at bottom dead center and the minimum volume at the top is the compression ratio. This is, of course, a huge over-simplification, but it will give you an idea of what a number like “9.5:1” means – there is 9.5 times more volume inside the cylinder at BDC than there is at TDC.

Designs with long crank strokes relative to their bore diameters tend to also have high compression ratios. Diesel engines, which rely on very high compression to ignite the fuel and air mixture, are a typical example. But there are other factors that have a major impact on compression ratio. The design of the cylinder head’s combustion chamber is a big player here, as the smaller volume it incorporates, the higher the CR will be. Another significant way to alter compression ratio is through piston design – a ‘dished’ piston will have lower compression than a flat one, all other things being equal, and a domed one will have higher compression. Even things like the thickness of the gasket between the head and the block and whether the valves are dished will affect compression ratio.

Though it’s possible to math most of this out with a little applied geometry (or plug the appropriate numbers into an online calculator like a lazy internet tech writer would), the volume numbers for the piston and the cylinder head have to be actually measured, if they’ve been altered in any way from how the manufacturer delivered them. A head that has been “decked” by having material removed from the surface that contacts the block will have a higher static compression than an unaltered head, and pistons can be milled to lower compression, either on purpose or as a side effect of cutting pockets for larger diameter valves. While measuring actual piston dish/dome volume is kind of a pain, doing the same for a combustion chamber is actually quite easy, only requiring a measuring device with accurate markings in cubic centimeters, a piece of clear plastic with a hole drilled in it, some tinted water, and a bit of grease to seal the valves and where the plastic covers the combustion chamber.

Now that we’re solid on what static compression ratio is, let’s take a moment to discuss why it’s important. In general terms, high compression (which is a relative term itself) is desirable because it enables more power production. Each cylinder-full of air/fuel mixture will have more room to expand and do work, making the engine more efficient. As mentioned before, diesel engines take advantage of very high compression to operate very efficiently compared to gasoline engines. But the same thing that makes diesels work in the first place – compression ignition – is also a big limiting factor for how much compression ratio a gas-powered engine will safely tolerate.

In general terms, high compression (which is a relative term itself) is desirable because it enables more power production. Each cylinder-full of air/fuel mixture will have more room to expand and do work, making the engine more efficient…

120 or so years ago at the dawn of the automobile, engines were typically very low-compression compared to modern designs. The Ford Model T had a 2.9 liter inline four cylinder engine that produced a whopping 20 horsepower with a compression ratio of just 3.98 to 1. While the power output wasn’t all that thrilling, the low compression was a necessity during that time period when fuel was of uncertain quality and highly variable octane rating (we’ll get to more on that in just a minute).

As oil companies began to create standards for pump gas, compression rose to take advantage of better fuel, and the Second World War really turned up the wick on engine design. Because of ‘high test’ fuel, naturally aspirated engines for trucks, tanks, and especially aircraft became lighter and more powerful, and turbo and supercharged engines were finally practical. Even so, after the war when the first small block Chevy V8 engines were introduced in 1955, they ran compression ratios as low as 8.2:1 for durability.

The limiting factor on how much compression an engine can run is the knock-resistance of the fuel, commonly referred to as the octane rating. It gets its name based on a comparison of how hard it is to ignite relative to pure octane, a specific hydrocarbon fuel – gasoline rated at 93 octane in a particular test is easier, while 100 is comparable and 110 is more difficult. You’ll sometimes hear people say that what happens inside a cylinder is an “explosion” but if that’s what is happening, something has gone terribly wrong. It’s actually a ‘deflagration’ – rapid, but controlled burning. When fuel is compressed too much, it will spontaneously ignite and lead to preignition, detonation, or simply knock. Whatever you call it, it has the potential to very quickly melt spark plug electrodes, burn holes in piston tops, break the ring lands off the sides of the piston, and push out head gaskets. None of these are desirable outcomes

The limiting factor on how much compression an engine can run is the knock-resistance of the fuel, commonly referred to as the octane rating…

It’s possible to compensate to a degree for lower-octane fuel by running less ignition timing, but that’s a compromise at best. Because it takes a non-zero amount of time for an engine to completely burn a cylinder of fuel, all but the lowest-RPM designs incorporate some amount of ignition advance, firing the spark plug before the piston reaches top dead center on the compression stroke. As the flame front moves away from the spark plug towards the edges of the combustion chamber, it compresses the remaining unburned fuel and air, and if it squeezes it too hard, it can spontaneously and nearly instantly ignite instead of a smooth burn. This is one example of the dynamic compression we mentioned earlier.

Every engine has an ignition timing “sweet spot” that produces the best power when it is fed fuel with sufficient knock resistance, but it can run successfully, though with lower performance, if the ignition timing is retarded to later in the compression stroke to keep peak pressure in the cylinder below the knock threshold. You’ll often see modern vehicles with manuals that advise “Premium fuel preferred – 87 octane minimum” because they have sensors that listen for knock and pull out timing if they’re fed Regular instead of Premium. They’ll make more power on high octane fuel not because the gas is more powerful, but because they can operate at their designed ignition timing settings.

Another source of increased dynamic compression comes from an engine’s volumetric efficiency, which is a way of expressing how completely the cylinder fills with a fresh charge of air and fuel on the intake stroke. A 500cc single cylinder engine that ingests exactly 500 cubic centimeters of air per cycle is running at 100% VE, for example. Now, if you were raised to respect the laws of thermodynamics, you’re probably saying, “no mechanical system is 100 percent efficient!” and you are absolutely right, but there’s an interesting caveat. While the restrictions posed by the intake tract do indeed cause naturally-aspirated engines to normally operate below 100% VE, very clever engineering can allow an all-motor design to achieve over 100 percent under certain specific operating conditions.

This is possible because air, while not being very dense, does have mass, and moving mass has inertia. Careful design of the intake and exhaust manifolds, combined with specific valve timing, can take advantage of positive and negative pressure pulses reflected through the system in a narrow RPM range to ‘internally supercharge’ the engine and push VE over 100%. Though this was once confined to racing powerplants, increasingly sophisticated factory designs with variable valve timing and lift and variable intake geometry have made this effect worthwhile for mass production. 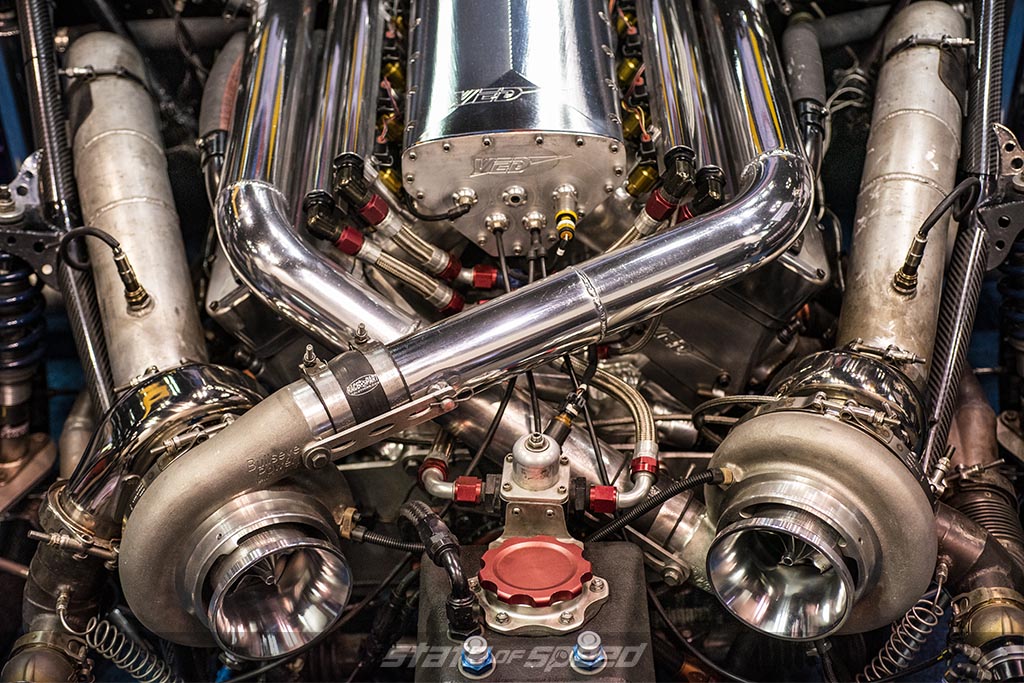 The net result of pushing VE over 100 percent is that the total compression ratio the engine experiences can be higher than the calculated static CR. Taken to the extreme, adding boost in the form of turbocharging or supercharging throws even more dynamic compression into the mix. Careful tradeoffs have to be made with forced induction engines to balance out the effect of boost with reduced static compression in order to keep detonation at bay – the efficiency lost by running lower compression ratios is more than offset by the increased power offered by intake pressurization.

Modern engine designs have seen compression ratio increased across the board, even for factory forced induction, and this is largely thanks to a much better understanding of what happens inside the combustion chamber during a power stroke. One look at a current engine’s piston and combustion chamber design will show you just how far technology has come from the days when the two-valve hemi head, with its combustion space shaped like half an orange peel, was the state of the art. Features like ‘squish bands,’ swirl-inducing peaks and valleys, and stratified charge strategies allow today’s engines to run compression ratios that would make those of just 20 years ago go ‘pop’ on the very same fuel. By figuring out what it takes to create a margin of safety for the knock threshold but still increase compression ratio, engineers continue to squeeze (pun intended) more and more out of every cubic inch of displacement.