So, you know how there are people who are so busy to the point where they’re difficult to reach online but, if you’re able to meet with them, are actually quite settled in person and are able to give you their full and undivided attention? Yeah, that’s not Dave Carapetyan of Rally Ready Driving School.

When I first arrived at the 137-acre ranch in Dale, Texas, Carapetyan was already on his porch with his five dogs and the guys from Global Time Attack discussing how he could help them make their first event at Circuit Of The Americas a successful one. It’s funny because, when we initially chatted on Facebook, I thought that his rapid-fast way of conversing was a result of him killing it in Mario Teaches Typing as a kid. After only a few minutes of sitting back and watching the meeting, it was clear that that wasn’t the case. He just doesn’t stop.

I decided I didn’t want to waste time asking him about what ultimately led him to found Rally Ready Driving School. Instead, I listened to the Do It For A Living podcast that he was a guest on recently. From this, I learned that he’s essentially lived in Austin all of his life and, as a teenager, was in a punk rock band. It was only after his band members introduced him to Gran Turismo 3 that he became hooked on rallying.

Between the band’s introduction, a near-death experience with a cattle trailer, and a whole lot of growing up in between, Carapetyan decided to start Rally Ready back in 2010. With nearly a decade of existence in the books and having already taught some of his most famous students including Daniel Ricciardo, Bucky Lasek, and Aaron Kaufman (who you’ve likely seen most recently in Gymkhana Ten), Dave has created one of the most successful rally schools in the Midwest, if not the country.

But it wasn’t until 2014, when the X-Games came to Austin, that Carapetyan took Rally Ready to the next level. After networking at the games, Dave ended up meeting someone there who decided to help him buy the 137-acre ranch that both he and his school reside on currently. By 2014, Dave already had a fleet of about 25 cars and had taught a few classes, so having the business living on a dedicated space was really the next big step.

Pavement turned to gravel as I putted along on the 40-minute drive. As I drove along, I not-surprisingly observed that, compared to Austin, Dale was pretty desolate. My immediate surroundings were draped with a strange, golden hue as each house passed me by. In what seemed like an instant, I was at the Rally Ready ranch.

Making my way into what was the equivalent of the “Parking Lot,” I proudly parked my functioning Mazda Miata rental next to a bare, stripped out Lancer chassis. I initially thought that my rental was the only functioning vehicle in the immediate vicinity until I saw six-car fleet parked a short distance away. 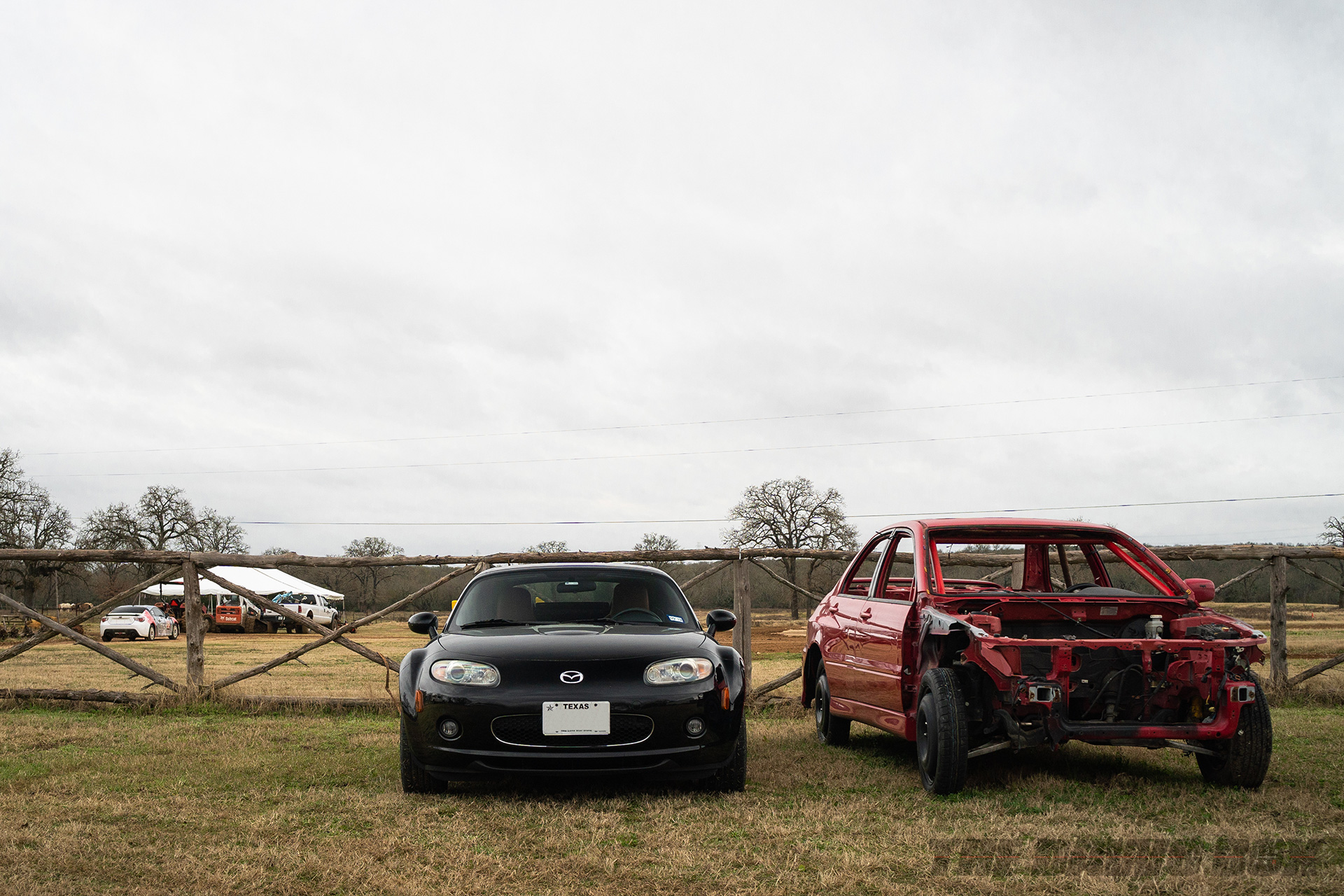 Just beyond the functioning fleet sat a gated-off area filled with even more cars, or to people like us: A field of potential. Not so inconspicuously placed within what Dave would call the junkyard sat his Pike’s Peak-winning Evo (one of the many projects he says he might get back on the road…someday). After ogling over that car for far too long, I continued towards the house where I saw even more goodies, like the Rally Ready Subaru BRZ. By the house sat a few Yamaha and Textron UTVs, which Dave will claim, until he’s blue in the face, are the future of rallying.

Dave has a great sense of humor because, when people like Ricciardo or I say that he’s living every car nut’s dream, he quickly retorts, “Ehh, all I own is a bunch of stupid race cars. It’s not that glamorous.” Not true man! Not true.

Although there weren’t any classes going on while I was there, the track had just been used to film a commercial for COBB Tuning. But having said that, it was nice to walk around and photograph a “cold” track for once. The silence in the air and vastness of land really contrasted with Dave’s seemingly-manic life. And, although we weren’t able to rip through the woods, I could really get a sense of just how much fun you could have spending a day in one of his classes.

Dave Carapetyan is equally as fascinating as he is busy. I only spent a few hours at Rally Ready Driving School, but I learned so much about him, the sport of rallying, business, and life in general. He’s flying by the seat of his pants, and I already know that he wouldn’t have it any other way.

“I didn’t go to college, I went to rally,” Carapetyan joked on Do It For A Living. One of the many keys to success for Dave was learning as he went and not being afraid to fail. As cliché as that sounds, it’s helped keep Rally Ready alive and growing to this day. “A lot of us in this industry have this fear of failure,” he explained on the podcast. “The thing that helped me most was realizing that I already made it…according to my metrics, I’ve already succeeded.”

That’s not to say that he’s complacent by any means. Quite the opposite. Dave has one and five-year plans for Rally Ready, which include UTV driving classes and, what he calls, the “Ultimate Driver’s Ed Experience,” where he hopes to provide first-time drivers with a more in-depth education. All this coming from the man who never went to business school and jokes that his business plan changes “just about every 45 minutes.”

Oh, and that’s the other interesting thing about Dave: When it comes to his business, Dave doesn’t keep secrets. He’s more than happy to divulge anything and everything he’s working on. Why? Because, in his mind, no one can replicate what he’s doing.

What initially sounds like an overly confident, bold claim is, in reality, a true testament to how much Carapetyan cares about the future of both rallying and motorsports as a whole. In an industry that’s primarily driven by ego (which, by the way, he argues also has its benefits in motorsports), Dave is happy to, not only share his business strategy with anyone but also, to help anyone in any way that progresses motorsport. To him, it’s crazy to think that other driving schools across the country are his competition. Carapetyan explained to me that he’d much rather join forces with other schools to not only refer business to one another but also to unite and grow motorsports as a whole.