Your First Dragstrip Pass: Know Before You Go

Essential Information for Graduating from the Bleachers to the Burnout Box

Drag Racing is the most American form of motorsports, and is the one form of competition where almost anyone can participate. It’s “racing that you do,” not just “racing that you watch.” Maybe you’ve been to a couple of events at your local track, or maybe you live your life a quarter mile at a time on the street – here’s the essentials you need to know before you make your first dragstrip pass.

Most dragstrips try their best to keep “grudge night” and “test and tune” entry fees low. In most places, $25-$50 will get you as many passes down the dragstrip as you care to make during normal weekly racing. You might have to pay a little bit more for entry into events where there is an elimination ladder and prizes at stake, but if you just want to drive your car flat-out on the track, it will cost you less than dinner at a nice restaurant. 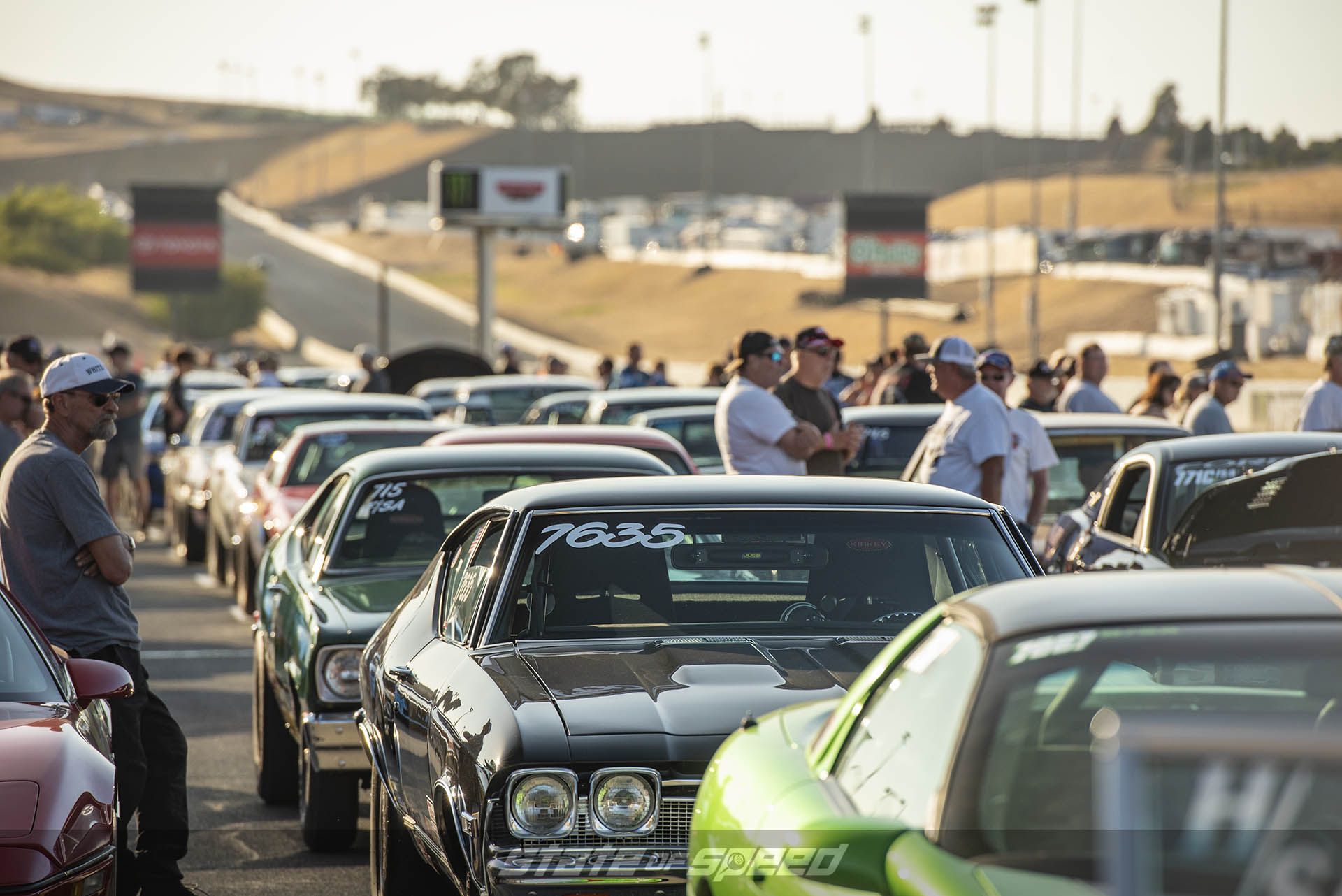 “But street racing is free!” you might say – well, while it doesn’t cost you anything up-front, there’s always the chance of thousands of dollars in tickets and court costs if you get busted, not to mention the fact that you aren’t getting an ambulance, safety safari, and EMTs on standby in case something goes wrong. You also aren’t getting the assurance that the guy lined up next to you isn’t driving some dangerous piece of junk either. Which brings us to… 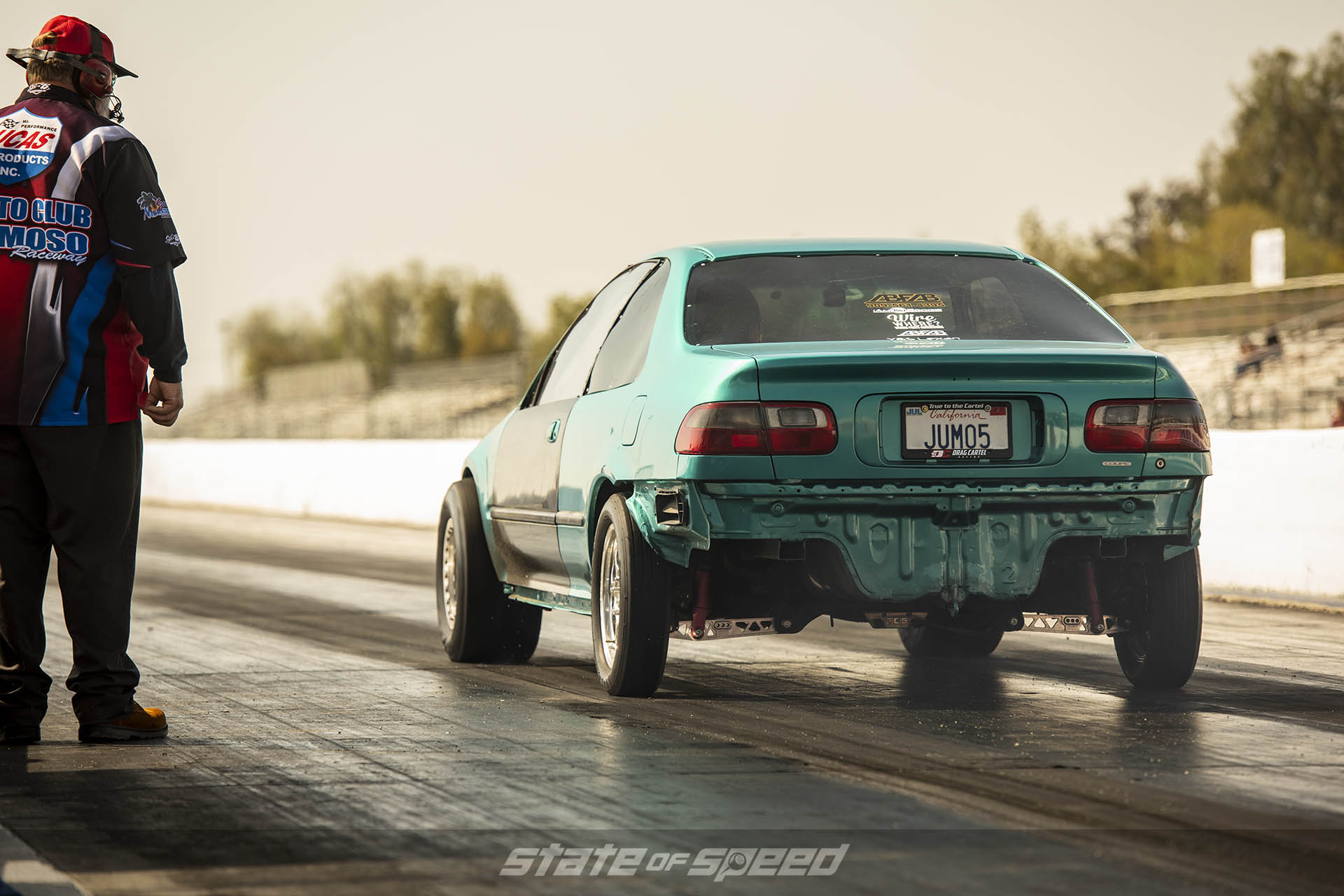 Tech inspection, the process where your car is looked over by a track staffer to make sure it meets the minimum standards to race, might seem a bit intimidating. But in reality, unless you have a highly modified car, it’s going to come down to a few simple checklist items which are all just common sense. Is your car leaking anything? That’s going to be dangerous for you, and for anyone behind you, so it will definitely send you back for a refund on your tech card. Are you missing lug nuts? Trust me, telling the tech guy “You let Hondas run with four per wheel” will not convince him to let you race your five-lug Mustang down the track with a couple of sheared-off lugs. Do you have a proper battery tie down? Electrical fires are no fun, and a shoelace or a couple of zip ties aren’t going to cut it, even on the street. 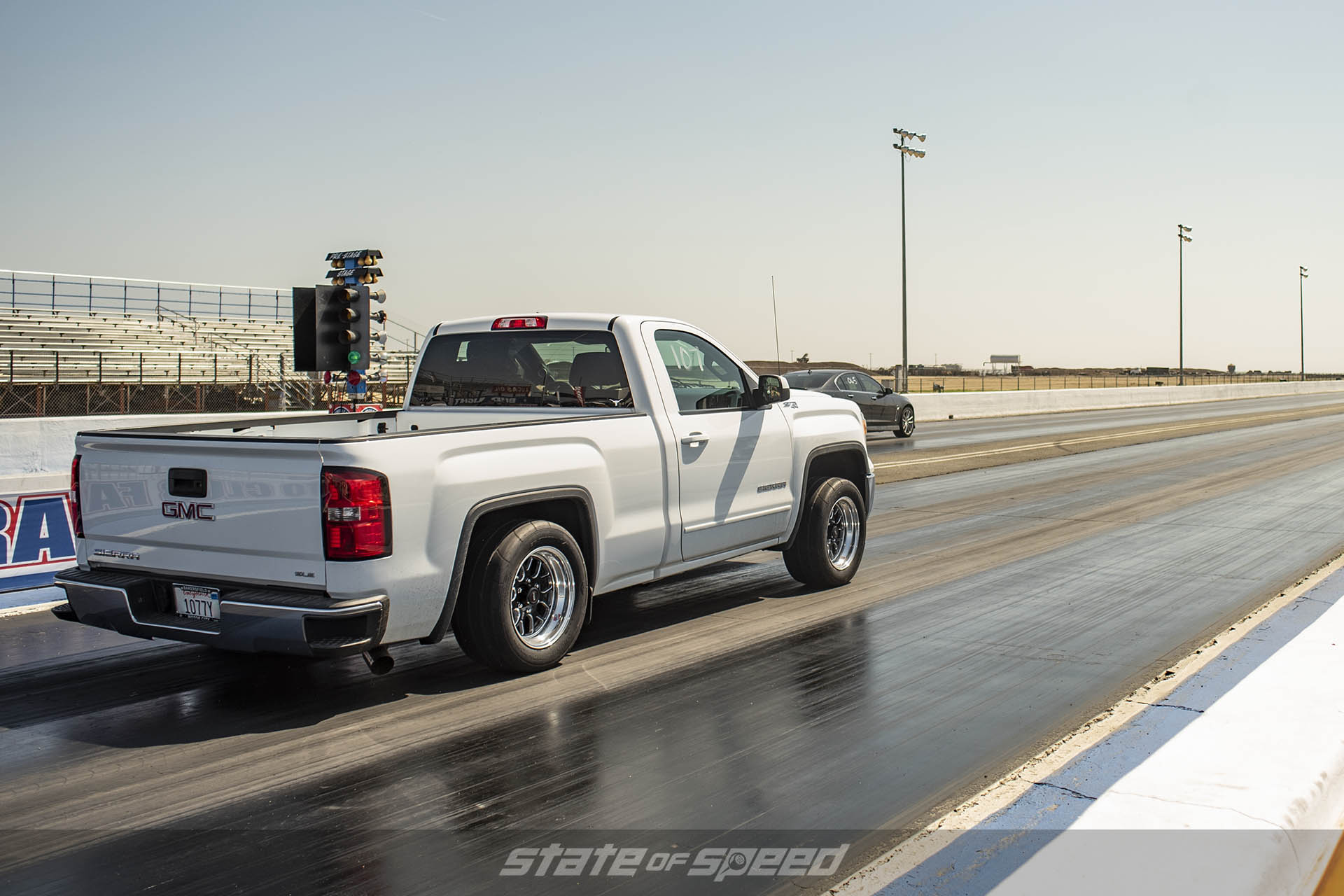 “Get the trash, recyclables, crown-shaped air freshener, and basically anything you wouldn’t want hitting you in the junk out of there.”

Once you get inside the car, you’ll need working factory seatbelts at a minimum, but one of the most common ways to waste everybody’s time in the tech line is to roll up with a bunch of loose stuff rattling around in the passenger compartment, just waiting to hit you the moment you have to brake hard. Get the trash, recyclables, crown-shaped air freshener, and basically anything you wouldn’t want hitting you in the junk out of there.

For you nitrous enthusiasts, there are a couple of special considerations. First, the tank has to be properly secured to the body/frame of the vehicle, so that in the event of a crash it won’t become a projectile. Just pinning it in the back seat footwell by pushing the seat all the way back isn’t good enough, nor is bolting it to a loose piece of plywood and hoping for the best (both things I have actually seen people try before, by the way). Second, any time a nitrous tank is sharing space with your fragile human body, it needs what’s known as a “blow-down tube” that connects to the pressure relief valve and is designed to safely route the gas outside the body of the vehicle in the event the burst disc ruptures. If you have your bottle in a separate trunk, you don’t need a blowdown tube per the rulebook, but it’s still a very, very good idea. 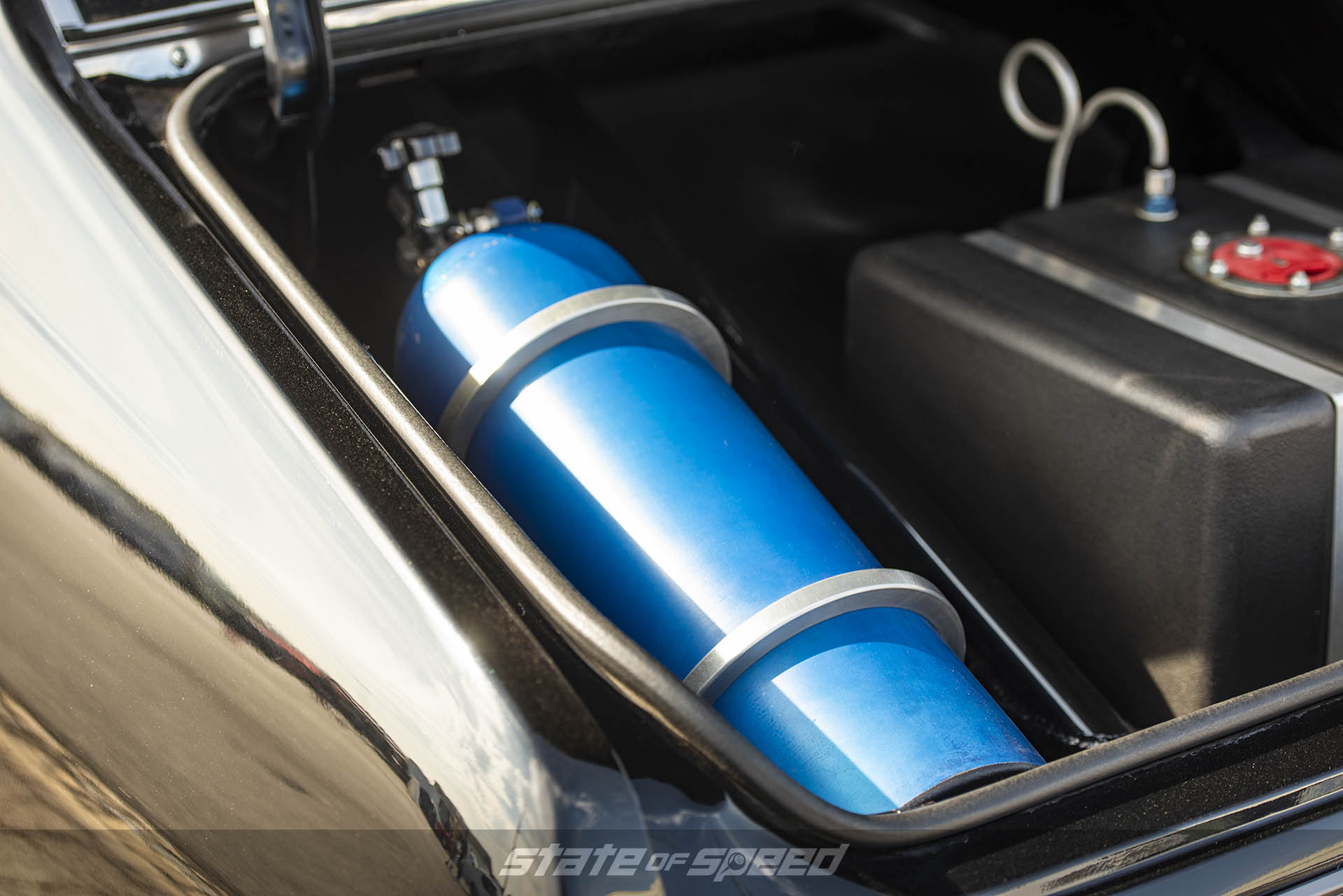 For most street-driven cars, there isn’t a lot of special “safety equipment” you’ll need, but there are a couple things that often trip up new racers. Technically, most sanctioning bodies don’t require helmets on cars slower than a certain elapsed time cutoff, but many tracks have gone to a “helmets for everyone” policy to make it easier for the staff and safer for everyone. To get started, you don’t need anything fancy, but some helmets that are technically legal for use while riding motorcycles on the street aren’t considered sufficient for drag race use. At a minimum, you’ll want an open-face helmet with a SFI or Snell rating sticker that’s no more than 10 years old – no DOT beanies, weird chrome plated WWII biker helmets, skate lids, or the like. Many tracks have a few loaners on hand that you can borrow, but it’s best not to depend on it, and let’s face it – other people’s heads have been in there, and other people are often gross. 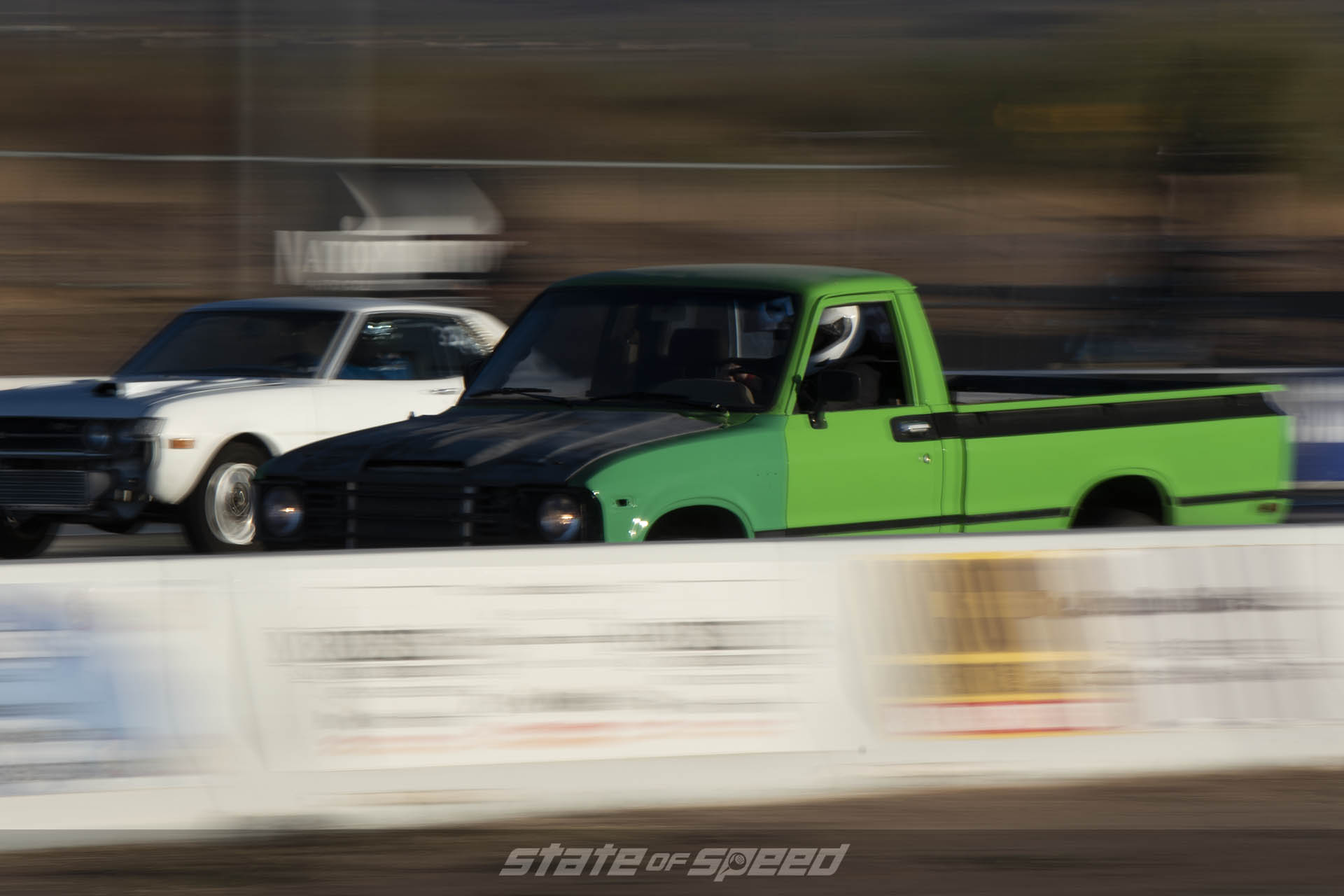 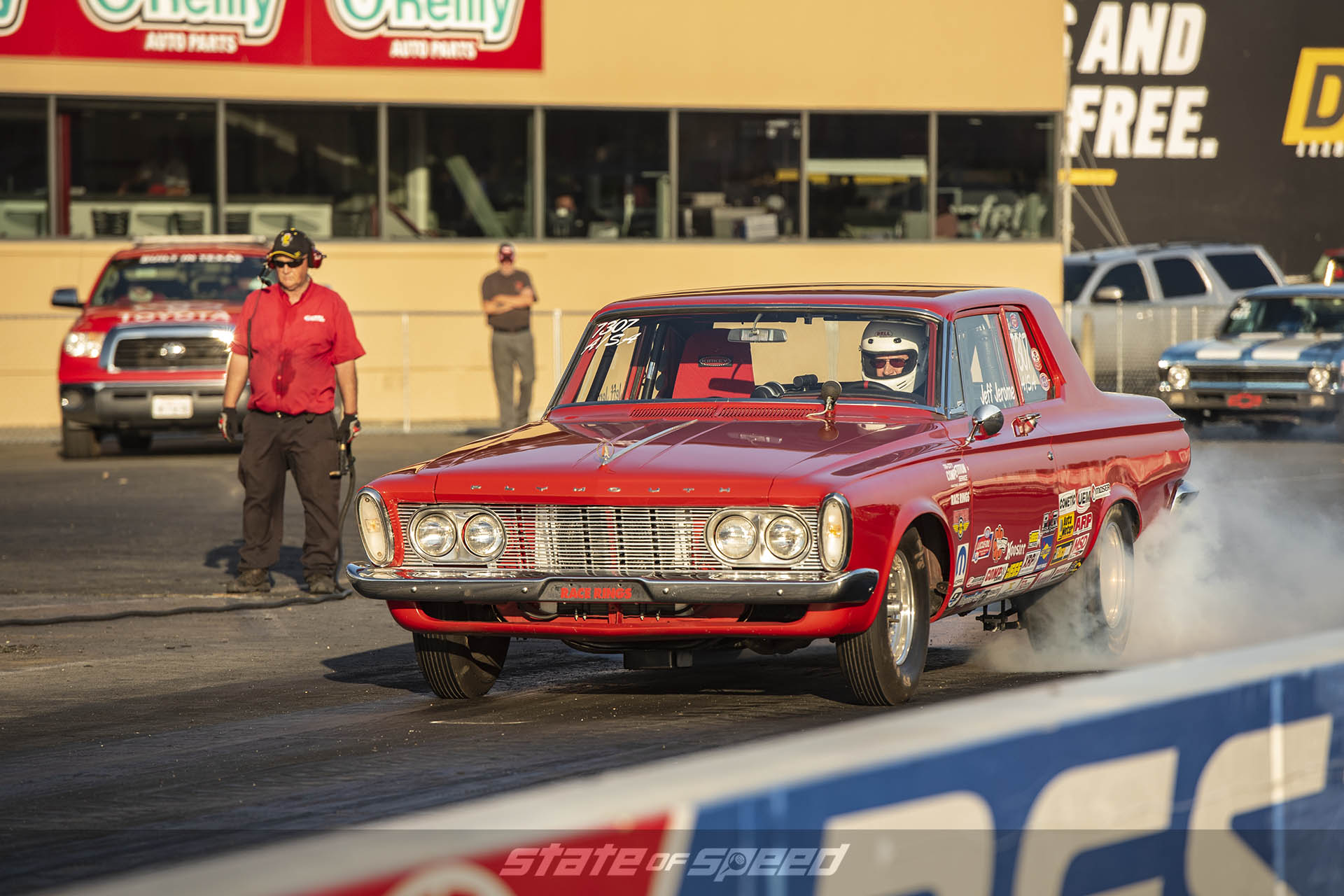 “Don’t try to go down the track looking like the love child of The Dude and Freddy Mercury in your mesh tank top and flip-flops.”

The second piece of gear you will absolutely need is long pants. This can literally be almost anything that covers your legs all the way down to your ankles, from sweatpants to jeans. It just can’t be shorts, and if you try to sneak around this rule because it’s too hot to sit in the lanes with long pants on, I can guarantee the person working the starting lanes will look inside and notice. You don’t need a long-sleeve shirt, but tank tops are also right out, as well as open-toe shoes. Don’t try to go down the track looking like the love child of The Dude and Freddy Mercury in your mesh tank top and flip-flops.

Pay Attention To The Track Staff, And Learn Basic Etiquette

Nobody is born knowing how things work at the dragstrip, and a good track staff will be happy to answer a first-timer’s questions to make your inaugural racing experience a positive one. Even if you’ve been a spectator before, there are still some things that might not be obvious if you’ve never raced. 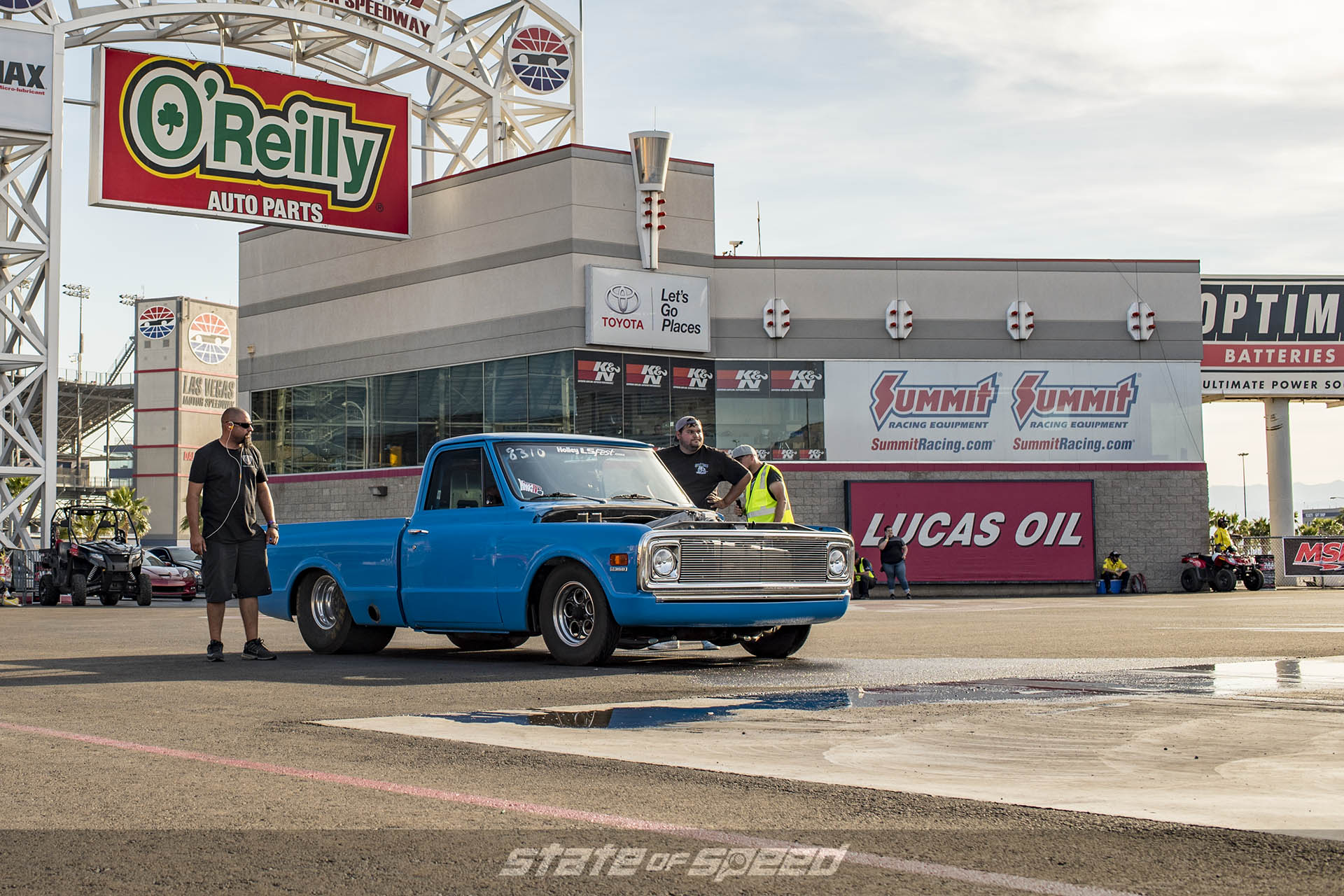 First, if you are on street tires (not drag radials or slicks), don’t drive through the water box when the person running it motions you forward. You will drag a bunch of water and bits of rubber up to the starting line with you if you do, and everyone who IS on drag radials or slicks in the staging lanes behind you will silently judge you. Drive around it to the outside of the track. For that matter, don’t try to do a long, smoky burnout halfway down the track like you’re John Force – this is pointless on street tires, as they will develop less traction when they’re overheated, you’ll tear up the rubber laid down on the track, and usually if you go past the start beam during your burnout, you won’t be allowed to make a run anyway. A short “dry hop” to clean the tread of any debris before rolling up to the line is more than sufficient for street tires. 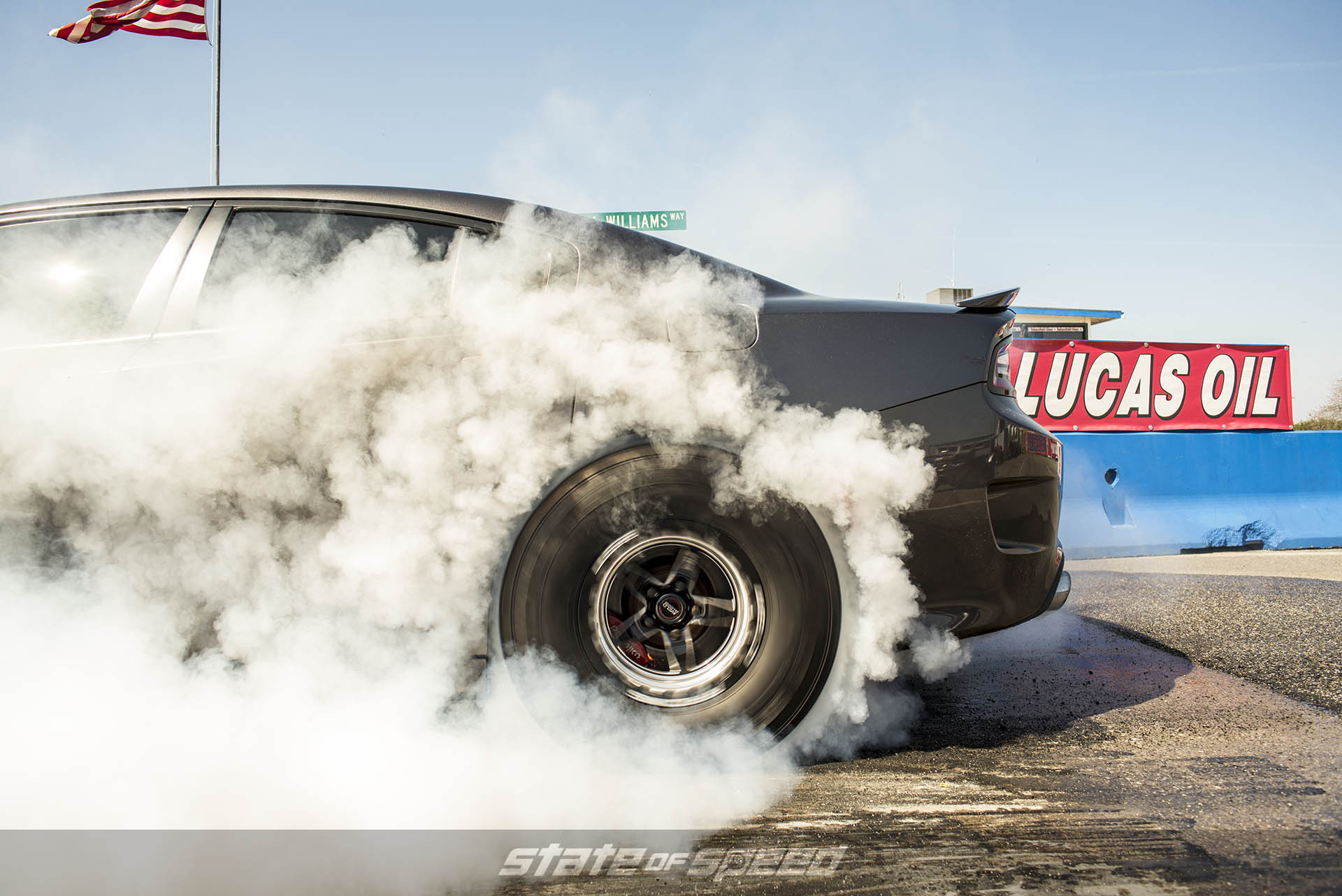 Once the starter motions you forward, edge forward carefully until your prestage beam lights. Check where your opponent is, then move the rest of the way to fully stage once they are also ready in the prestage beam. Don’t be the noob who didn’t pay attention to where the photocells are, who either drives right through the beams and tries to stage on the back tire, or worse yet, drives all the way up right next to the tree. The starter will have to walk all the way out there to talk to you and get you to back up, and that’s not fun for anyone. 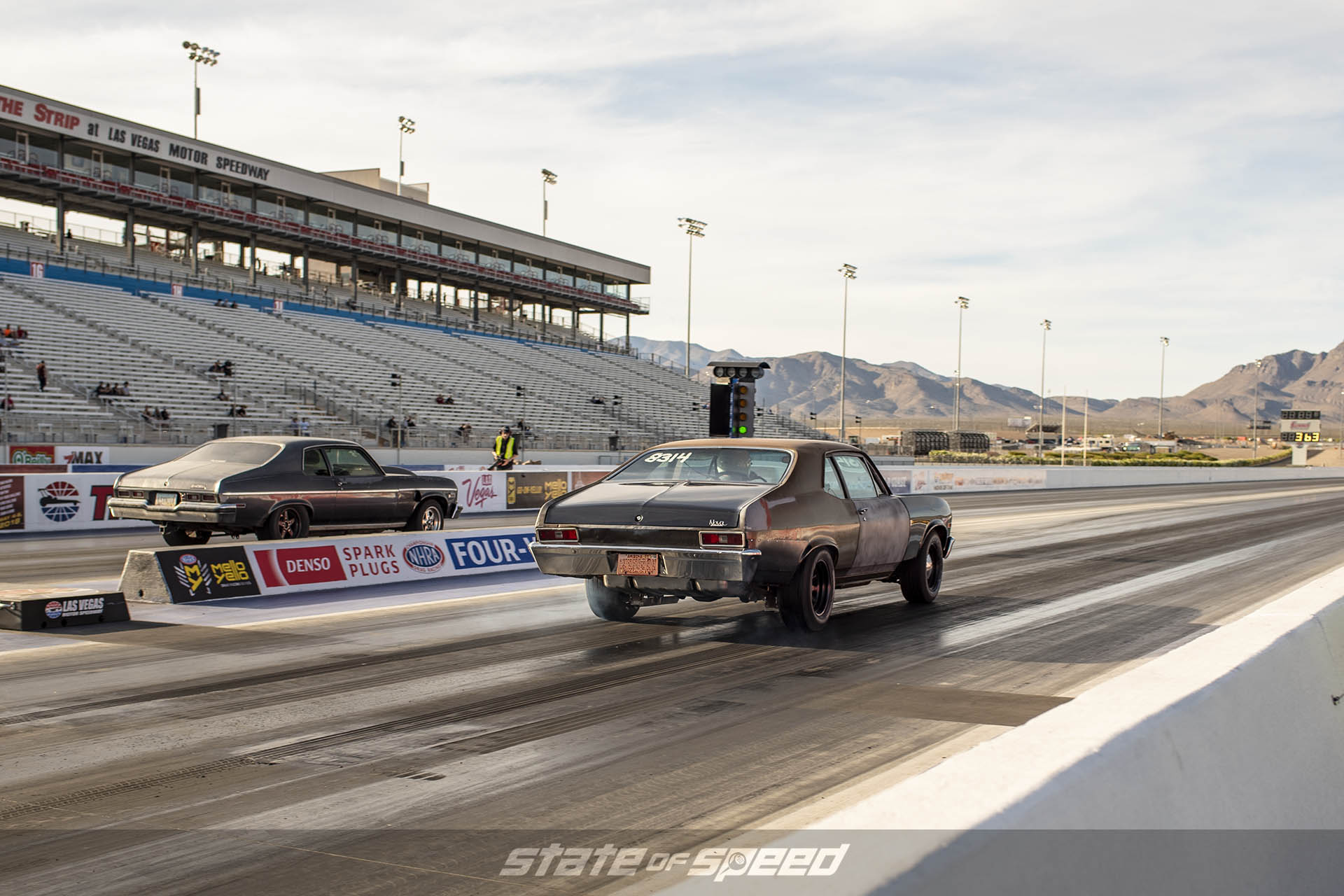 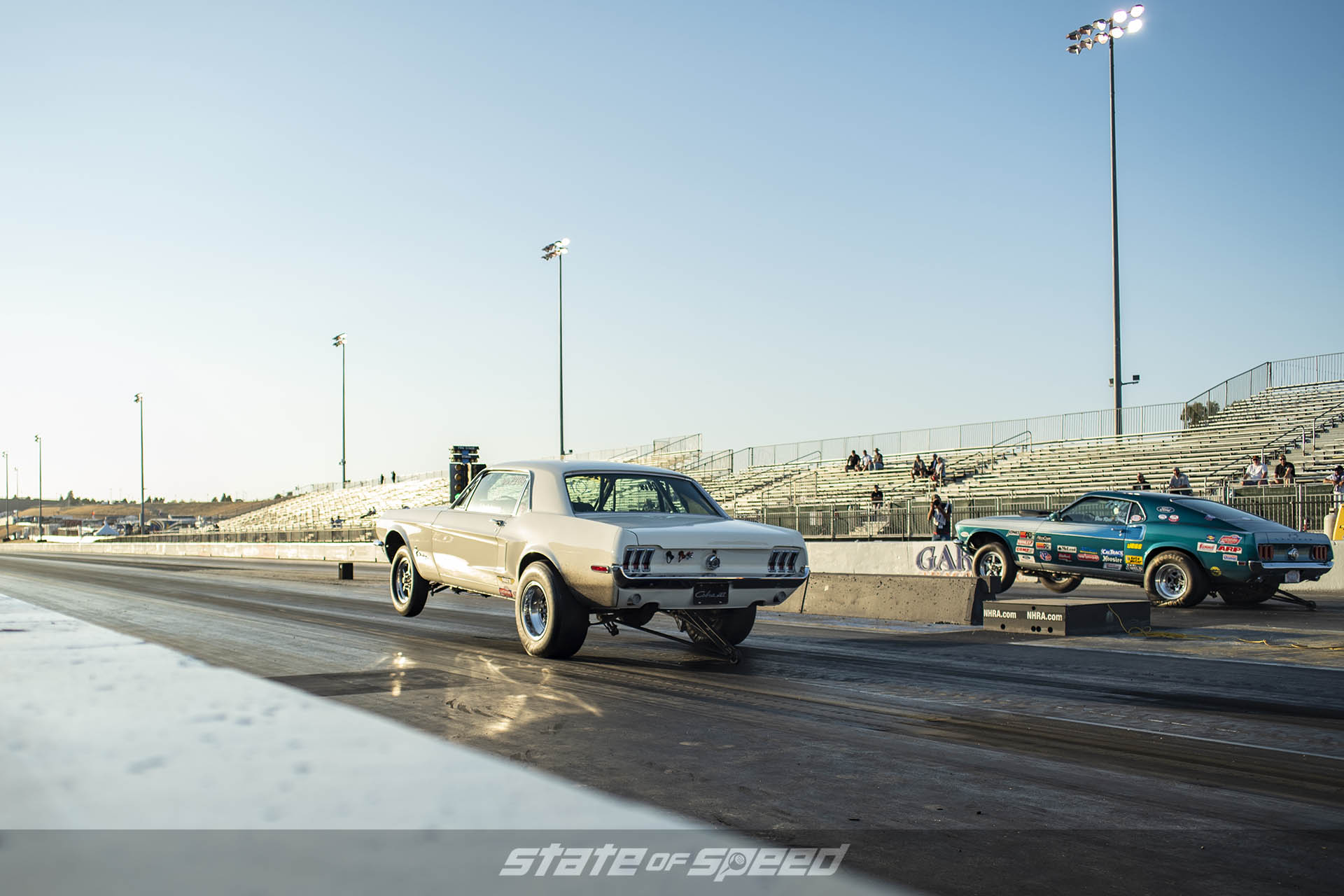 “…Get that battery secure, fix those leaks, and get out of the stands and into the staging lanes…”

When you get the green light, keep it pointed straight, try not to miss any shifts, and if something doesn’t feel right, don’t stay in it – If your car has real problems, move to the side of the track as quickly but safely as you can, instead of laying a stripe of oil or coolant all the way down through the finish line. If everything does go well, once you are past the finish, remember that usually (but not always! Check your local track for their particular procedure) the car in the lane closest to the turn-out has right of way to prevent cutting across the path of another vehicle. 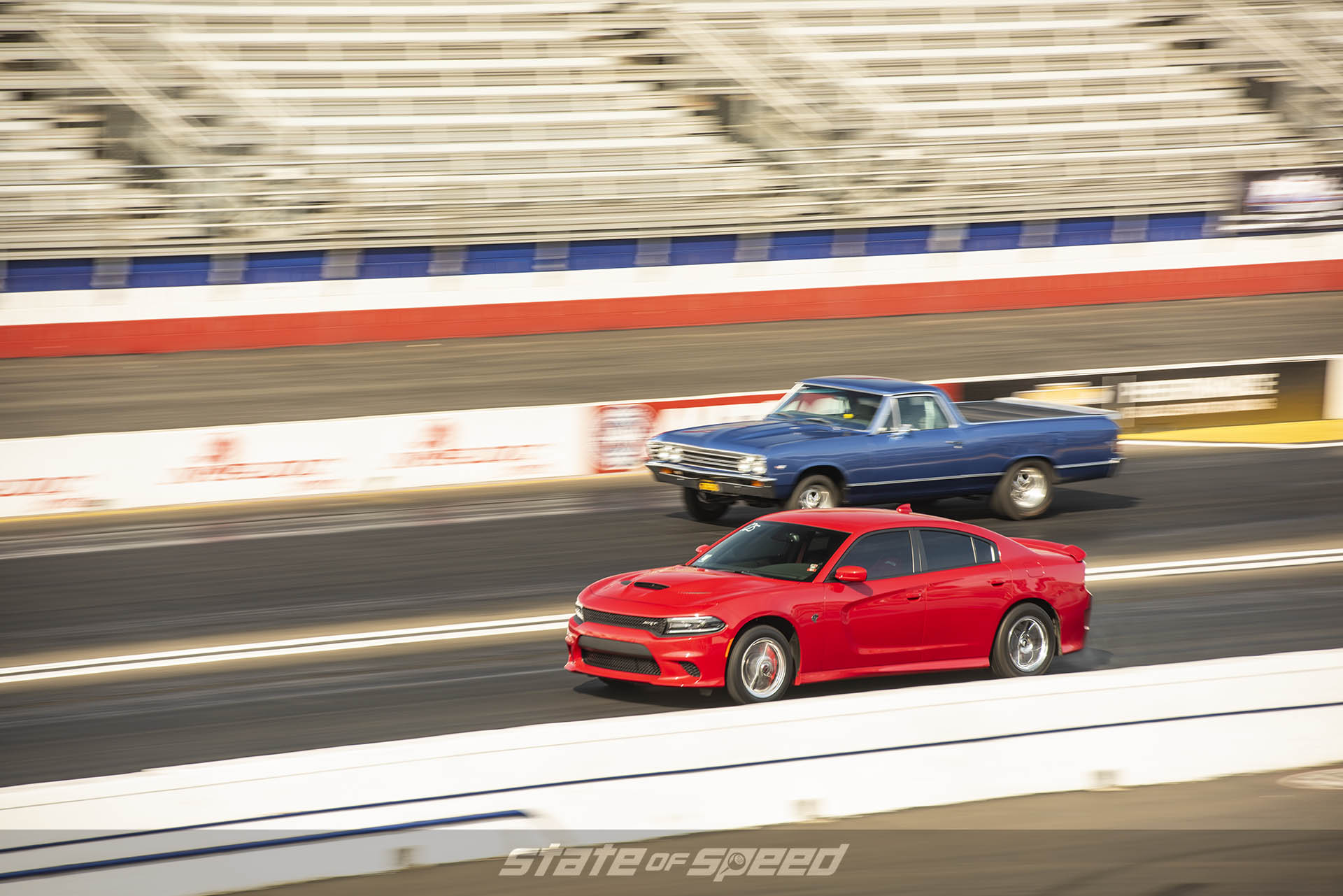 Obviously, we can only scratch the surface in the space we have available here, but there’s lots more to learn – Stay tuned, because there’s more to come! In the meantime, get that battery secure, fix those leaks, and get out of the stands and into the staging lanes of the closest drag strip near you… 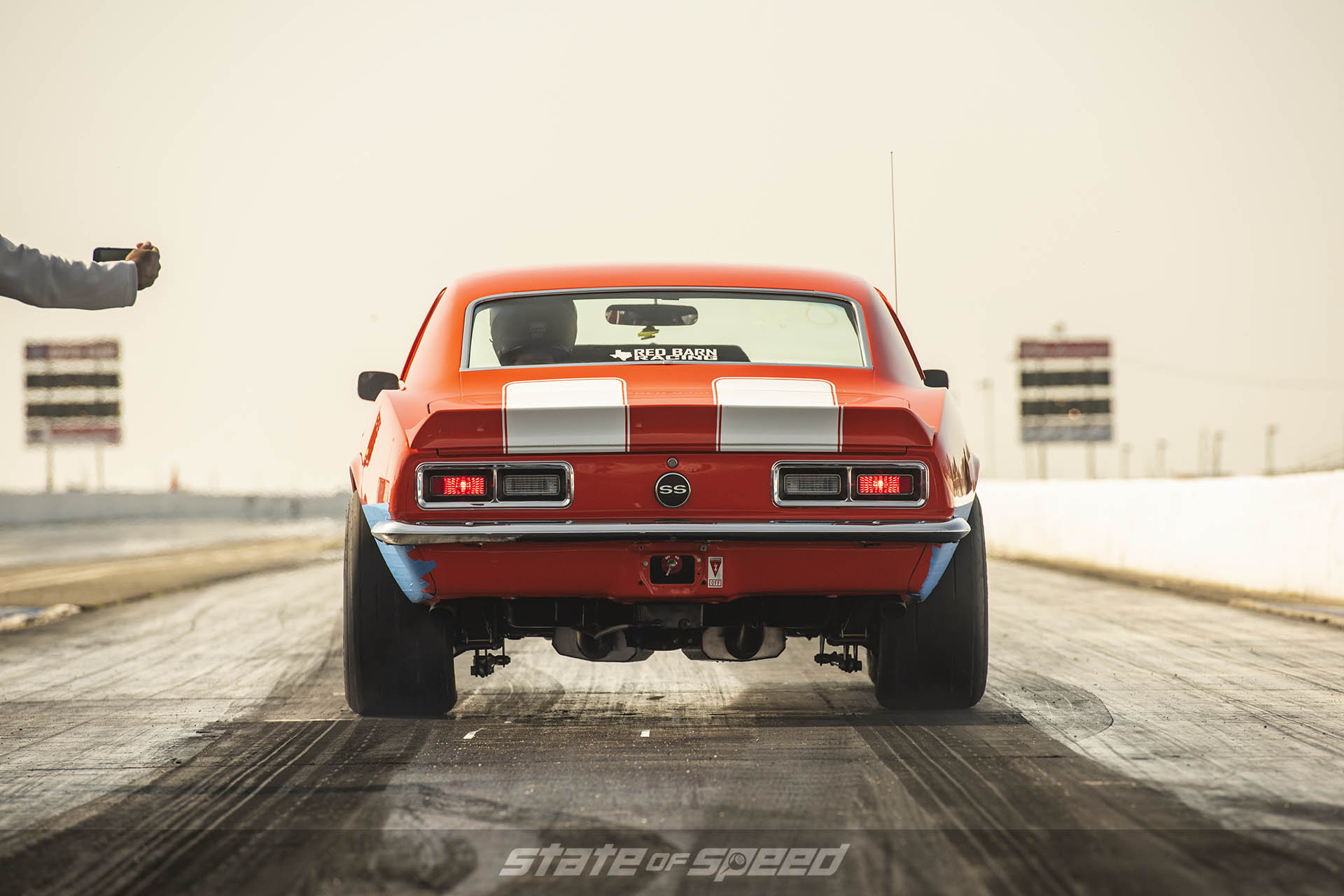