Innovative Turbo Engines You Should Know

Any gearhead can tell you anything you want to know about the RB26DETT from the Skyline GT-R, the MKIV Supra’s 2JZ-GTE, Mitsubishi’s 4G63 that held a starring role in the Eclipse and Evo (and the 4B11T that replaced it in the Evo X), and perhaps even the 13B-REW that propelled the Mazda FD. But if you want real bench-racing credibility, there are turbocharged engines that paved the way for every modern factory boosted powerplant, from WRX STI to Focus RS, and we are going to show you how previous generations suffered and triumphed in the name of boost. Here are the turbo engines that paved the way…

More than five decades ago, General Motors answered a question literally nobody was asking with the first two US domestic OEM turbocharged engines to hit the market. Keep in mind that in the 1962 model year, the world-beating Chevy small block V8 engine was less than 7 years old, and that the future de-facto standard 4-inch bore 350 cubic inch version had just been introduced.

…owners had to keep a small tank of Oldsmobile “Turbo-Rocket Fluid” (actually a 50/50 mix of water and methanol) topped up.

At the time, Buick, Oldsmobile, and Pontiac (known as “BOP” collectively) were still using their own engine architecture instead of shared “corporate” powerplants, and Oldsmobile took their little 215 cubic inch, all-aluminum V8 and boosted it to a nominal 5 PSI with a single Garrett T5 turbo. To combat detonation and increase the effective octane of the required premium fuel, owners had to keep a small tank of Oldsmobile “Turbo-Rocket Fluid” (actually a 50/50 mix of water and methanol) topped up.

Rated at 215 horsepower, the 1962 Olds Jetfire wasn’t a huge success, and the added hassle of having to keep the water/meth tank full meant many owners eventually just had their cars converted to natural aspiration, making original Jetfires very rare and collectable today.

The Chevy Corvair Monza Spyder, also a 1962 model, had a very different engine layout than the Olds – a horizontally-opposed 6 cylinder air cooled engine sat over the rear wheels, displacing just 145 cubic inches (later raised to 164 with a longer stroke in 1964 models) and topped by a single turbo that increased horsepower from 80-95 for the naturally aspirated engines to a rated 150.

Neither the Jetfire or the Spyder set the world on fire, and both had very short production runs. With low gasoline prices and the domestic horsepower wars centered around larger and larger naturally-aspirated V8 powerplants, these two seminal turbo cars were simply too far ahead of their time.

If you’re starting to get mailers from AARP lately, chances are that during your formative years, the word “Turbo” had a single meaning – the Porsche 911T. Known by its internal 930 code, the 911 Turbo started out as a homologation special to meet minimum production numbers for FIA competition, but almost immediately became synonymous for over-the-top performance for street cars. The original 3.0 liter horizontally opposed, air-cooled flat 6 engine used a single KKK (an unfortunate brand name, but not offensive in this context) turbocharger to deliver 256 horsepower.

…those with average or below skill could find themselves going from power-on oversteer to understeer to lift-throttle oversteer in the time it took to ruin a pair of pants.

Between 1975 and 1977, just over 2,800 911 Turbos were produced, and for 1978, the engine was given a 10 percent bump in displacement, an air-to-air intercooler plus a larger ‘whale tail’ spoiler to house it, and an increase in rated horsepower, now listed at 296. While it remained the flagship of the Porsche lineup, the new front-engine V8 928 was intended to replace it as the top of the line, and in 1980 it was dropped from the US market to save the expense of making changes to the engine to meet emissions regulations.

The 928 proved to be a sales dud, and for 1986 the 911 Turbo was back in the US with a 278 horsepower, smog-compliant powerplant. It would remain available through the 1989 model year, when the 930 was succeeded by the 964. During its production run, the combination of a strong rear weight bias due to the engine position and power delivery that suffered from turbo lag gave the original 911T a fairly-well-deserved reputation as a car that was best known for activating rich doctors’ life insurance coverage. Driven well, it was stupid-fast, but those with average or below skill could find themselves going from power-on oversteer to understeer to lift-throttle oversteer in the time it took to ruin a pair of pants. 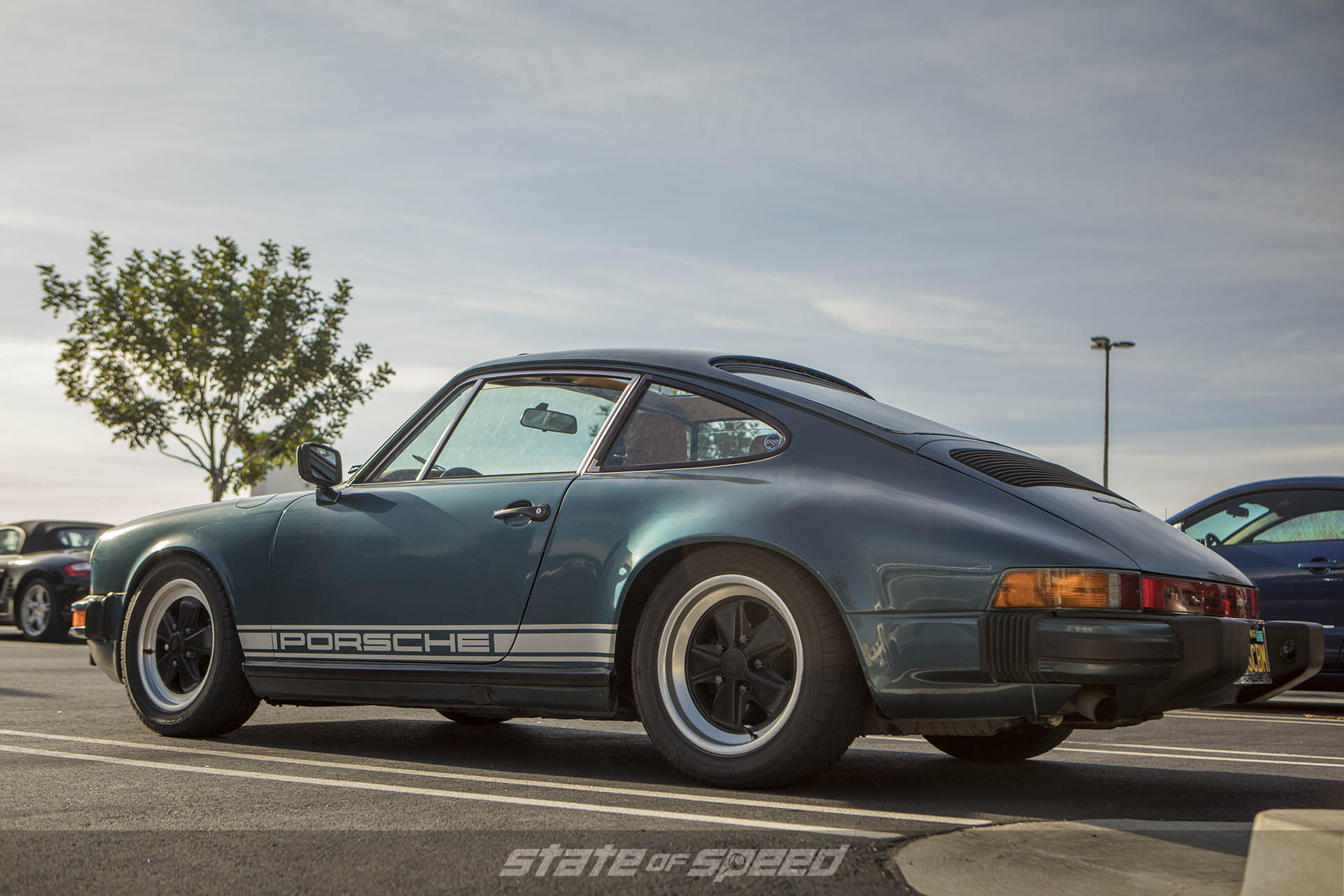 Future generations of the 911 would tame the Turbo’s bad habits and make it a car that was not only quicker but more accessible to non-professional drivers, but there will never be another car that embodied the word “Turbo” so perfectly. 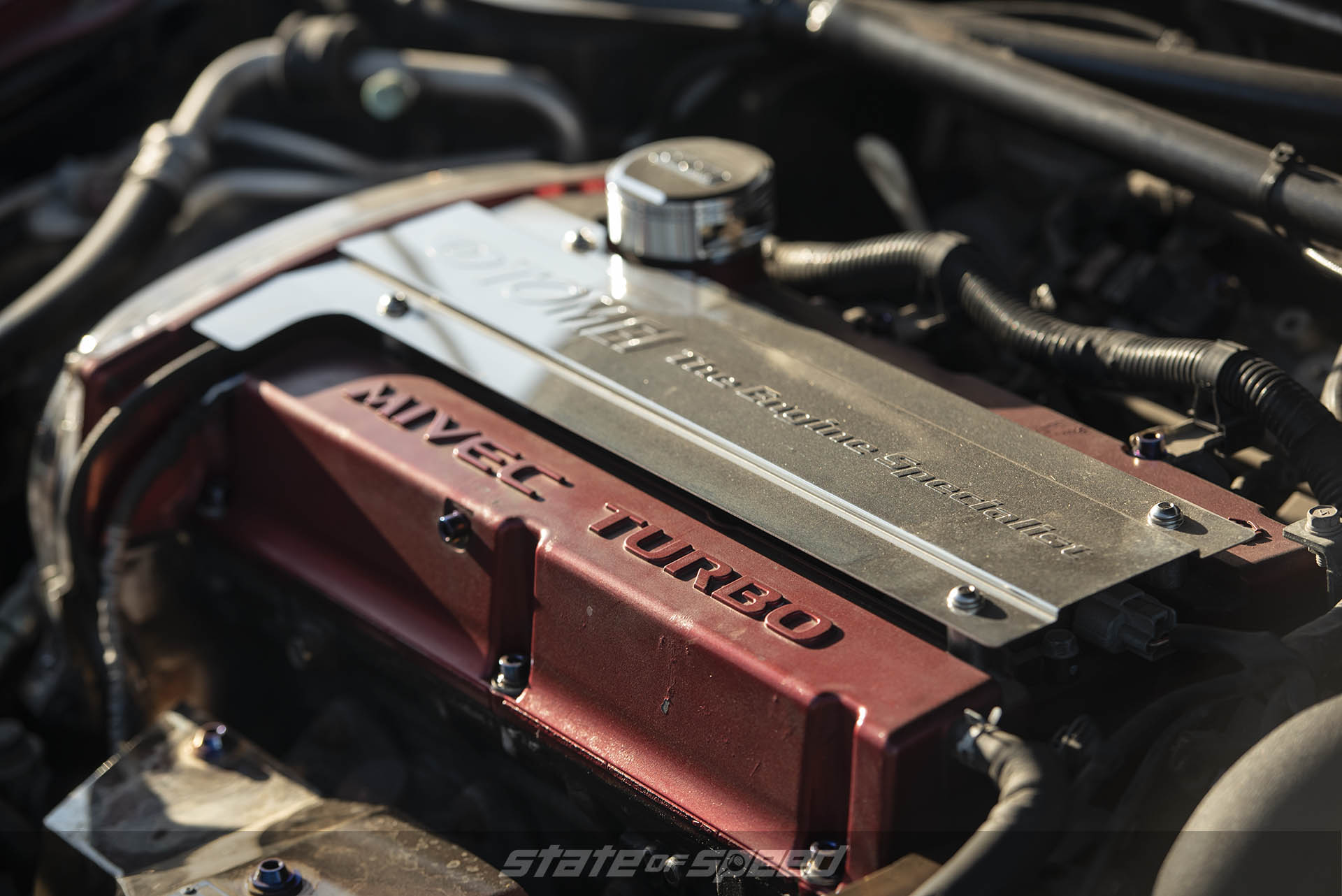 While Porsche was introducing the world to the term “turbo” as a synonym for superlative automotive performance, Mitsubishi was hard at work in what might best be described as their “boost all the things!” era. In the early 80’s other Asian manufacturers were focused on capturing market share by building reliable, economical, durable vehicles for the US export market; Mitsubishi decided to do all that, but then offer a turbo-powered performance variant of almost everything they made as well, from subcompact hatchbacks to family cars. As a result, the world ended up with things like turbocharged versions of the Colt, Galant, Sapporo, Cordia, Tredia, and of course the Starion. Their engine of choice was the inline four cylinder “Sirius” platform, known internally as the 4G6 family.

This engine would eventually become well-known to US enthusiasts thanks to its presence in the Eclipse and Lancer Evolution in 2-liter 4G63 form, but variants ranged from 1.6 liters to 2.4 over its long production history, and 135 horsepower to more than 270 for the factory turbocharged variants. It found its way into all sorts of chassis layouts, including transverse FWD, transverse AWD, and longitudinal RWD.

…Mitsubishi was hard at work in what might best be described as their “boost all the things!” era.

Though the platform had some specific issues (like the infamous “crank walk” familiar to anyone who’s built a high performance 4G63) when pushed beyond factory spec, the durable cast iron block with a ‘closed deck’ design that supports the cylinder bores at the top where they encounter the greatest stress proved to be a winning design, making the 4G6 family one of the most successful turbo engines of all time.

Determined not to be outdone by their rival and sometimes engineering partner Mitsubishi, the Chrysler corporation developed their own lineup of turbocharged inline four cylinder engines during the early 1980s based off of their 2.2 and 2.5 liter architecture. This was a time of both enormous creativity and innovation at Chrysler (“Let’s build a small, practical FWD van that drives like a car and absolutely kill the market for station wagons!”) and complete, shameless cost-cutting (“…and we’ll build it on the same miserable K-car chassis as everything else we are trying to sell!”)

While the bean counting was necessary to save money, and along with $1.5 billion in loan guarantees helped to pull the company from the brink of bankruptcy, there were still powertrain engineers looking to make lemonade out of the post-oil-crisis lemons they had been handed. The Turbo I design added a T03 turbo pushing a little over 7 pounds of boost to the 2.2 liter engine, taking it from the low-90-horsepower range to over 140. Upgrading the mechanical wastegate to a computer-controlled one for 1985 allowed temporary spikes to 9 PSI and another couple of horsepower “at the brochure,” though the real benefit was more power under the curve that made more of a difference in actual acceleration than peak numbers would suggest. The larger-displacement 2.5 liter Turbo I found a home in the iconic Caravan/Voyager minivans starting in the 1989 model year, with 150 horsepower on tap. 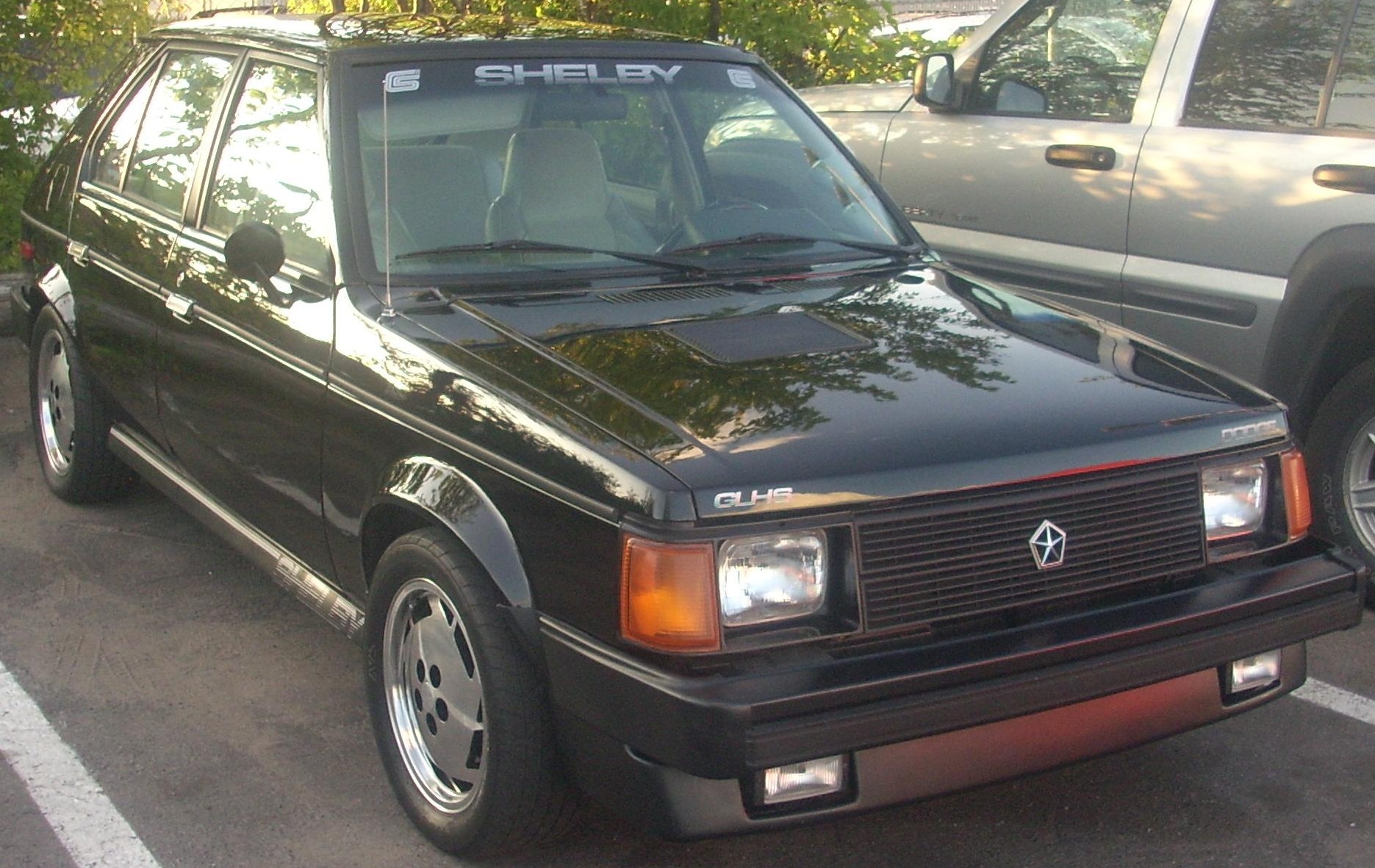 The Turbo II added an intercooler and some other tweaks to the 2.2 liter Turbo I for use in the Shelby GLH-S in 1986 by Shelby Automotive, and for 1987 the factory began doing the same thing, but with better engine internals. More Shelby-badged performance cars followed using the Turbo II powerplant, rated at 12 PSI and 175 horsepower, as well as the LeBaron GTS and GTC. A switch to a Lotus-sourced 16 valve dual overhead cam cylinder head (replacing the previous SOHC head came with the Turbo III; very few cars (perhaps less than 2,000 total) were equipped with this 224 horsepower engine, primarily 1991-1993 Dodge Spirit R/T and Daytona IROC R/T models.

“Let’s build a small, practical FWD van that drives like a car and absolutely kill the market for station wagons!”

Then there’s the Turbo IV. Despite the nomenclature, it was actually introduced before the Turbo III, making its first appearance in the 1989 Shelby CSX, then being offered in 1990 in Shadows, Daytonas, and LeBarons. This SOHC, 8-valve 2.2 liter engine was notable for the fact that it used a Garrett “Variable-Nozzle Turbo” – this technology, which has made its way into diesel turbo applications today, uses a ring of movable vanes that surround the turbine wheel that allow the engine management system to dynamically adjust the characteristics of the turbo to allow fast spool-up without choking performance at high RPM. While rated horsepower was still set at 175, once again the area “under the curve” on the horsepower graph was greatly improved, making for a much quicker car. A relative handful of Turbo IV cars were made, and today, ones with unmolested factory VNT setups demand a premium from collectors.

Chrysler’s 2.2 and 2.5 turbo family combined some interesting technological innovation along with mass-market production numbers (at least for the Turbo I/II) and the common K-car platform made modifications and swaps pretty straightforward. We know there’s at least one 9-second street-legal turbo Voyager minivan out there, and these cars make excellent sleepers with their durable, easily upgradable engines.

“What is Volvo doing in here?” you ask, quite rightly. “They’re that company that made a bunch of boring cars that looked like they were built from LEGO bricks in the ‘80s and ‘90s, and now all they do is weird, expensive crossovers.” While this is mostly true, some of those bricks were turbo-powered, and just like capital-T Turbo is intertwined in the gearhead consciousness with Porsche, capital-I Intercooler belongs to Sweden’s homegrown brand (even if they are owned by China’s automotive super-conglomerate Geely these days.)

“They’re that company that made a bunch of boring cars that looked like they were built from LEGO bricks in the ‘80s and ‘90s, and now all they do is weird, expensive crossovers.”

The Volvo “Redblock” engine family came about as an overhead cam replacement for their tried and true pushrod inline-fours from the 1960s, debuting in the 200 series cars. 2.1 and 2.3 liter turbocharged versions made their way into models bound for the US market. Power was modest at first – 127 horsepower for the low-boost 6.5 PSI B21FT – but soon enough, Volvo dropped the “IBS” (Intercooler Boost System) B21FT on us, complete with 157 horsepower and a big “INTERCOOLER” badge on the trunklid, rising to 162 horsepower for mid-’80s turbo 240s. 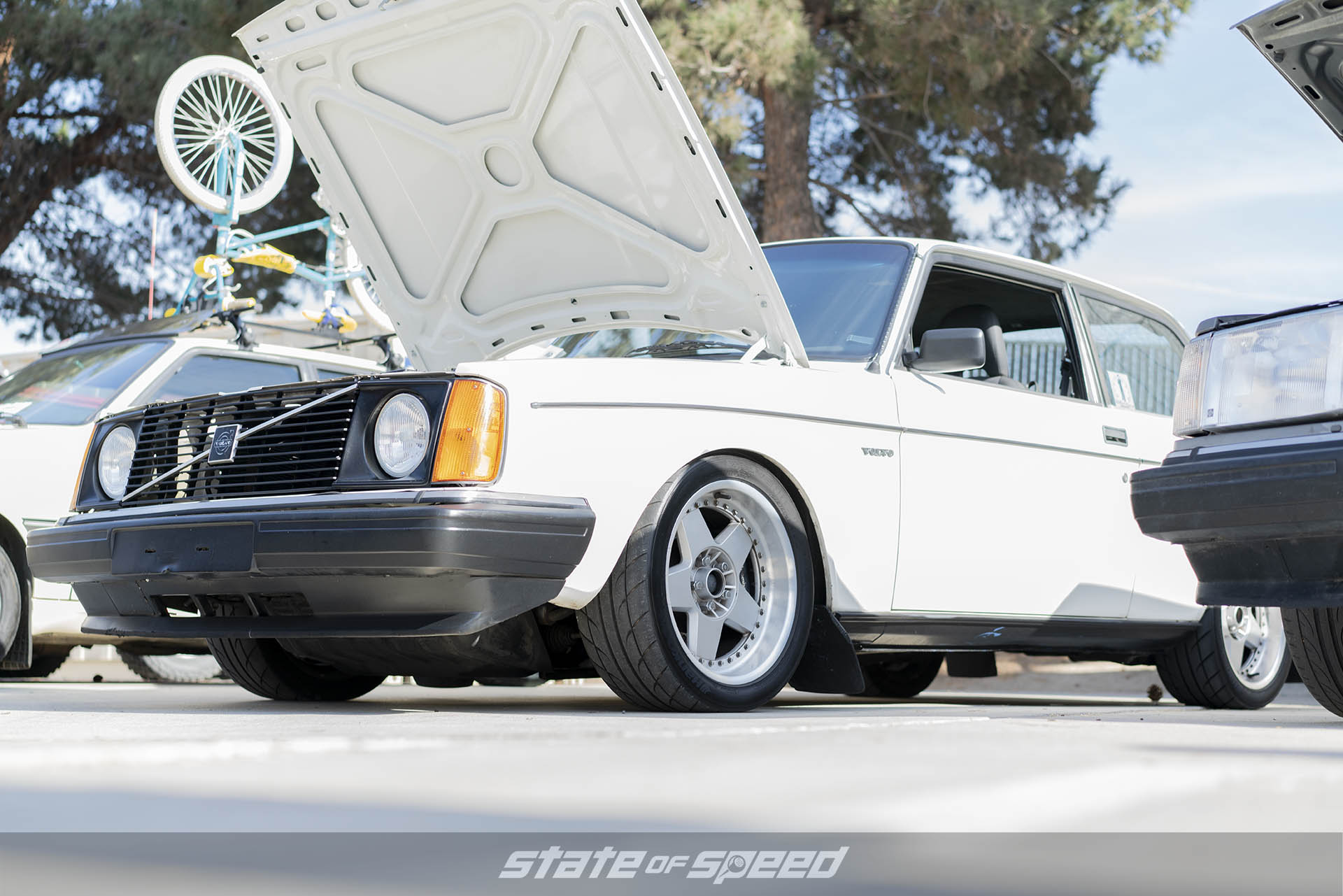 Turbo Redblock engines made the transition from 200 to 700 series cars at the tail end of the ‘80s, picking up a 16-valve head in the process and another 40 or so horsepower, before eventually being replaced by the prolific and very successful Volvo Modular family in the 800 and 900 series of FWD/AWD cars. Even though they weren’t around for as long as some of the designs we’ve looked at here and weren’t exactly sports cars on the same plane as the 911T, they led to a long line of popular turbocharged Volvo vehicles and put the word “Intercooler” firmly into our vocabulary.