Business in the Front, Party in the Back

The pickup truck is as American as apple pie and the Chevy El Camino is apple pie à la mode. Of course, being an agricultural driven country the pickup has been the vehicle of choice for generations and as we have often seen, GM was caught back footed when Ford introduced their Ranchero in 1956. The Ranchero was based on a two-door, station-wagon platform that had an integrated cab and pickup bed unlike a regular pickup that has a separate cab and bed.

But wait, the history can be traced to Australia where Ford offered two roadster pickups in 1932, one with a straight-side bed known as the Standard Utility Car or ‘Ute’ for short. The popularity of such a beast caused one lady to apparently write to Ford Australia asking for “a vehicle to go to church in on a Sunday and which can carry our pigs to market on Mondays”.

The letter caused Ford designer Lewis T. Bandt to begin work later that year on marrying a coupe to a pickup. His happy marriage appeared in 1934 when a coupe body was joined to an integrated pickup bed. The Ute was only ever really popular in Australia until the Ranchero was invented to meet the same needs for a comfortable pickup that could do double duty as a utility vehicle and a cruiser. While the concept was sound, sales for 1957 did not reach 22,000. Nevertheless, its mere introduction caused GM to take notice.

While GM was behind Ford, there were some directional indicators in 1955 when Chevy introduced their factory-customized Cameo Carrier pickup. Although based on Chevy’s regular pickup, the Cameo had many car-like features including car-like interior, optional engines, automatic rather than stick transmissions and power-assisted brakes and steering. The big difference initiated by designer Chuck Jordan was the ditching of the running boards and the use of fiberglass bedside panels to afford a more integrated appearance. Chevy sold some 5,200 units in ’55 but sales slumped in ’56 to 1,460 and in ’57 to 2,240. Only 500 were sold in ’58 and the model was dropped.

The new-for-’59 Chevy El Camino, which means “the path” or “the way” in Spanish, was based on the Brookwood two-door station wagon as was the sedan delivery and it emulated the styling of the full-size Chevy Impala. Up front there were twin intakes above a full-width grille flanked by dual headlights. The greenhouse featured a huge wrap-around windshield and an unusual and dramatic “flying wing” top that was an abbreviated version of the tops on full-size cars.

The rear was equally wild with sweeping airplane influenced “batwing” fins that emanated from just behind the cab and ran the entire length of the bed—it was about as far as fins would go. Wide “cat’s eye” taillights were split along the bed line. This was no hog-hauling pickup this was cruiser personified.

The new-for-’59 Chevy El Camino, which means “the path” or “the way” in Spanish was based on the Brookwood two-door station wagon… 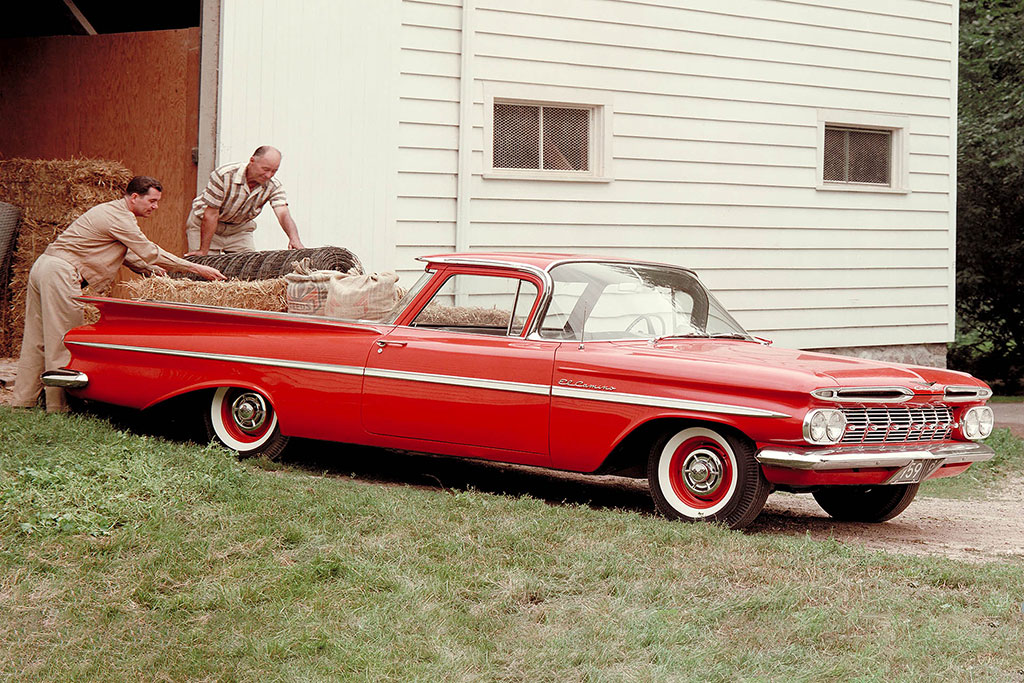 Sales of the ’59 El Camino were brisk at 22,246 units but they were by no means staggering and they fell off the following year to 14,163. “The road” came to an end, at least for the time being.

As Ford persisted with the Ranchero, Chevrolet had little choice but to reintroduce their version in 1964, however, it was based on a mid-size platform rather than the preceding full-size platform. Car design had moved away from the fins of the fifties and the new Camino was a very clean design based on the Chevelle two-door wagon. Indeed, it carried both badges. 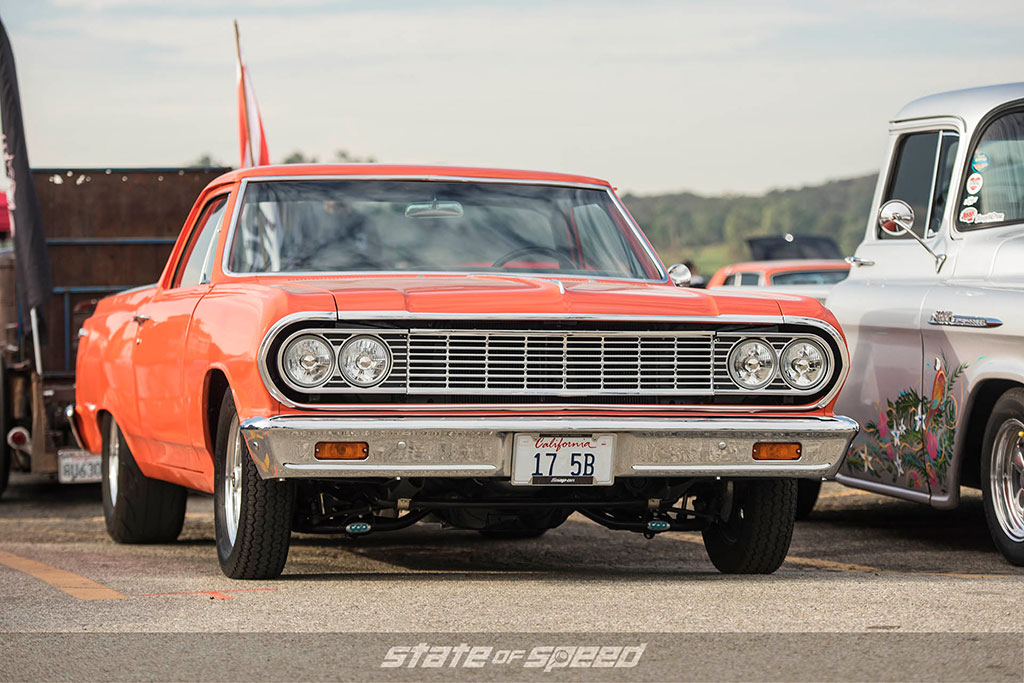 Under the hood there was three optional sixes plus two versions of the 327 rated at 250 and 300 hp. The hot version featured a high, 10.5:1 high-compression, a larger 4bbl carb and dual pipes.

For the following year the Chevy El Camino was subject to the same facelift as the Chevelle with a sharper V’d front end behind which you could get a new L79 327 producing 350 hp. At the dragstrip it could run the ¼ in the low 15s at 90 mph.

We recently dropped in on Kevin Elliott of Kev’s Rod & Custom, La Habra, CA, where they recently completed the full restoration of a ’65 for Charlie Currie of Currie Enterprises.  “This was quite a rust bucket,” said Kevin “We had to replace everything but the roof, the firewall and the front fenders. You know when you send a car out for blasting and only part of it comes back? Well, nothing came back. It has a complete new floor and we had to make special tools to repair the bed.”

From Kev’s the Currie El Co went to Mickey Larson at Twins Custom Coaches that, at the time, was located in Pomona, CA. There it was painted at Mick’s Paint but not by Mick’s Paint. The color is GM Arrival Blue by PPG.

Finally, in 1966, Chevy dropped in the 6.5L 396 that could put out a max of 375 hp and now run the ¼ in the 14s. It was a hot rod truck alright. Besides the engine there was new bodywork, a new dash with horizontal sweep speedo, optional tach and optional Strato swiveling bucket seats.

In 1967 there was another facelift and minor changes but the big news came in ’68 with the introduction of the Super Sport SS-396 of which the L78 version had solid lifters, large-port heads and an 800 cfm Holley 4bbl carb. As it did in 1966, the L78 produced 375 hp. The vehicle was now longer but still based on the Chevelle station wagon with a 116-inch wheelbase and overall length of 17 feet, three inches. 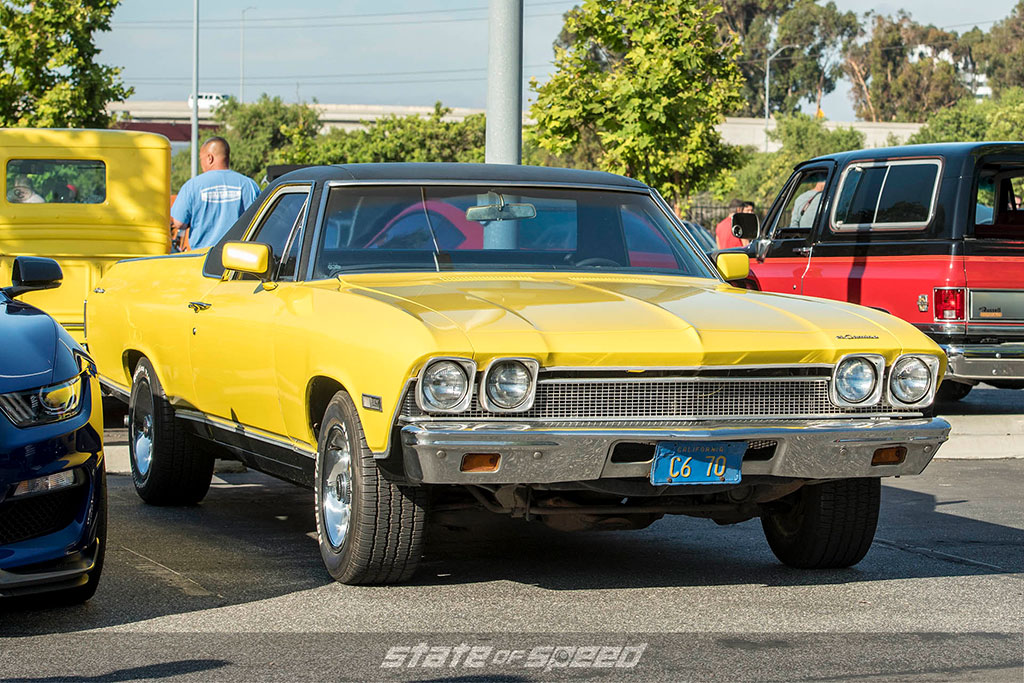 Recently, we were able to check out a ’70 El Co SS built for Amir Rosenbaum of Spectre Automotive at the SO-CAL Speed Shop. The truck was built to compete in autocross events, specifically the Optima Ultimate Street Car Challenge, and features a set-back 7.0L 427 ci Corvette Z06 LS7 engine. It produces 650 hp and almost as much torque transmitted through a Tremec six-speed manual trans. The suspension came from Global West, the six piston brakes from Baer and Italian five-spokes from OZ. The truck, featured on the TLC TV show ‘Hard Shine,” was painted in single-stage black with silver stripes at Micks Paint, Pomona, CA.

New front-end styling came in for 1971 but emissions controls were lurking and the dreaded ‘smog pump’ was added strangling performance. For example, the LS5 454 only produced 365 hp and the LS6 454 was nixed. The switch to ‘net’ figures came in and the 402 ci 396 was rated at 240 hp while the 454 that was only available in the SS model, was rated at 270 hp.

By the time of the fourth Generation, 1973-’77, the El Co was breathing hard, constricted by smog devices and getting heavy. It was middle age spread and the vehicles no longer looked svelte and cool. Gen IV was the largest El Camino and they had wide bumpers like boat transoms and optional fake wood grain side trim. Sales of Gen IV started well at just under 65,000 units for ’73 but by the end of the run in ’77 they were down 10K units.

Things did improve for Gen V (1978-’87), however, the El Co now shared a frame with the Malibu and V6 engines replaced the big-blocks. Those days were done. Nevertheless, overall the car looked better after it’s Weight Watcher’s program, more clean and sharp edged and a lot less boat-like.

Things got smaller under the hood too when the standard engine became the 3.8L V6 producing a whopping 110 hp. California, meanwhile, got the anemic Buick V6. And, the SS model was now shipped out to Choo Choo Customs of Chattanooga, Tennessee it did not, however, get the L69 engine of the Monte Carlo SS.