The Little Chevy That Could.

The story of the Chevy II Nova can be traced back to Germany and the Volkswagen Beetle, believe it or not. VW’s Bug made such an impact on the automotive world that it jump-started GM to develop its own air-cooled competitor, the Corvair. Despite the “Nader-sayers,” the Corvair did well and forced Ford to develop the Falcon that debuted late in 1959. The Falcon took off and sold a staggering 417,000 units in the first year.

GM was caught off guard, meanwhile, Ralph Nader was killing the Corvair, saying it was dangerous; GM had to do something, and quickly. According to Chevrolet designer Clare MacKichan, “There was no time for experimentation or doodling around with new ideas from either the engineers or from us in design, and it had to be a basic-type car. I think that was the quickest program we ever did at any time,” he continued. “We worked night and day on that car, and it didn’t take very long to run it through our shop because we had a deadline.”

Indeed, the development of the Chevy II, as it was called, took a scant 18 months until the first production car came off the Willow Run assembly line in August 1961—almost two years behind the Ford Falcon. Conventional like its rival and definitely not experimental like the Corvair, the Chevy II, code name H-35, was described by Chevrolet General Manager Ed Cole as offering, “Maximum functionalism with thrift.”

“There was no time for experimentation or doodling around with new ideas from either the engineers or from us in design.”Clare MacKichan, Chevrolet Designer

While the Falcon was a “clean sheet” design with uni-body construction, the Chevy had a front sub frame that bolted under the body. Power options were either a 2.5L 153 ci four-cylinder or a 3.2L 194 ci in-line six. Both were brand new, but the four was the first four from Chevy since 1928. There was no V8—yet. As did the Falcon, the Chevy II came in two- and four-door versions plus a two-door hardtop Sport Coupe as well as a convertible and a station wagon. The Nova was the top of the line and Chevy II sales were brisk at 326,607 units, but not as brisk as Ford’s rival.

Sales improved in 1963 when Chevy II had its best year ever with sales of 372,626 units, of which 42,432 were the new Super Sport featuring bucket seats, a floor shifter and special gauges on the inside and exterior emblems, hub caps and side moldings on the outside. Mind you, the package only cost $160.40. There was still no V8. 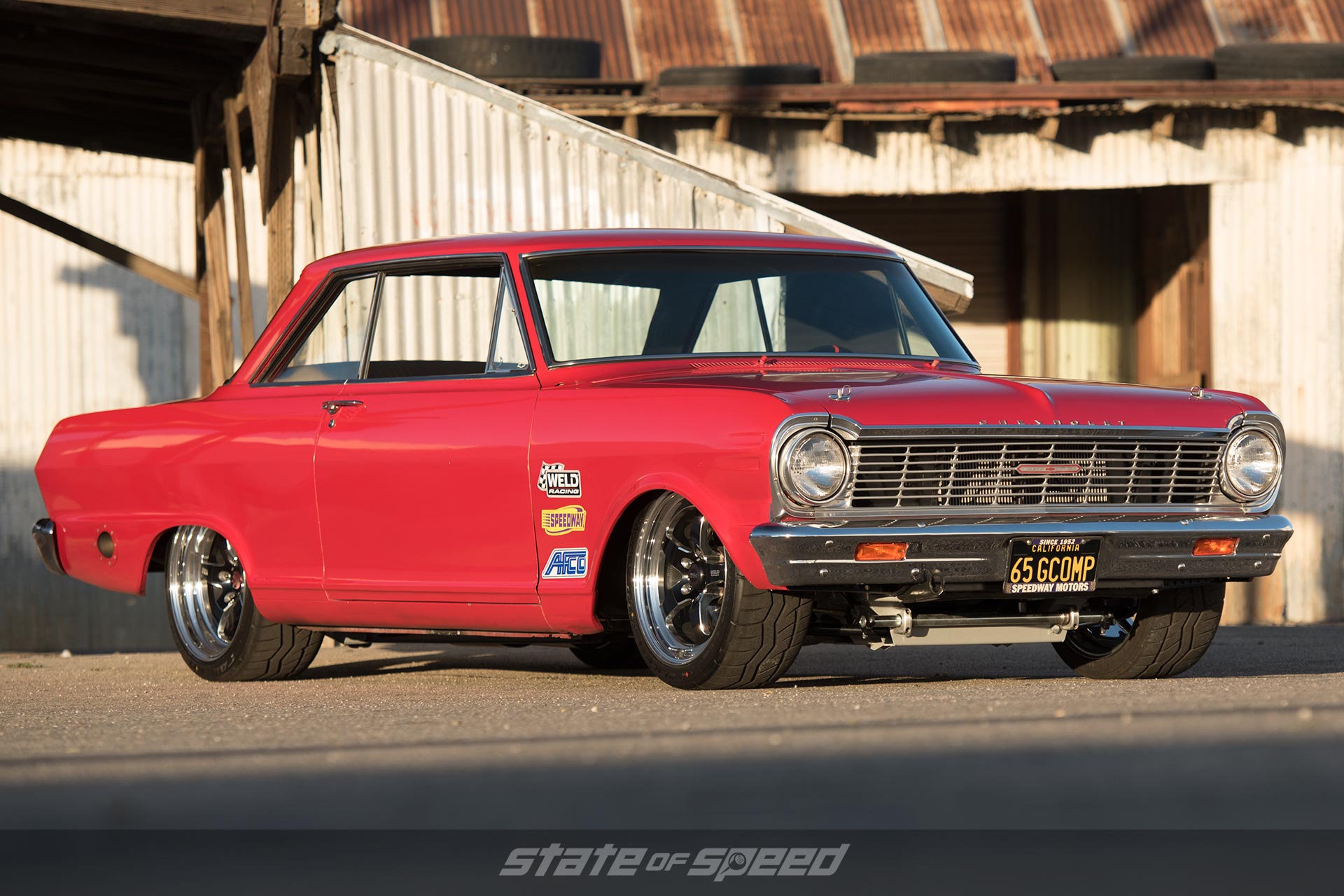 When the 195 or 220 hp V8 did come in 1964, sales tanked to a mere 191,691 units of which only 25,083 had the new 4.6L 283-ci V8 power. The cause of the slump was similar to that of the Falcon when Ford introduced the Mustang because Chevy intro’d the Chevelle and put a nail in the Nova. However, in April 1964, Chevrolet unveiled the “Super Nova” concept car at the New York Auto Show. A little fat through the middle, and resembling the ’63 Buick Riviera, Super Nova never made it to production.

The second generation Nova came in 1966 and it’s knife-edge styling may have been influenced by the Super Nova. Regardless, it was a sharper, better-looking car. Sales increased over ’65 but only to 172,485 cars, of which 43,265 were V8s. Maybe customers were confused by the sales brochure that proclaimed “Chevrolet Chevy II Nova Super Sport.” What really grabbed buyer’s attention was the new 5.3L Turbo-Fire 327 ci V8 producing 350 hp. With a close-ratio four-speed the Nova was finally a performance car—10,589 were sold. Nicknamed the “Chevy Deuce,” the ’66 327 car was a hot rodder’s dream. 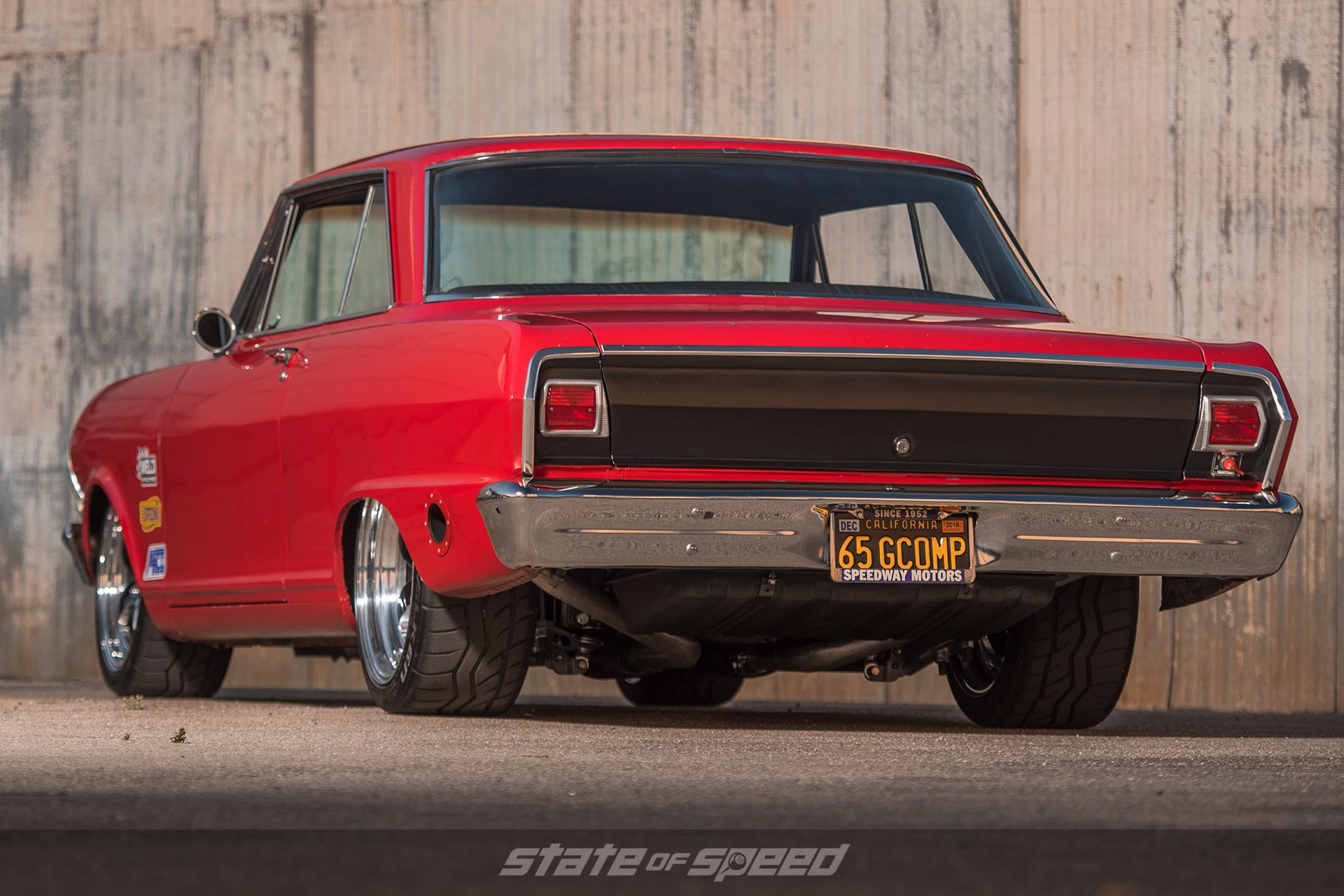 One such hot rodder was GM designer Larry Shinoda, designer of several Corvettes. Folklore has it that Larry drove a tricked-out Chevy II, and driving into the GM Tech Center one day he was stopped by the security guard for what the guard perceived as overzealous driving. The guard apparently said, “Why don’t you try that again.” Not to be told twice, Larry backed up, gave it some revs, side stepped the clutch and smoked the tires right through the security zone. He never looked back and the guard didn’t move. 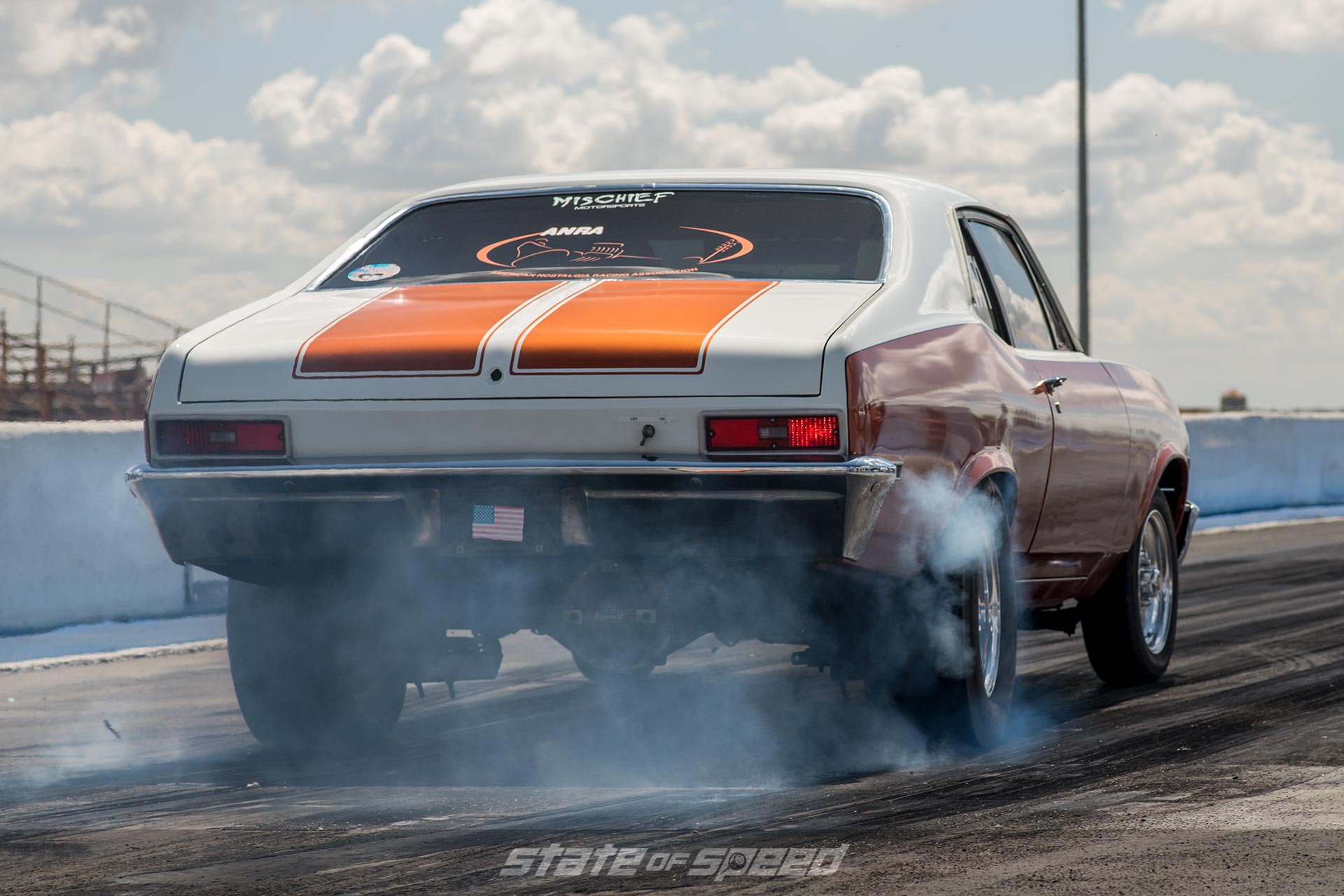 One of the first drag racers to see the light was Bill “Grumpy” Jenkins from Malvern, Pennsylvania, who without factory backing began racing “Grumpy’s Toy,” an L79 Chevy II in A/Stock class. Bill killed it but soon switched to the new Camaro. Much like Ford killing the Falcon with the Mustang, Chevy was about to do the same to the Nova with the Camaro. However, it was not dead yet. Meanwhile, “Jungle Jim” Liberman began driving Funny Cars in 1965 using a Nova body before building a new, steel-bodied Chevy II “Jungle Jim” Funny Car in 1966. Jim became a fan favorite with his 100-mph back-ups and quarter-mile wheel stands. Jungle’s touring success in ’67 prompted him to build a sister car for Clare Sanders for the ’68 season. Meanwhile, west coast fans cheered for header manufacturer Doug Thorley’s “Chevy 2 Much.” 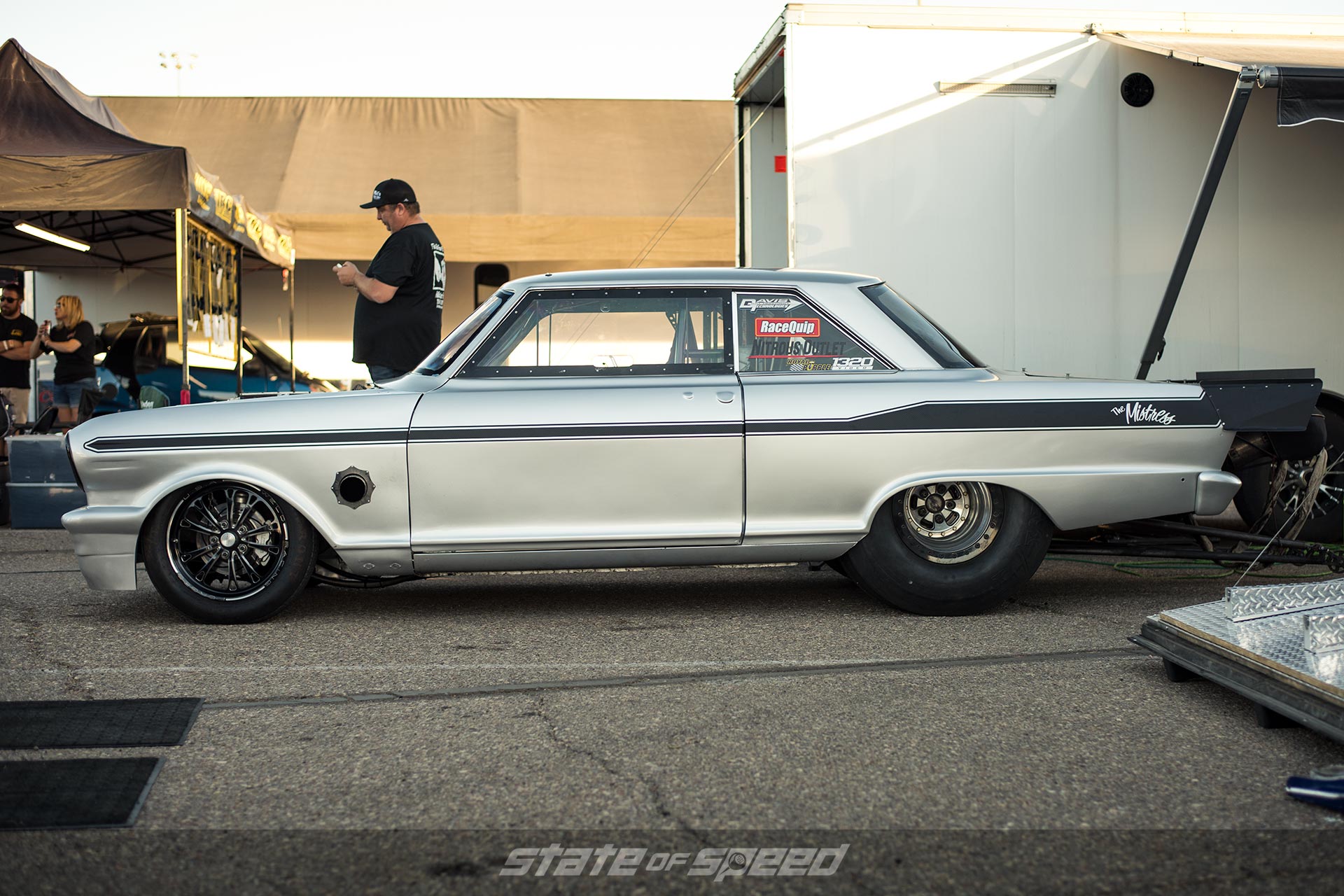 Not to be told twice, Larry backed up, gave it some revs, side stepped the clutch and smoked the tires right through the security zone. 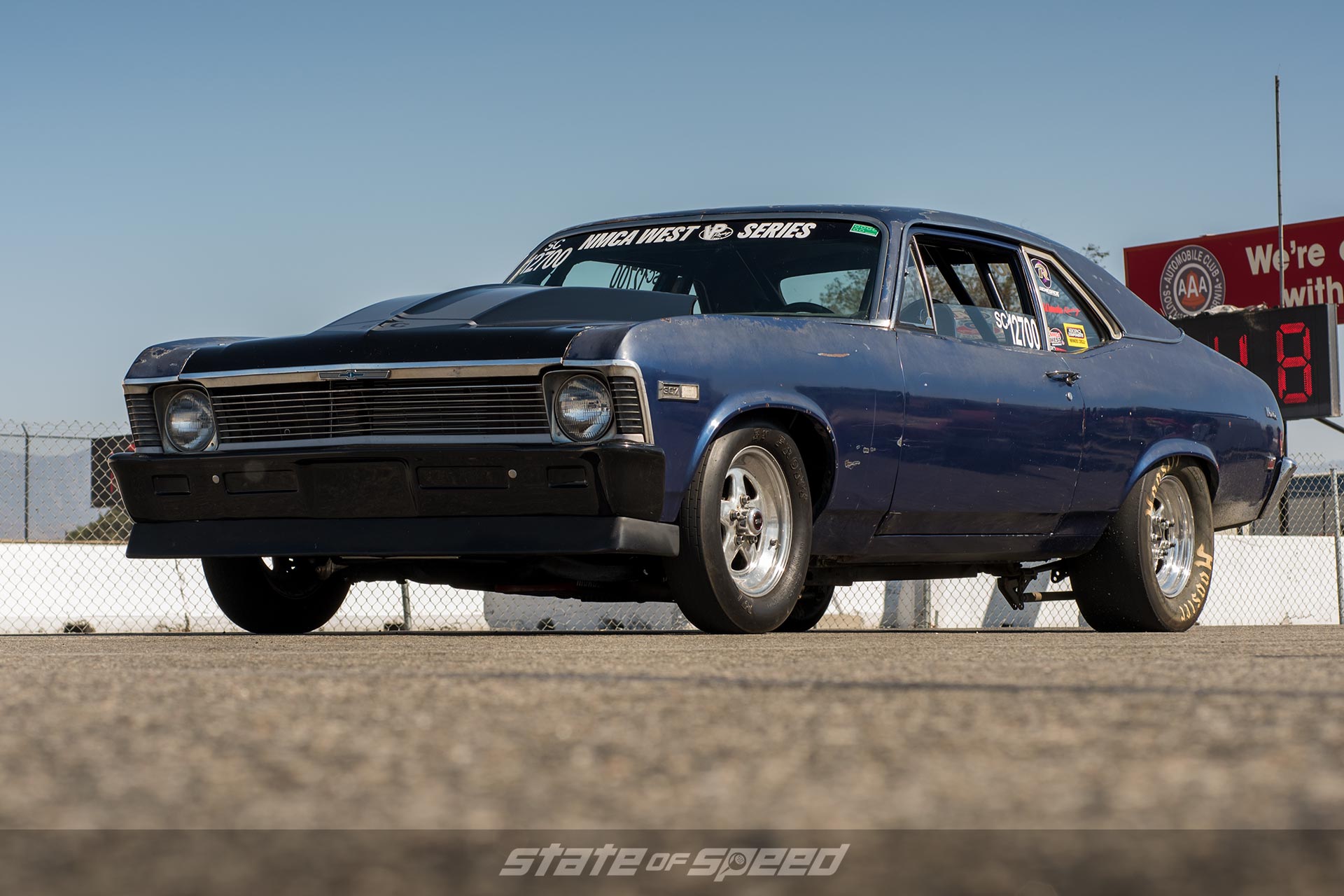 Gen III came in 1968 when the car was completely redesigned; unfortunately, the station wagon and the hardtop sport coupe were axed. Technically this was still a Chevy II available as a two-door coupe; a four-door sedan and bowing to European influence a three-door hatchback. The semi-fastback styling, the rakish grille and a slightly longer wheelbase put the car in a different bracket; it was still a compact but in reality in name only. 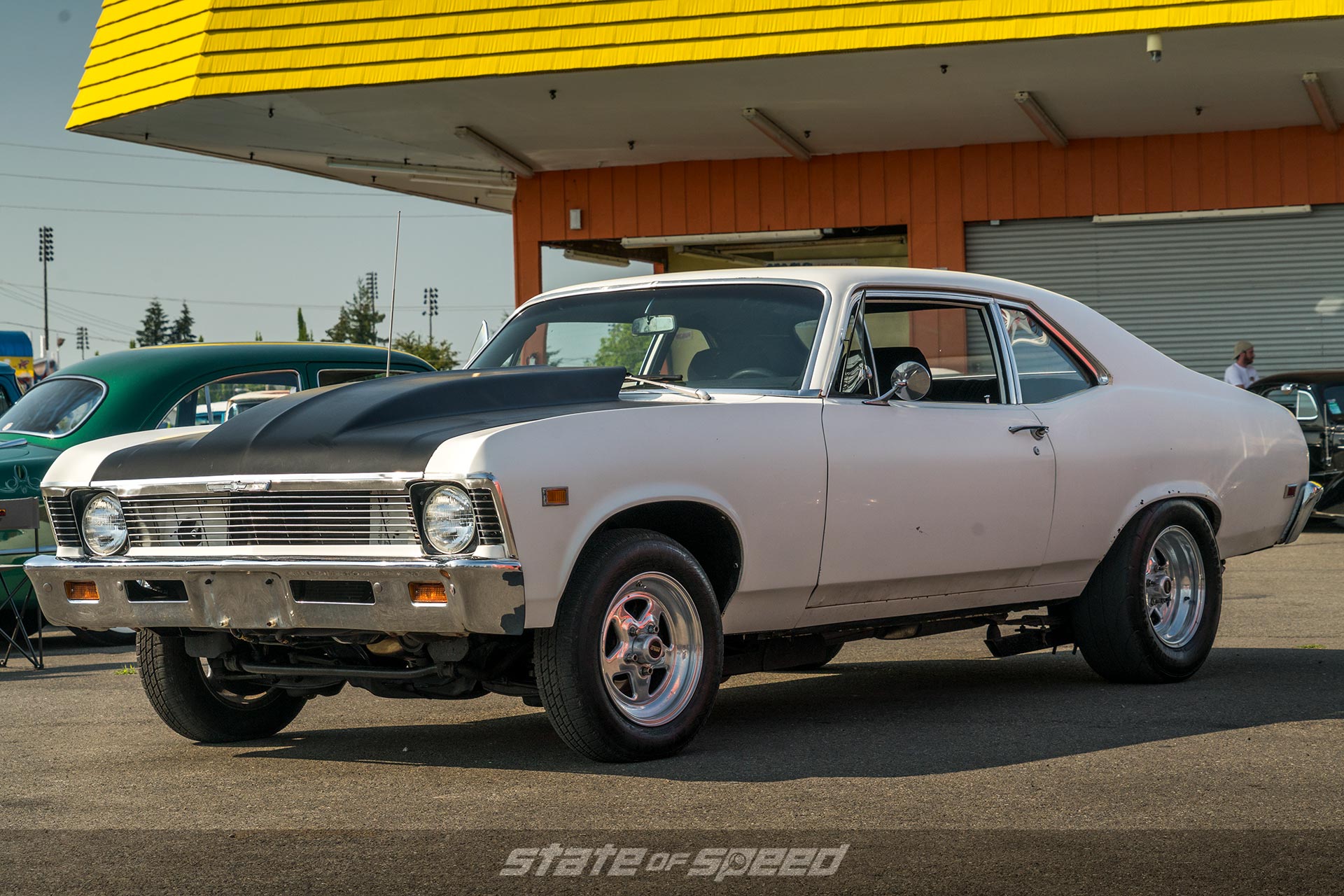 The performance dealers were quick to see the sales potential and began ordering the L78 396s. Meanwhile, drag racer Dick Harrell, who had built cars for Nickey Chevrolet in Chicago, and Yenko in Pennsylvania, moved to Kansas City where he swapped 500 hp 427 Rat motors into Novas for Fred Gibb Chevrolet.

In 1969, Chevrolet dropped the Chevy II moniker and just called it the Nova—like everybody else. Power for the Chevy Nova SS model was increased to 300 hp and for the first time the SS came with front disc brakes. It was, after all, 1969. Unfortunately, the 396 option that was actually a 402 ci, was dropped the following year. In 1969, Yenko had ordered 38 Novas with the 396 option, but in 1970, Yenko ordered a further 175 equipped with the high-performance LT1 350 ci small-block V-8 used in the Camaro Z-28 and the Corvette. With an upgraded drive train, he called that model the “Yenko Deuce,” as in Chevy II. Unfortunately, however, new regulations were gradually eating away at the muscle and by ’73 the SS option was little more than a decal package. Nevertheless, the ’69 remains the quintessential Nova as evidenced by comedian Joe Rogan’s hot rod with ’69 Camaro fenders built by Steve Strope’s Pure Vision Design.

New, mandated energy-absorbing bumpers added to the length but not the aesthetics and sales of V8s declined. The last hurrah came in 1974 with the introduction of the “Spirit of America” to celebrate the upcoming 1976 bicentennial. The cars were painted a patriotic white with blue and red stripes and interiors. Meanwhile, the body was cloned for the Olds and Buick divisions, heck, even Pontiac got in on the game with its Nova-like GTO, albeit with a Pontiac signature split grille. It was badge engineering at its best.