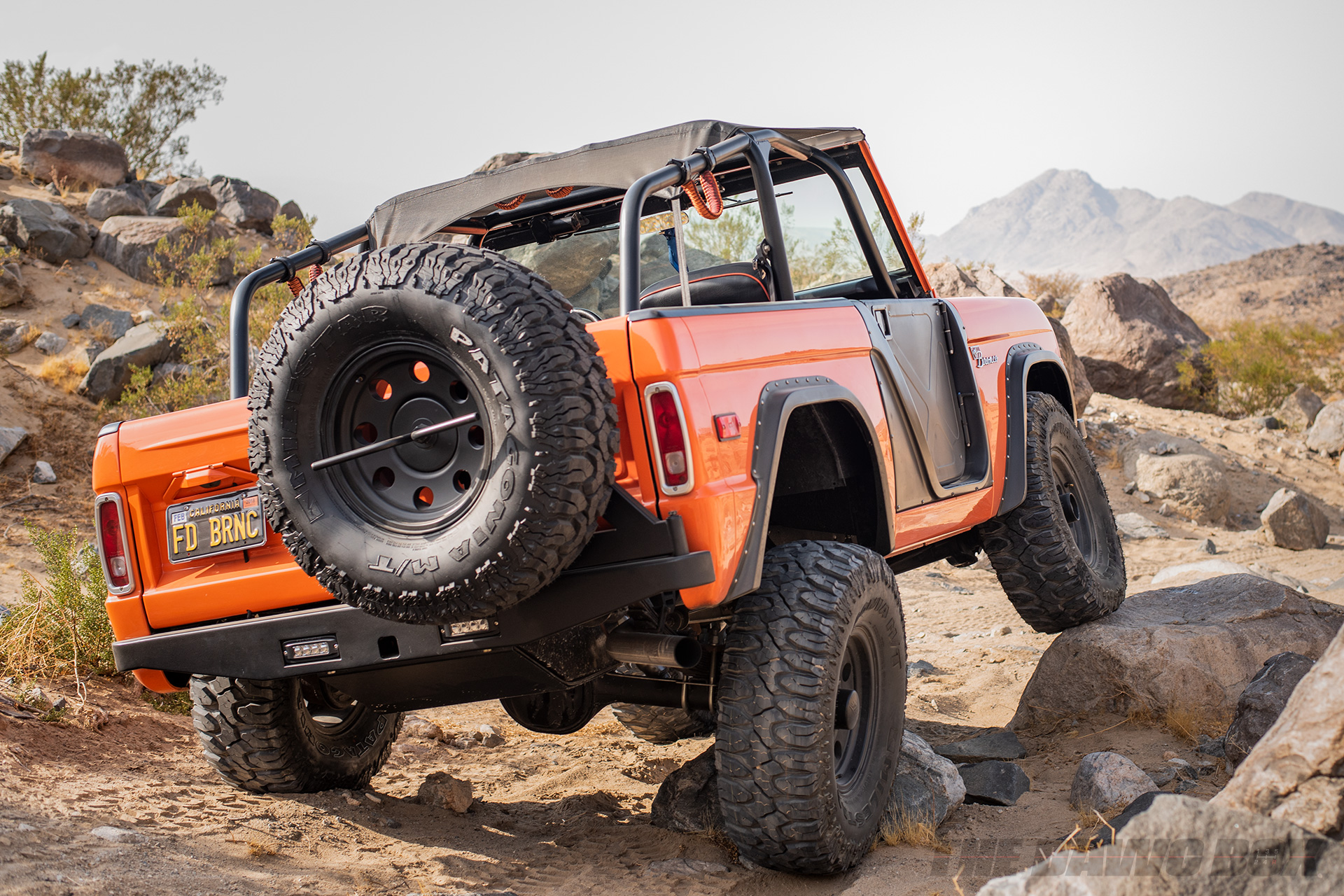 Full-size Ford Broncos are really hot right now, but the Early Model Broncos have always been highly desirable. Early Broncos bring top dollar; whether they are stock, restored, or highly modified. One Early Bronco owner is well aware of this. Bruce Winsatt had owned several full-size versions before he found this 1971 Ford Bronco early model. He was looking for a good project to undertake with his son Brandon, who was 15 years old at the time, when they found the Bronco in Pueblo, Colorado. It was a good candidate for a modified build as it was in a rather rough shape. 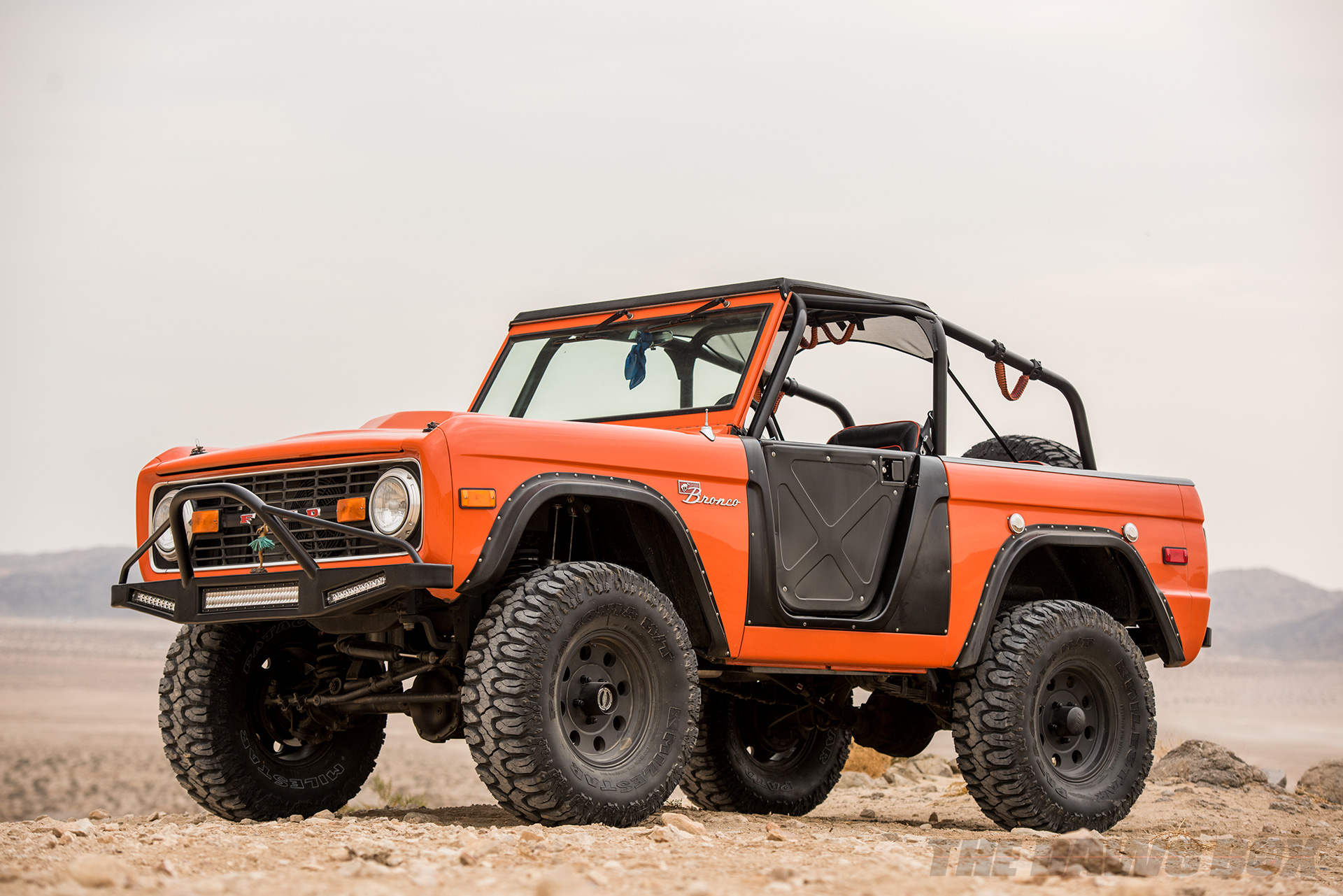 “The truck was in sad condition with a tired engine, a 3-speed transmission that too often would stick in second gear, and it had serious rust and holes in the floorboards,” says Bruce, “The rust was so bad, you could see the road go by from inside the truck. Having never taken on this level of restoration, we did a lot of research, talked to some great resources, and then jumped in with all 4 feet. We tore everything out, but in hindsight, we should have removed the body from the frame too.” 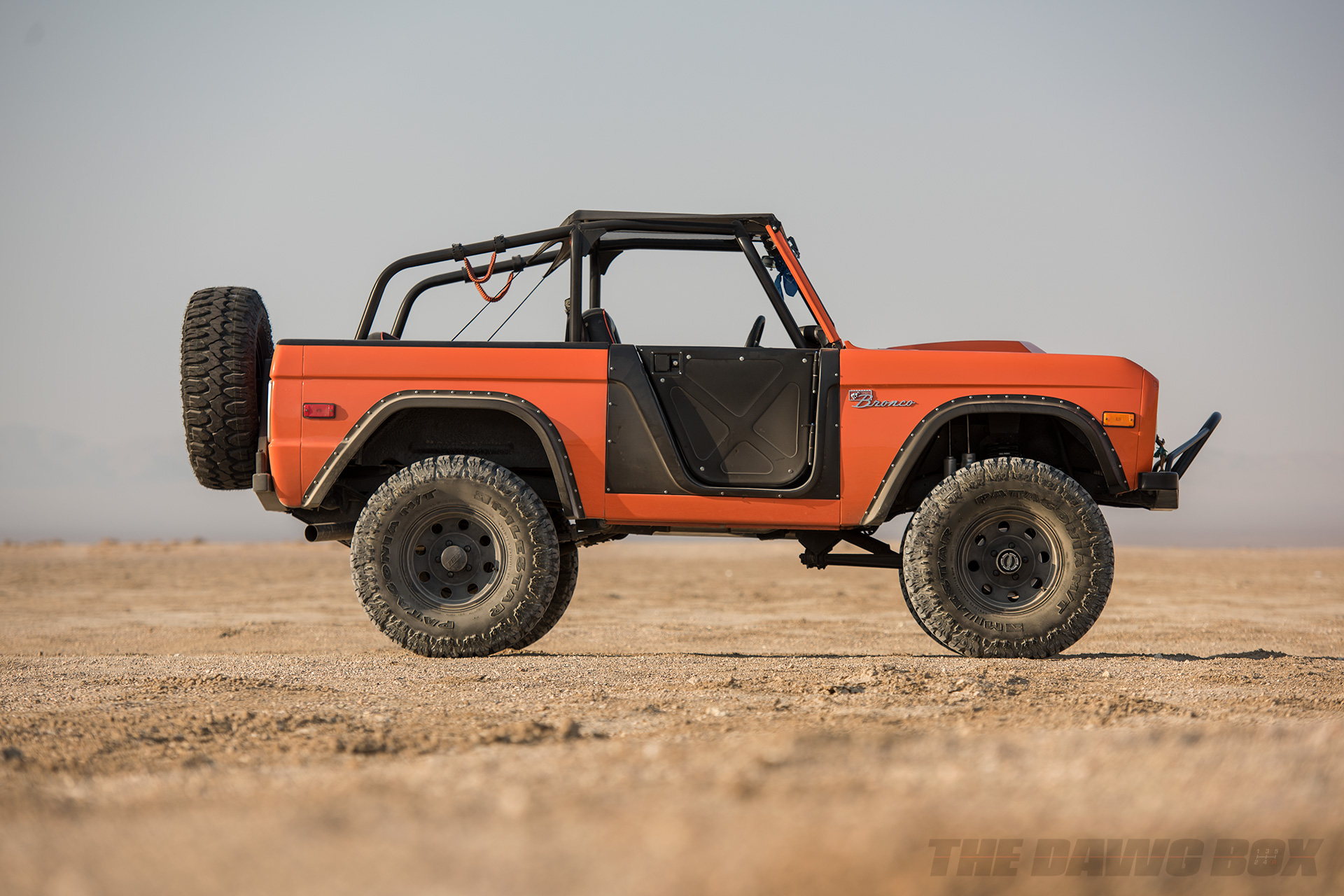 Like many automotive projects, you turn over a rock and find more rocks underneath. After the bodywork was finished, they had a big issue. After several attempts to align the doors, they discovered that like many nearly 50-year-old trucks, the frame had a twist in it. The frame was straightened, but in order to get the doors to line up, they would have to perform some serious sheet metal surgery. The custom half doors on each side solved their problem and add to the rugged look of the truck. 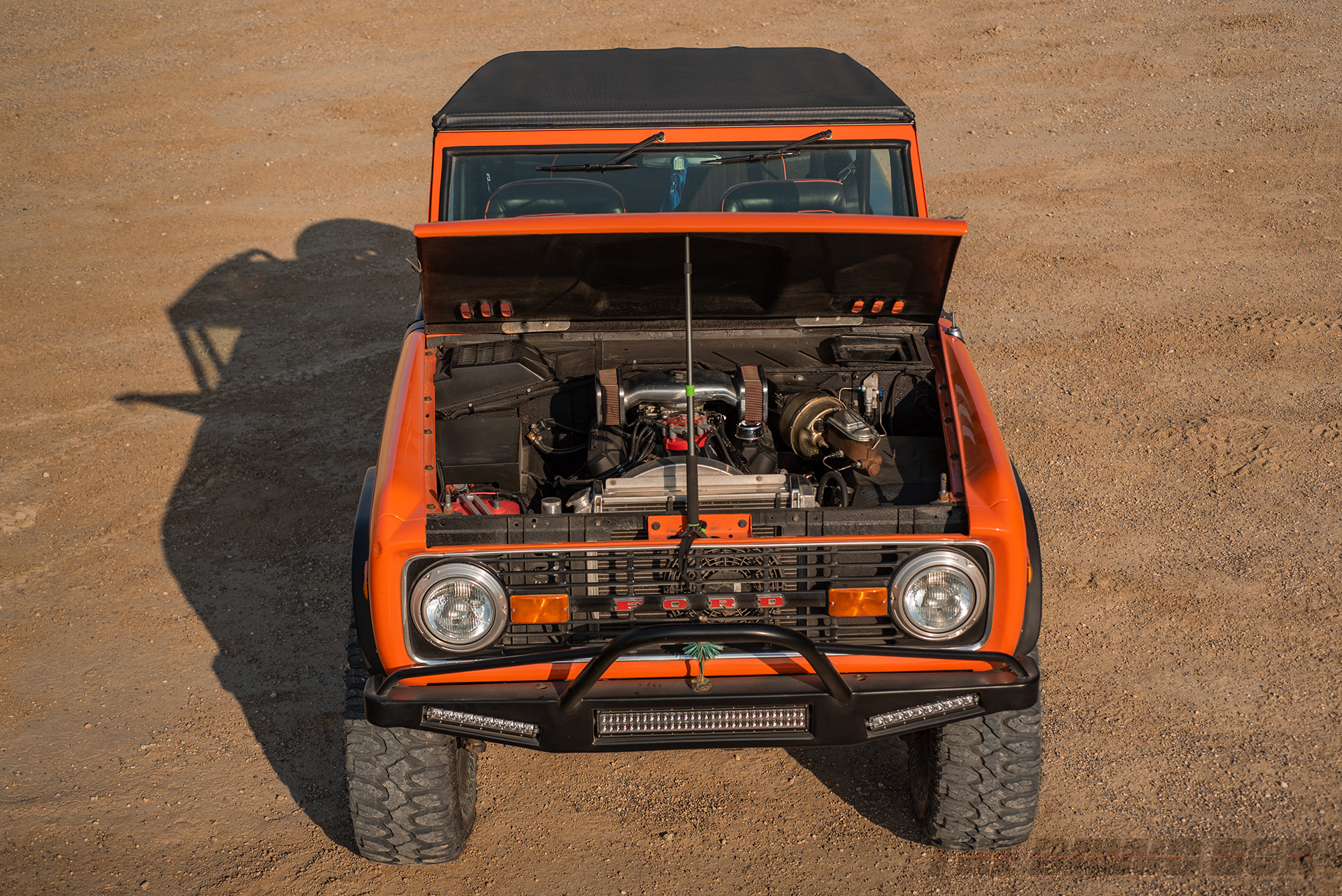 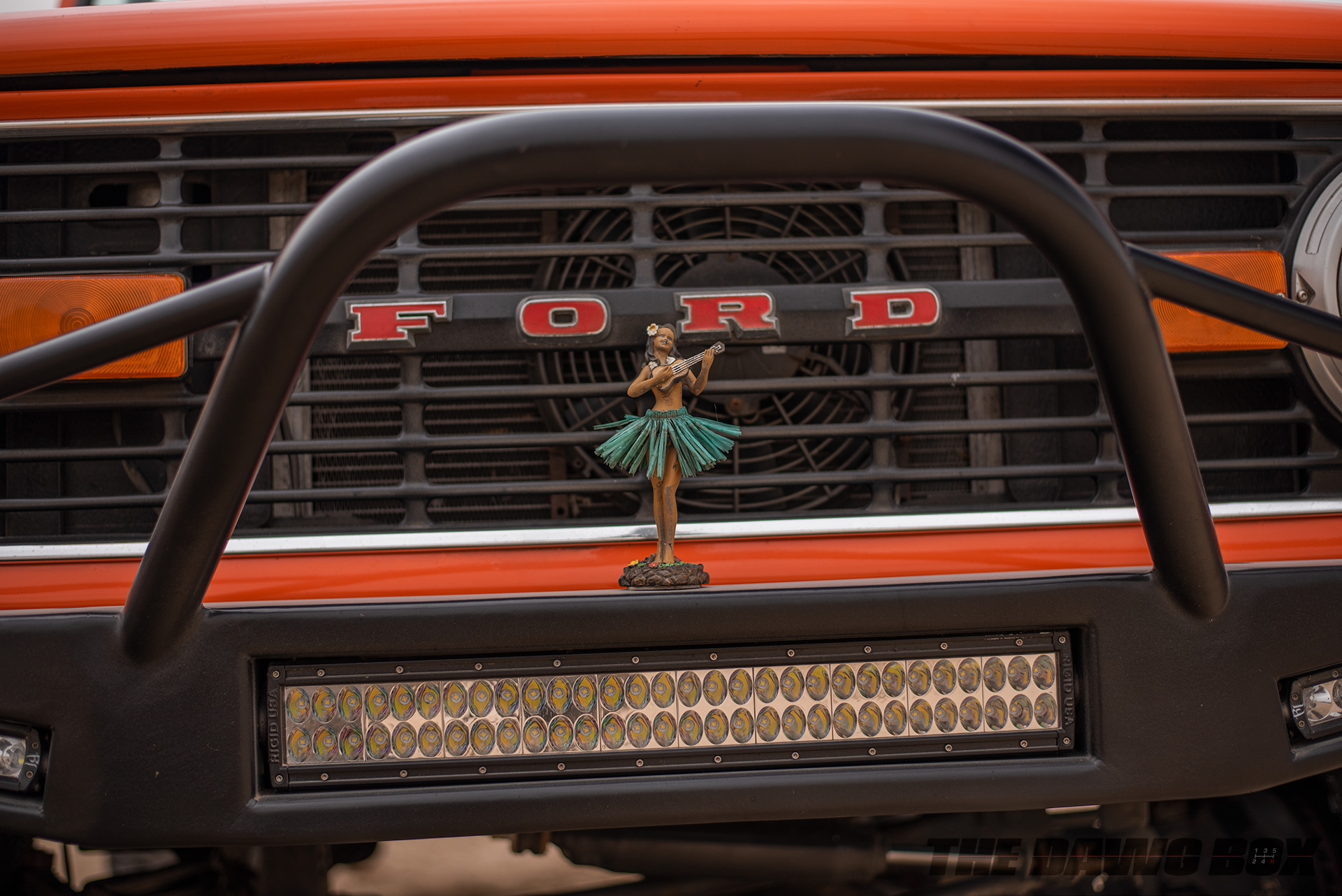 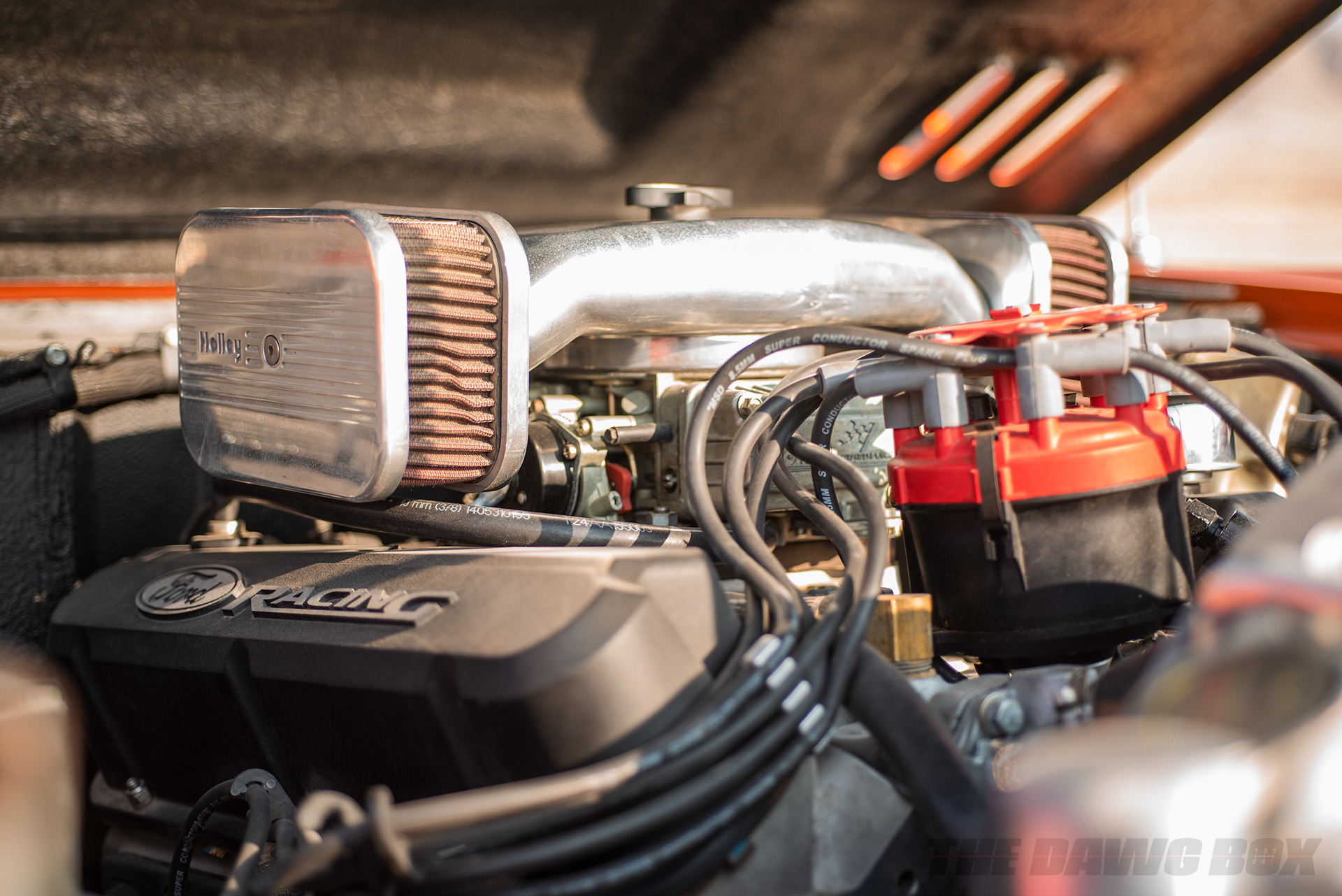 With the body sorted out and coated with Tangelo Orange paint, it was time to tackle the mechanicals. Here is where Bruce was able to pass on his knowledge to Brandon. They went through every system on the Bronco; making upgrades along the way. The front drum brakes were swapped out for discs, the brake booster was upgraded, and the entire system was redone with new hydraulic lines. The electrical wiring is all new too with the aid of a Painless Performance harness. The stock 302 engine was stroked to 347 cubic inches and puts out 400 horsepower. Mixing the fuel is a Holley 650 carb sitting on top of the Edelbrock aluminum intake manifold, and an MSD ignition lights the fire. Spent gasses are expelled out the back through a custom exhaust system. The cooling system was designed by Any Radiator in Lake Havasu City, AZ. These early Broncos are known for cooling issues and the system that Any Radiator has designed keeps the healthy V8 cool, even on the most challenging trails. All that power goes through an NP435 4-speed manual transmission with a Gear Banger shifter system. A Wild Horses 3.5-inch lift kit with Rancho 9000XL shocks allow the truck to handle extreme terrain whether they are slow speed crawling, or blazing across the desert. The suspension is further enhanced with a set of 35-inch Milestar Patagonia M/T tires. The Patagonia tires are equally at home in the rocks and in the desert. All the fun begins when you twist the Warn locking hubs, and shift into 4-wheel drive. 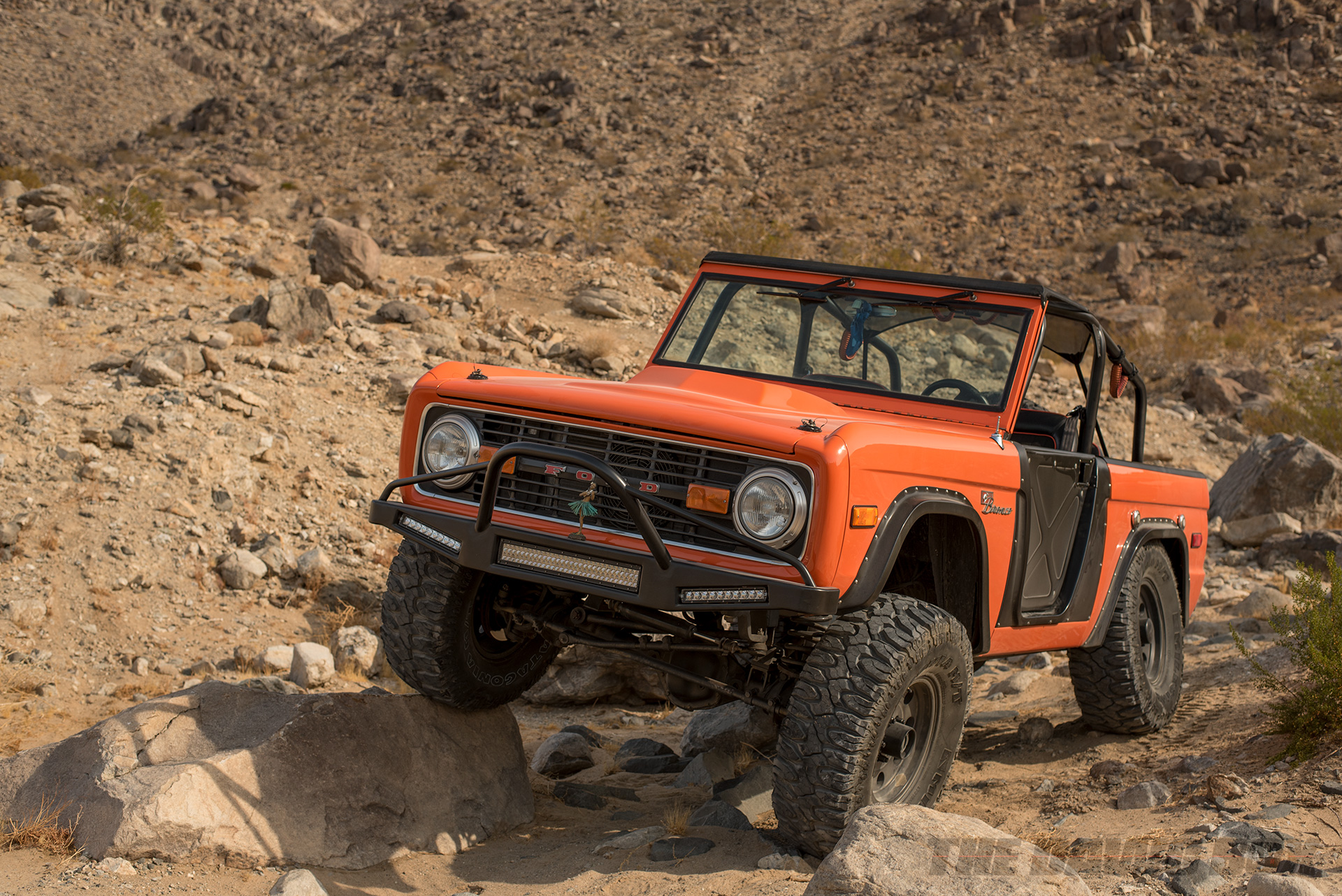 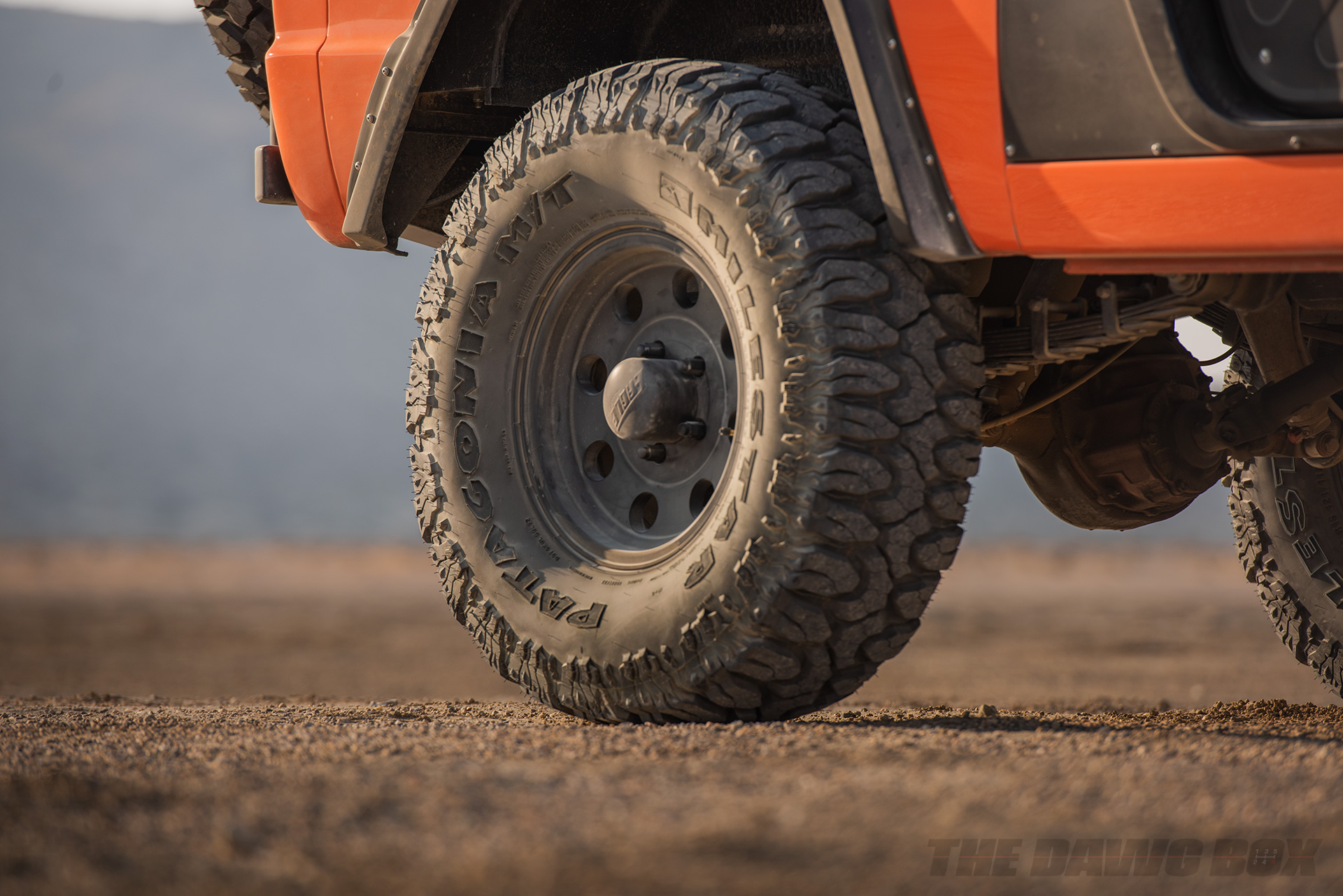 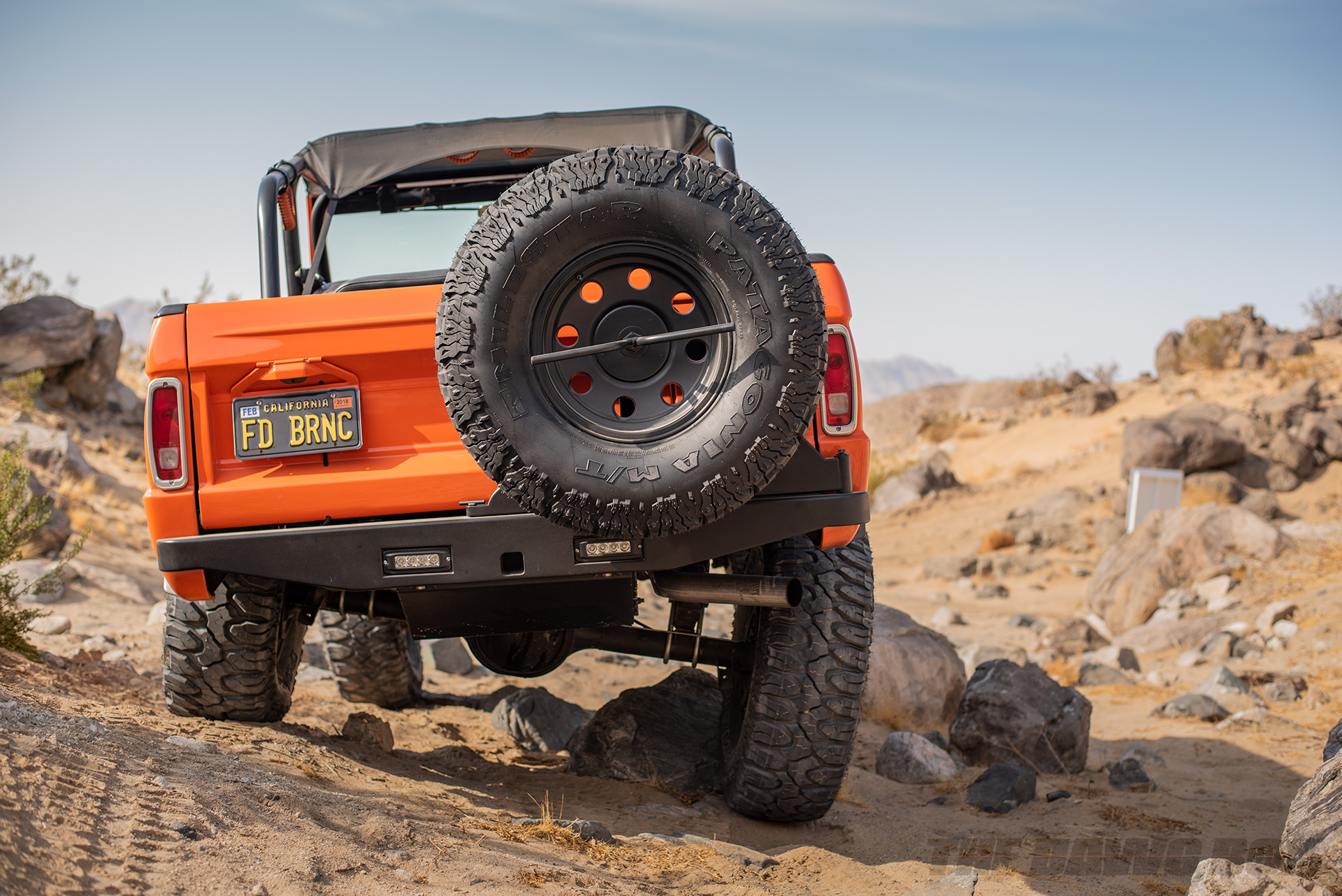 With the mechanicals wrapped up, there was still plenty to do. The bulged fiberglass hood, held down in front by hood pins, is coated in Tangelo paint, but much of the Bronco is a contrasting black. The bumpers, roll cage, fender flares, wheels, doors, and front grill are all dark as night. The same is true for the interior. The seats have a custom touch that ties them together with the body; matching orange piping. The custom roll cage and bumpers were designed with form and function in mind. The rear bumper includes a spare tire mount and a hitch receptacle. Both front and rear custom bumpers have Rigid Industries LED light bars flush mounted into them for a clean look. 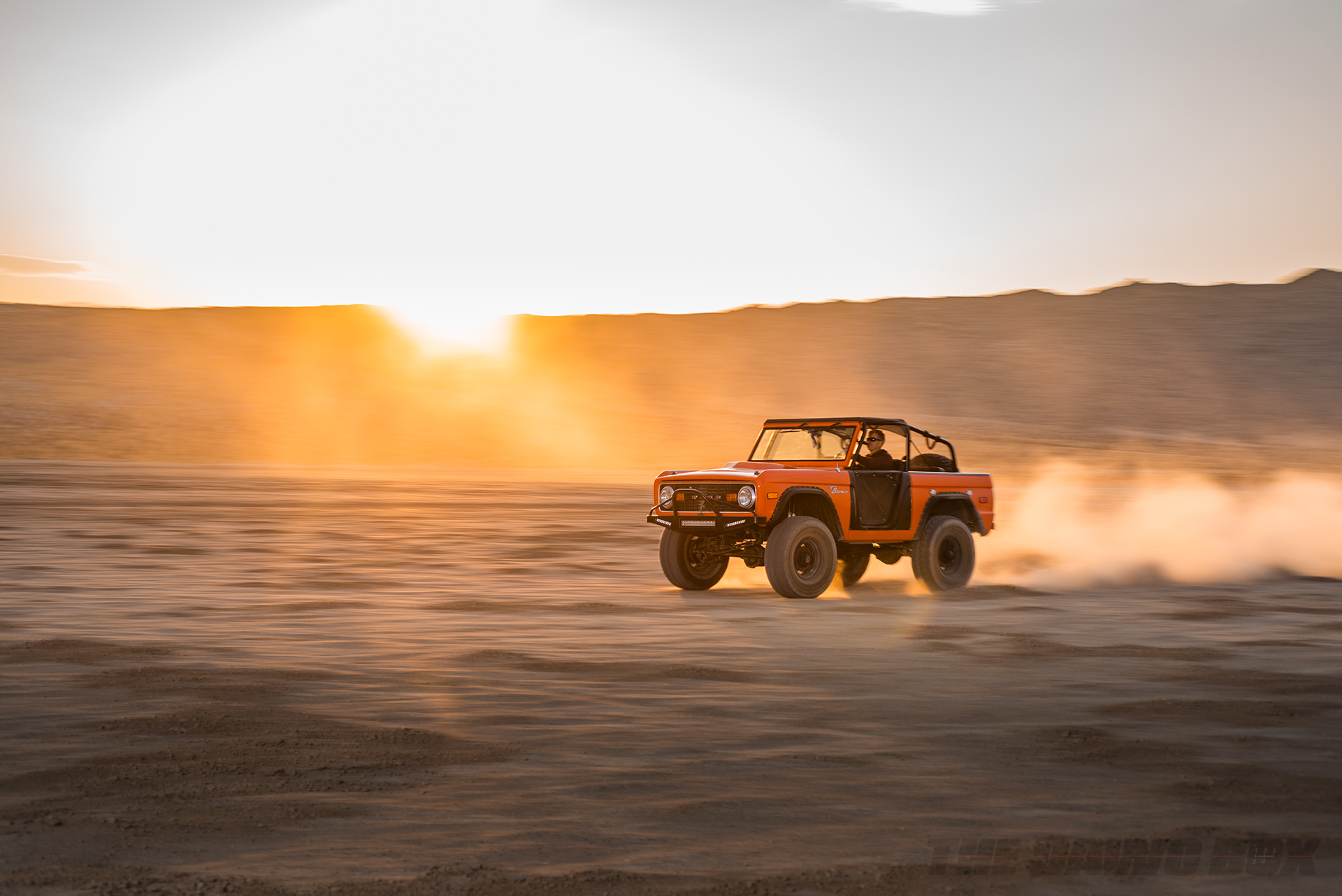 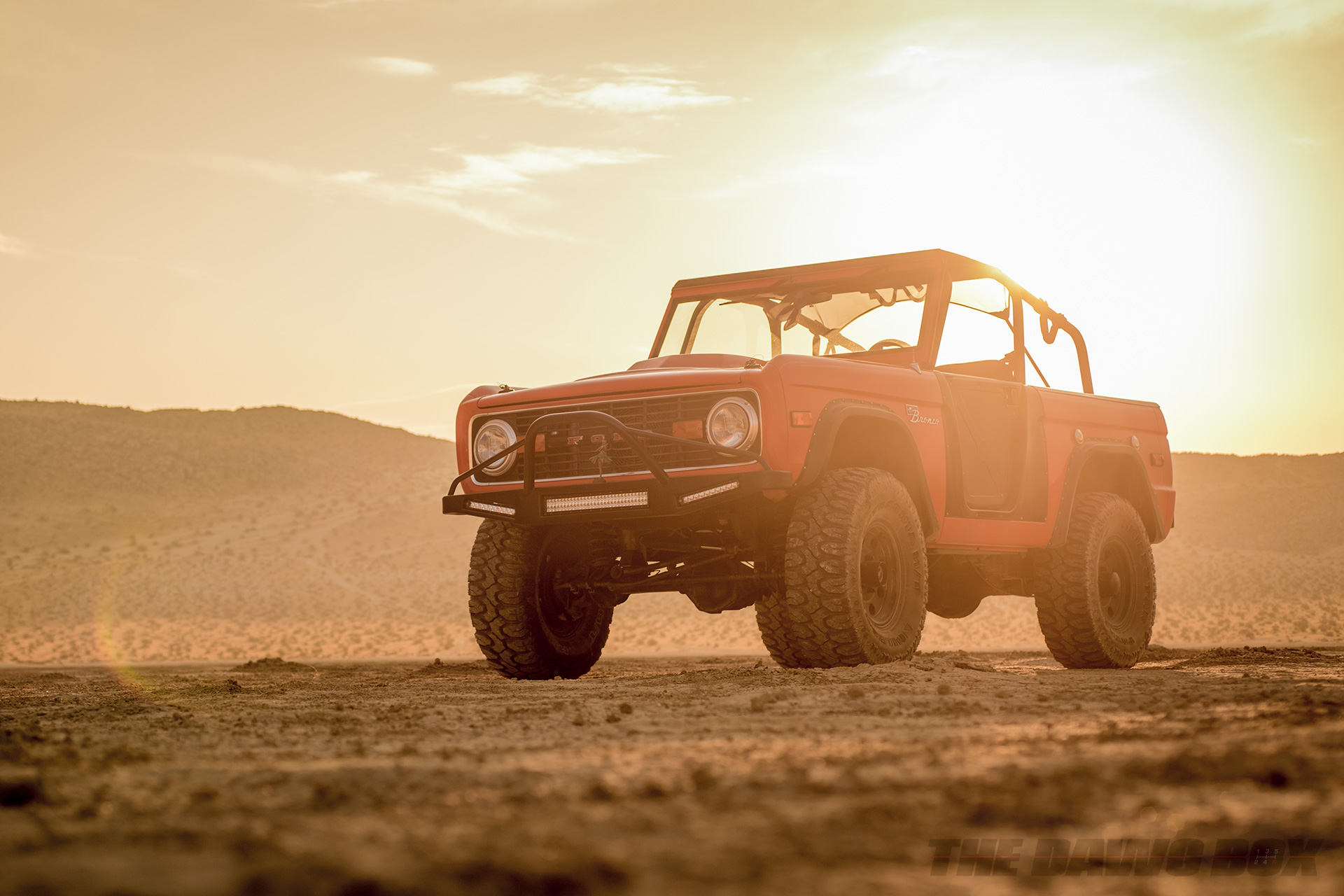 The truck is a real looker and has been a great father and son project. Brandon is now able to build and maintain his own vehicles and is currently studying at SDSU towards a degree in Mechanical Engineering.