The Blue Oval Boys Take On the Jeep Wrangler on Its Home Turf.
Do They Have the Right Formula to Unseat the King of Hardcore Off-Roading?

For the last 75 years, Jeep has been the brand to beat when it comes to street cred where the streets end. From the original civilian CJ-2A to today’s JL Wrangler, they’ve set the standard for no-compromises off-road performance straight off the showroom floor. Throughout that long, successful run they’ve faced many challengers; the Toyota Land Cruiser, the Chevy Blazer, the International Scout, and of course the Ford Bronco.

Though they all found their own fans, over the past few decades all those nameplates have fallen to the wayside, leaving only Jeep still selling vehicles that are so strongly biased in favor of all terrain performance over creature comforts and day to day practicality.

Now, Ford is poised to take a run at the Wrangler with the 2021 Bronco, which will be revealed in full to the world on Monday, June 13, 2020. This long-rumored return of a classic off-roader shows every sign of being specifically targeted at the same market segment as the JL, but can it really go toe-to-toe with Jeep’s flagship? Here’s what we know so far…

There Will Be Three Different Broncos 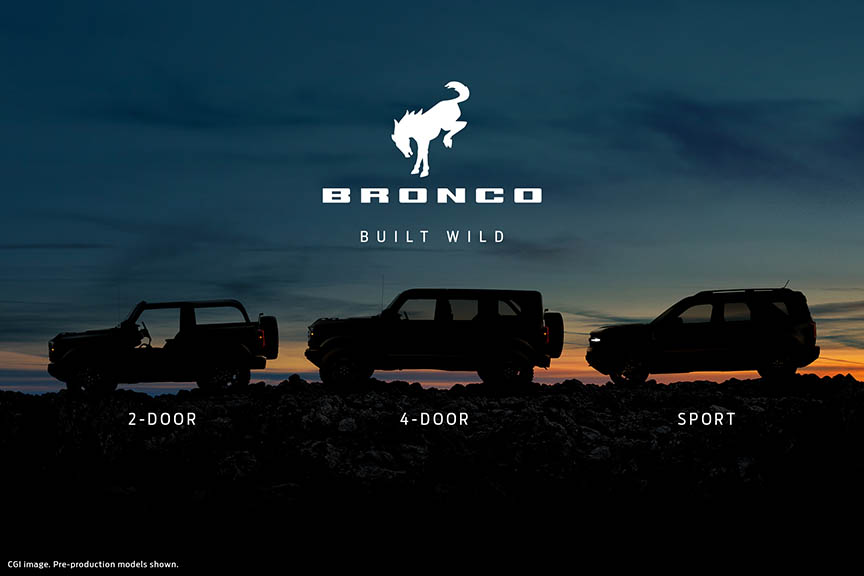 This is a mortal lock, based on what Ford has already shown us. The lineup will include a 2-door, a 4-door, and the Bronco Sport. But honestly, you can just ignore the Sport – it isn’t going to share anything but a nameplate with the “real” Bronco, and is going to be positioned as a competitor to softroaders like the Jeep Renegade, not the Wrangler. A pickup version to compete with the Jeep Gladiator is possible as a follow-on in subsequent model years, depending on how sales of that model (as well as the 2- and 4-door Bronco) pan out.

The Doors Will Be Removable (Without Tools) 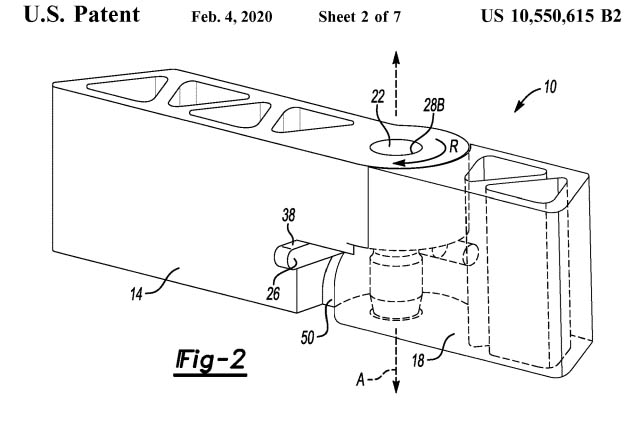 US Patent 10,550,615 B2 granted to Ford in February describes a “door hinge assembly incorporating a latch to facilitate selective door removal.” Unlike the Wrangler, it seems that the Bronco’s doors will be easy to remove and replace without needing any tools. Ford has also filed multiple patents for things like doors with separate skins that leave a side-impact protection structure in place when removed, an airbag compatible with a detachable door, and even retractable safety rails between the front and rear pillars that are either constantly in place when the doors are off, or activate automatically in the event of a crash. Ford would undoubtedly prefer for you to keep the doors on your new Bronco while driving on the road in the name of greater occupant safety (and will also certainly put a lot of warnings about it in the manual, where nobody will read them), but based on the fact that the hinge latch patent has not just been applied for but granted, that seems very likely to be incorporated at launch.

The rumor is that the Bronco will be built on the same platform as the new mid-size Ranger pickup in the same facility, and that implies a separate traditional ladder frame instead of unibody construction. That’s good news for the aftermarket, as it will allow body lifts to easily accommodate larger-diameter tire fitments without re-engineering suspension components, plus many people will prefer that design’s inherent ruggedness for serious off-roading. The Bronco will also almost certainly have a coil-sprung solid rear axle with a multi-link suspension, but unlike the Wrangler, the front suspension is going to be independent. This is a wise move for Ford; IFS is the right answer for 95% of the questions asked of the Bronco both on and off road, and they don’t have to worry about a small but extremely vocal cadre of purists raising a ruckus like Jeep will when they inevitably have to switch the Wrangler over from a solid front axle.

There Won’t Be a Traditional Transfer Case and 4-LO

This prediction is more speculative than some of the others, but images circulating on the interwebs point to a manual gearbox with a ratio labeled “C” on the shifter rather than a separate lever/button to engage low range. Ford has plenty of experience with 4WD systems, from full time to shift on the fly to manually-selectable, but this is a new twist. In addition to a ‘creeper gear’ you can also expect selectable locking for the front and center differentials, and either a limited slip or locker for the front as well.

Want a V8? That May Be a Long Wait for a Train That Doesn’t Come

Way back in the early 1990s, Ford decided that the future of their powertrains lay in the direction of smaller-displacement engines with more sophisticated designs to replace their tried-and-true pushrod V8 design. While there’s much to be said about whether overhead cam V8 engines were the right idea for their trucks as well as their passenger cars, they have remained steadfastly devoted to the idea of high technology instead of raw cubic inches.

On the dyno, either engine choice for the new Bronco absolutely murders the old SBF V8…

On the dyno, either engine choice for the new Bronco absolutely murders the old SBF V8, but buyer acceptance is going to come down to whether the market they’re trying to court (both in terms of people with fond memories of Broncos past, and would-be Jeep Wrangler owners cross-shopping) believe that a turbocharged small-displacement engine is the right solution. Engine calibration is going to make or break the success for the new Bronco among shoppers who are looking for off road competence, and the benchmark Wrangler JL offers not only a standard naturally-aspirated 3.6 liter V6 gasoline engine rated at 285/260, but an optional 2.0 liter turbo inline four with 270 horsepower and 295 pound feet, plus a turbocharged 3.0 liter EcoDiesel that delivers an estimated 260 horsepower and 442 pound-feet.

Offering a 5.0 liter gasoline V8 based off the current Coyote architecture would seem to be an attractive option for Ford, should customers desire a NA engine over the EcoBoost 4 and 6 cylinder powerplants, but considering how the wind has been blowing with their Raptor models, a hopped-up EcoBoost V6 seems more likely as a future ‘premium’ engine upgrade.

It’s Ford’s chance to show the world what they can do when they’re turned loose to compete with the current heavyweight champ.

The Devil in the Details

While we feel we are on pretty solid ground with these predictions, Ford has kept most of the details for the new Bronco very close to the vest. You can be sure that every engineering, styling, and marketing decision for the new model was vetted against the Wrangler archetype, though – the company has a clear vision of what they’re trying to accomplish with 2021 Bronco, which is something pretty rare these days when focus groups, shareholder opinions, and low-risk strategies dominate new car and truck designs. That’s what’s really exciting about the upcoming reveal. It’s Ford’s chance to show the world what they can do when they’re turned loose to compete with the current heavyweight champ.