What’s Not to Love?

If you’re like me, you often wonder at the origins of car names, until that is, the proliferation of alphanumeric nomenclature. But what of names like the VW Rabbit or the Beetle or the Chevrolet Impala? We know what a Rabbit and a Beetle are, but what’s a Chevy Impala? It’s actually a medium-sized antelope found in eastern and southern Africa that can run at 50 mph, however, in “Carland” it’s possibly the most popular Chevy brand of all time. 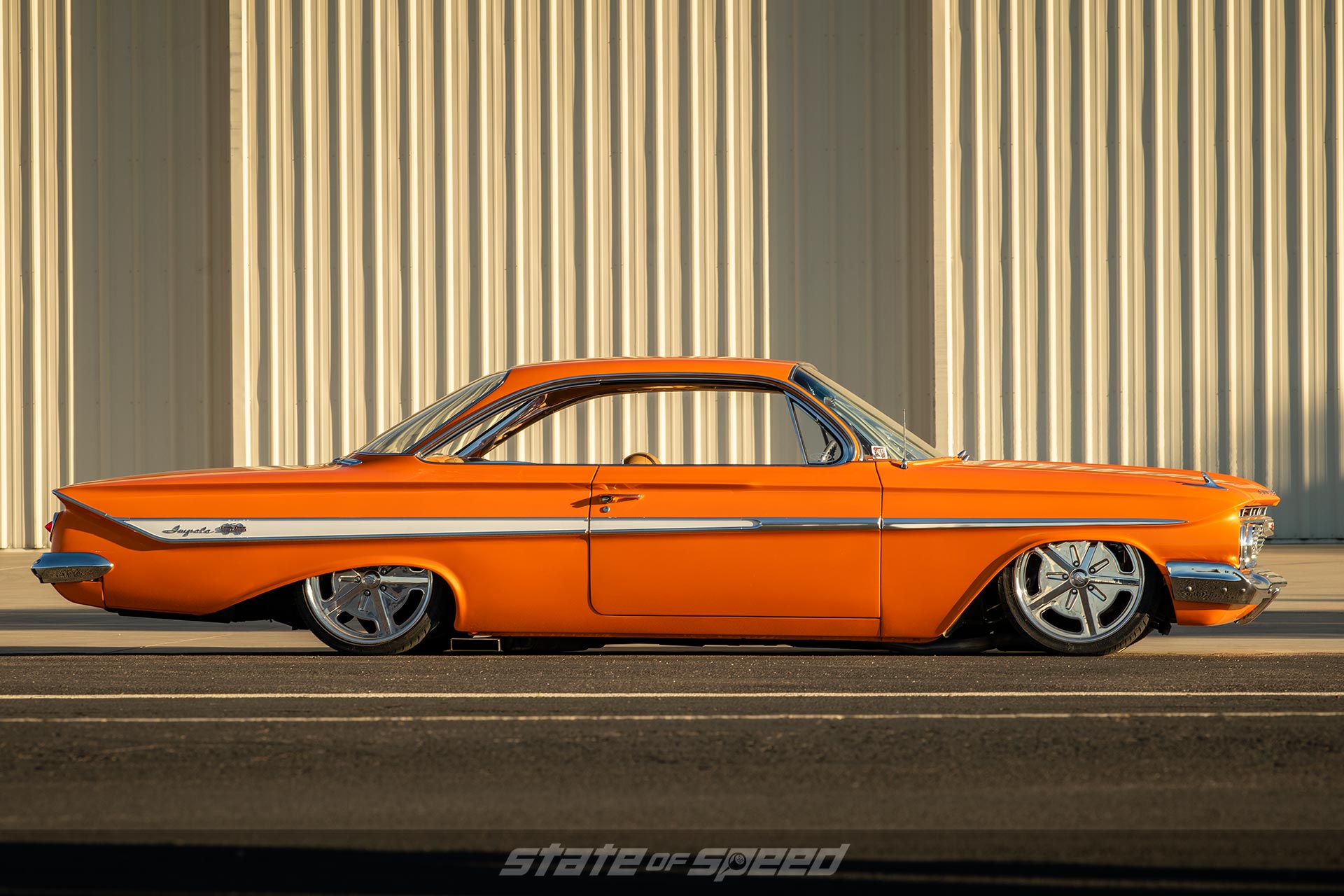 Introduced for the first time in 1958, the Chevy Impala came in a year when people were campaigning for nuclear disarmament; Elvis was called up into the Army and shipped to Germany. The big chart success that year in the U.S. was “At the Hop” by Danny and the Juniors that summarized the excitement coursing through American teenage life: Cruisin’ Main Street on the weekend, drinking root beer at an A&W, or eating popcorn at the drive-in; it was West Side Story on wheels and for them the Cold War was conducted on the back seat of a car—and what better car than the all-new Impala.

This era was immortalized in George “Star Wars” Lucas’ seminal 1973 movie American Graffiti that depicts a night in 1962 when kids cruise the streets before going off to college. Graduating senior Steve Bolander, played by Ron Howard, memorably loans his precious ’58 Impala to Charles Martin Smith’s character “Terry the Toad.” “When I was growing up, it was all about that car,” said NASCAR personality Ray Evernham, who recently restored the original movie car.

It was Chevrolet’s 50th birthday and the theme for the year was “Forward from Fifty.” To mark the occasion they had a complete redesign, and with performance de-emphasized, as a result of the 1957 racing ban, everything was lower, wider, and nine inches long. These cars were cruisers from the quad lamps to their gull-wings, with plenty of chrome in between. Chevy promised “the road smoothest, nerve-soothing ride imaginable,” and in doing so, entered the “boat race” to build ever-bigger cars.

“When I was growing up, it was all about that car.”Ray Evernham, NASCAR Personality

The automotive world was first introduced to the Impala under the Corvette brand in 1956 when GM unveiled a plastic-bodied, five-passenger, two-door sedan in the General Motors Motorama. This XP-100 “dream car” was a “big” Corvette with an emphasis on safety and sparing use of chrome, although that giant toothy grille belies that statement. Thankfully, it didn’t make it to production.

The production Impala for ’58 was more a progression from the ’57 Chevy, however, it was longer, lower, and wider. It was the first with dual headlights; the sharp fins of the previous year were now less aggressive and more sculptured, and to distinguish it from other models it had triple symmetrical taillights. 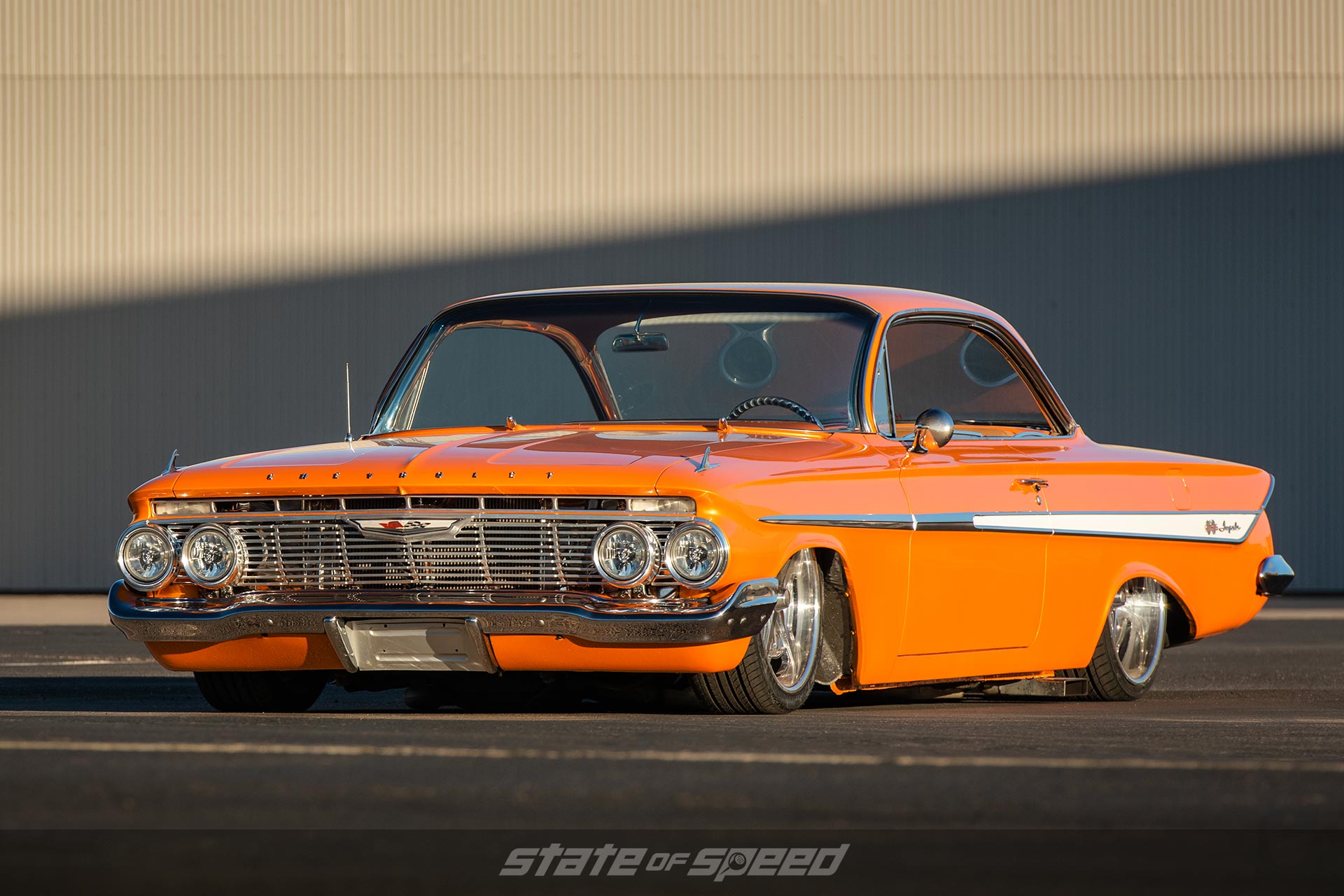 The Chevy Impala immediately found a place in the hearts of Americans that was cemented when Chevy introduced the Super Sport (SS) to the market in 1961. The SS package was available on any Impala, including sedans and station wagons, and the power was increased with the 425 hp 409 ci V8 immortalized in the 1962 Beach Boys song 409.

Unfortunately, as often happens, the Impala and even the SS badges were affixed to some less than desirable automobiles; and while Chevy Impala remained Chevy’s best-selling model, the cars got bigger and the ’71 was the largest car Chevrolet ever offered. Newly introduced safety requirements increased the weight until sports models resembled Sumo wrestlers rather than sprinters.

The Impala immediately found a place in the hearts of Americans that was cemented when Chevy introduced the Super Sport (SS) to the market in 1961.

Eventually, in 1985, the nameplate was dropped, that is until 1992 when GM designer Jon Moss hot rodded a Chevy Caprice for the Detroit Auto Show. The four-door Caprice was a land yacht but Moss made it cool by lowering it two inches and throwing in an 8.2L 500 ci engine.

The Impala SS was an instant hit and went into production February 14, 1994, initially available only in black with a grey interior. It used the police 9C1 package including sport-tuned suspension, reinforced shocks and springs, a high-capacity reverse-flow cooling system and four-wheel disc brakes. In place of Moss’s 500 inches, Chevy installed a re-tuned 5.7L Corvette LT1 350 that made 260 hp and 330 lb-ft of torque. The big difference between the Corvette LT1 and the Impala LT1 was that the latter had iron rather than aluminum cylinder heads. It went zero to 60 mph in seven seconds which was not bad for a big car weighing in at 4,036 lbs—the cognoscenti loved it as did celebrities: you can count comedian Tim Allen, Billy F Gibbons of ZZ Top, Dexter Holland of Offspring, Jimmie Vaughan and many others as Impala owners.

The Impala has also inspired designers. For example, check out Thom Taylor’s Caprice wagon that he customized to represent a nineties version of a classic sixties Impala wagon. The old adage says: Build it and they will come, and it certainly applies to Chevy’s Impala.