Over the last several years, the father and son team of Derrick and Riley Hodson of Las Vegas’ Hodson Motors have become synonymous with creating functional works of art from formerly ignored and often abused classic workhorse truck foundations. Combining body parts from light, medium, and heavy-duty trucks and blending them in such a way that is easily overlooked as stock by the casual observer, the team have developed a formula that has proven hard to beat. Their latest is a 1968 Dodge W300 Crew Cab that has taken their build style and pushed it to a whole new level.

Instead of starting from scratch on this project, the Hodson’s started with a partially finished project that the former owner had already invested a considerable amount of time and effort into, creating a solid drivetrain as the foundation to build off of. Starting with a rare 1968 Dodge W200 ¾ ton Crew Cab truck, the former owner installed an early Superduty Dana 60/ Sterling 10.5 axle combo slung on the same era Superduty leaf spring suspension, utilizing custom mounts front and rear. Under the hood he installed a tried and true 5.9L 12 valve Cummins mated to an NV4500 and a divorced NP205 transfer case. It was at this point that Riley purchased the project.

…A combination of utilitarian and creature comforts were seamlessly blended to create a relatively subtle yet comfortable driving experience...

With a solid foundation, the team could focus on making the Dodge W300 theirs. The first step was to swap the manual 5spd for a 6spd Allison 2000 automatic transmission. They also chose to upgrade the axles with 5.13 gearing, to smooth out the ride with a set of smooth body FOX remote revisor shocks, and to improve the ease of steering with the addition of a PSC hydro-assist to complement the Superduty power steering box. The last step on the drivetrain was to install a set of custom traction bars on the rear axle. 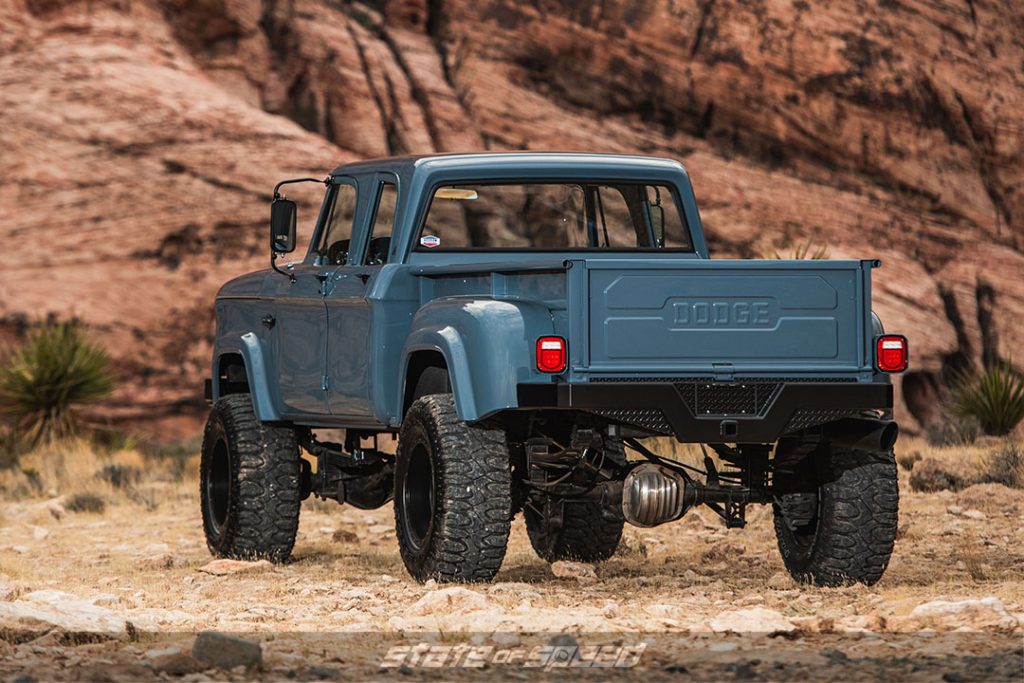 With the drivetrain where they wanted it, the next step was transforming the body. Starting up front, a dual headlight 1964 D300 grille and core support were put in place of the single headlight ‘68 unit. The core support swap required fabrication of a custom aluminum radiator and charge cooler to keep the 5.9L happy. Moving on to the front fenders, the team really started to apply their signature formula. A set of W300 fenders were installed but not before being heavily massaged. The W300 fenders had the factory heavy duty “flare” they were looking for, but the wheel opening was just too small to fit the large diameter tires they were planning to install. To remedy this, two fenders per side were cut and spliced together in order to enlarge the opening an additional 2 inches. The next step was to replace the factory Swepside bed with a Utiline model. In true Hodson fashion, the bed was not left alone. In order to get the look they were after, the 9-foot bed was shortened to get the proper proportions. Before the fenders were reinstalled, they received another set of W300 front fender flares grafted onto the wheel openings, as well as an additional 3 inches added to the width. 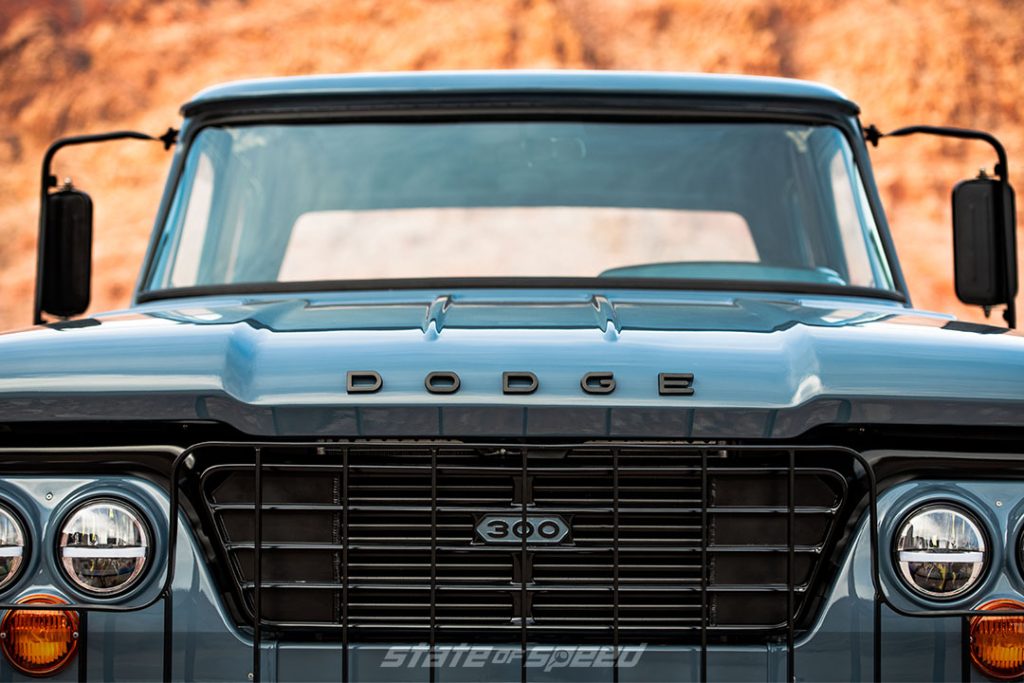 With the major body modifications complete the truck was dropped off at Nefarious Kustoms of Las Vegas, NV, for finish body work and a smooth coat of Dodge Ceramic Blue paint. To finish off the body, all the factory emblems and trim, including the “West Coast” style rearview mirrors, were cleaned up before they received a satin black finish. Other notable features on the exterior are the custom tail light surrounds, AMP Research retractable steps and full LED lighting. The final touch was to fabricate a custom set of matching heavy-duty bumpers. To create the front, Riley started with some heavy wall square tube that he cut and welded to mimic the shape of a factory bumper. On top of this he attached the factory grille guard off a 1964 Power Wagon. Then to finish off the look he was going for, he cut and blended three separate lower front aprons from some donor 1968 D300’s before mounting them to the bottom of the bumper. The same size square tube was utilized to create a wrap around, drop center rear bumper. 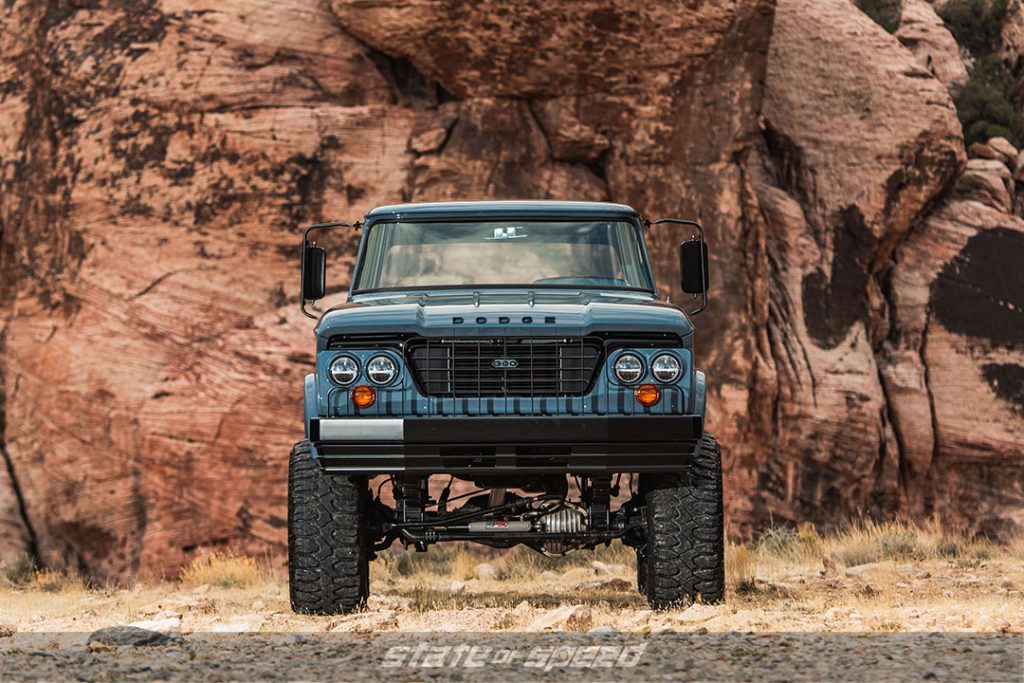 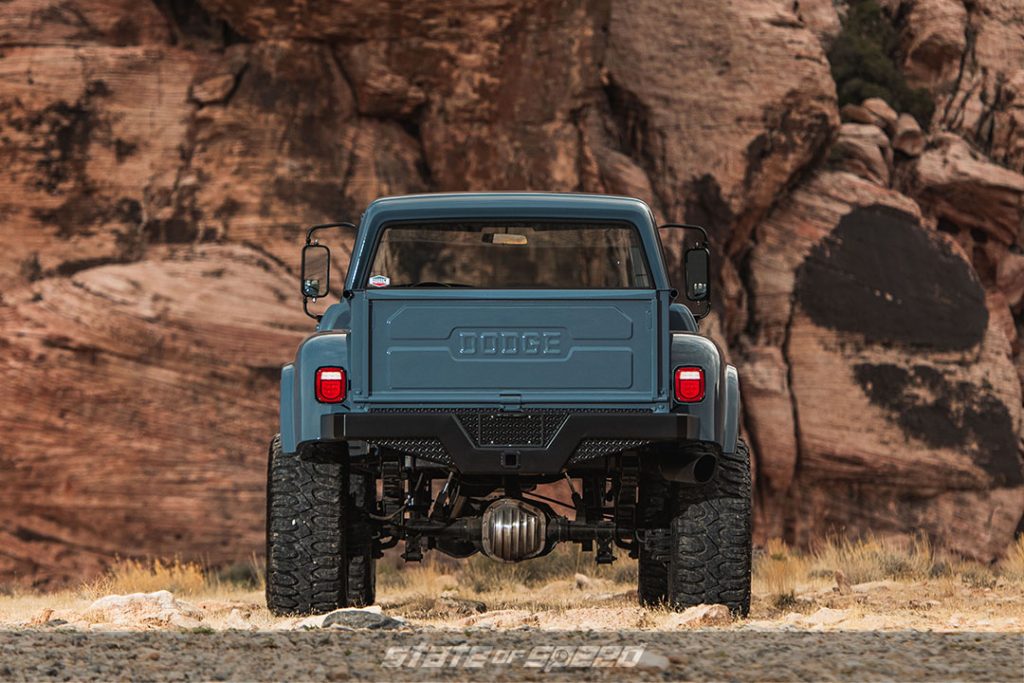 To further set the Dodge W300 Crew Cab apart, the interior was addressed. A combination of utilitarian and creature comforts were seamlessly blended to create a relatively subtle yet comfortable driving experience. First up a set of Dakota Digital gages were mounted into the factory instrument cluster. The dash was further modified with the installation of a touch screen head-unit and Vintage Air HVAC vents and controls. The doors received a set of New Relics power windows along with custom door panel inserts. To finish off the interior, the truck was dropped off at Ian’s Auto Interiors of Las Vegas where a custom black carpet was made to cover the floors before the front and rear bench seats, custom door panels, and headliner inserts were encased in a subtle, distressed natural leather. A matching leather wrapped steering wheel points the direction, and a Lokar tap shifter was installed to control the gear selection. One of the final touches to the interior was to modify the factory dash mounted transmission shifter to now control the position selection for the NP205 transfer case. 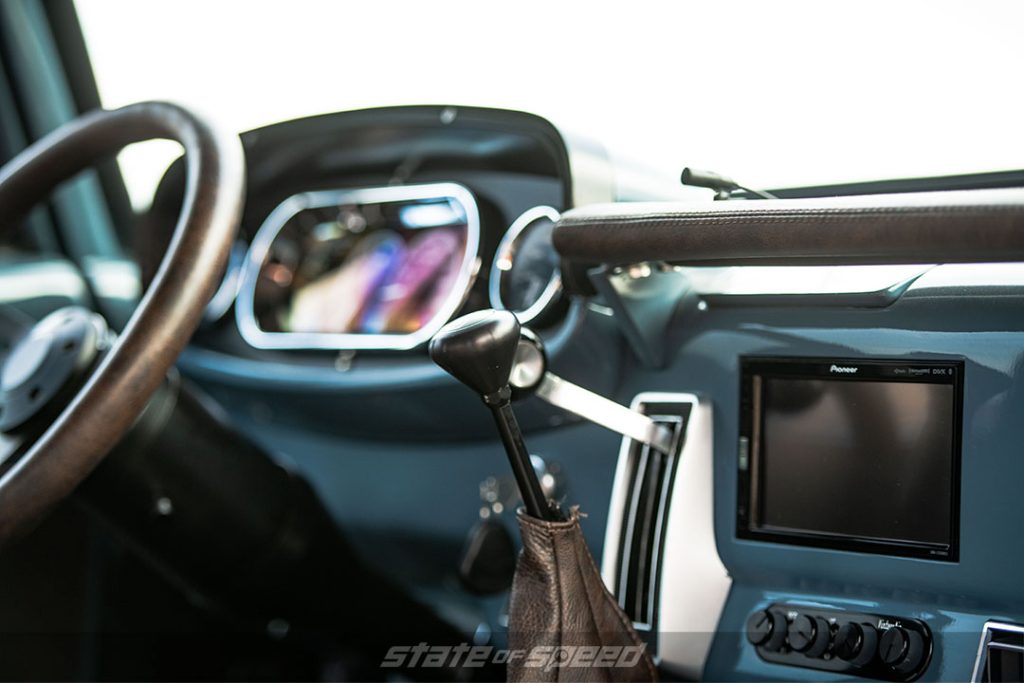 With everything finally falling into place, the final touch was to install the 38×15.5R20LT Milestar Patagonia MT tires wrapped around a set of 20×12 XD Panzer wheels.

While the team at Hodson Motors has developed an unbeatable formula for building beautiful one-off trucks that blur the line between full custom show trucks and their hard-working brethren, the one thing you can always count on is that their trucks will not only be 100% fully functional, they will also always be used. These trucks are built to be driven and driven they are. Since completion, the Dodge W300 has not only spent time in the lime light, it has been driven thousands of miles and used as a truck is supposed to be used. 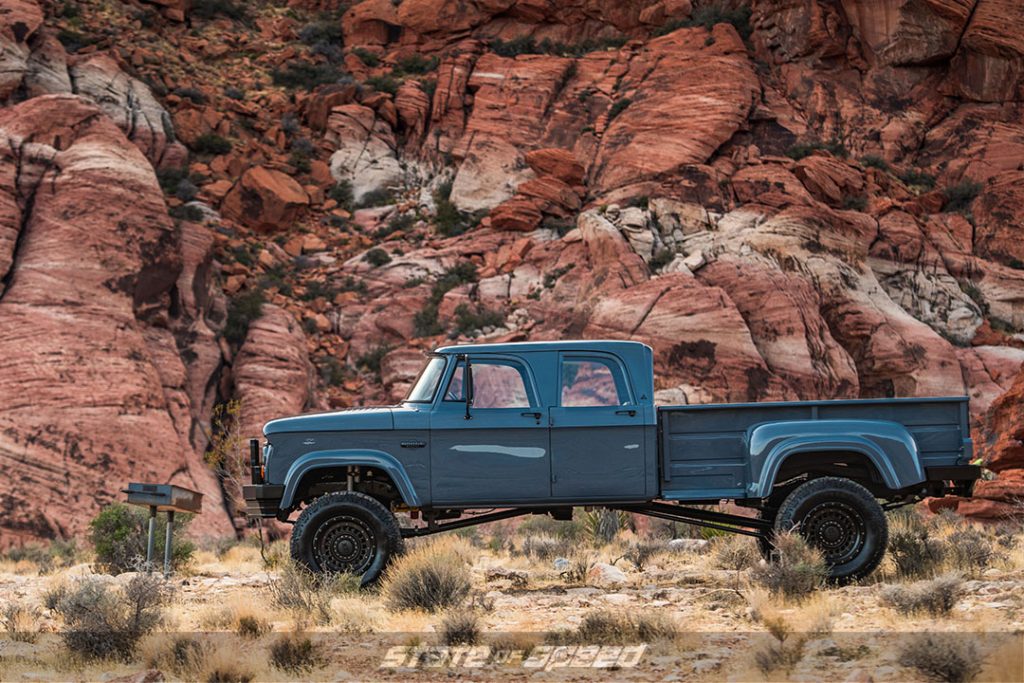