Everything You Need to Know About Exhaust

One of the most popular upgrades for any performance vehicle, from V8 Mustangs, Camaros, and Challengers through pickups and SUVs to “tuner” turbo cars is an aftermarket exhaust. Considering how common it is for owners to discard the factory pipes in favor of something different, we’re going to take a look (and listen) to the basics of exhaust systems from start to finish to highlight what you need to know. Whether you are looking for more horsepower, a better sound, or both, your bank balance and your neighbors will thank you for educating yourself before you strap on a new aftermarket exhaust.

An exhaust system has to achieve a few primary functions – First (and most importantly from a performance standpoint), it has to efficiently move spent gasses away from the combustion chamber to allow room for a fresh charge of air and fuel to enter for the next power cycle. Second, it has to move those gasses to someplace that won’t dump a lot of waste heat in the engine compartment (Fun Fact: 40% or more of the heat generated during a car engine’s operation ends up going out through the exhaust) or asphyxiate the driver and passengers. Third, except for pure competition applications, it has to moderate the volume and sound quality of the exhaust noise. Finally, in modern OEM applications, it has to incorporate emission control systems to reduce the amount of pollutants released by the exhaust.

Understanding these functions is the key to understanding why factory exhaust systems are built the way they are, and knowing what the tradeoffs involved in modifying your exhaust will be. Let’s follow the path of a puff of exhaust from the cylinder to the tailpipe to see how all the components involved contribute to the process. 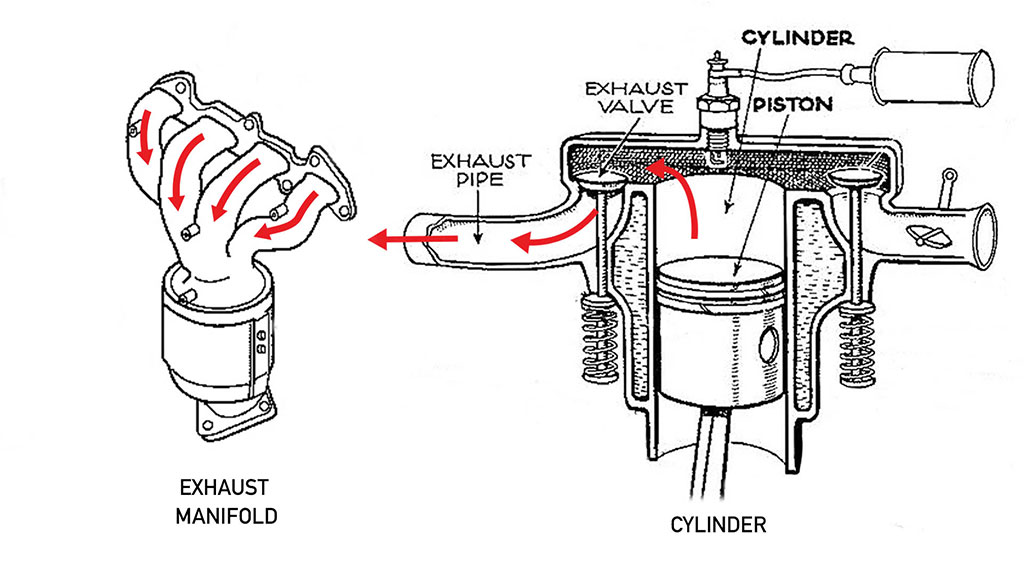 When the exhaust valve opens, hot, energetic, pressurized, but diffuse waste gas exits the cylinder and travels through the exhaust port and out of the cylinder head. Each cylinder has its own port, and those outlets are connected to each other by a manifold. In most OEM designs that manifold is made out of cast iron, which is a good choice for durability and keeping the overall size of the engine package small, but it can come with a performance penalty. To keep things compact, the manifold may have runners for each individual cylinder that are different lengths or even different diameters, and this offers performance part makers their first opportunity to find a few extra horsepower.

A manifold made of tubular steel, referred to as a header, is a common performance upgrade. Individual runners, called “primary tubes”, carry exhaust gasses to a collector where the output of several cylinders combines into a single stream. The collector does a couple of things besides just simplifying the plumbing from that point on – it reflects pressure waves along the primary tubes back to the cylinder head, and it lets each cylinder “talk” to each other. By carefully designing the length of the primary tubes and the volume of the collector, a good header can actually flow more efficiently than an exhaust port that’s open to the outside world by letting the waves of high and low pressure work together from cylinder to cylinder to actively scavenge exhaust gas in the engine’s main operating RPM range.

Current state-of-the-art engine designs often make things difficult for anyone trying to build performance headers; because of ever-increasing emissions standards, it’s very common to have a catalytic converter built into the factory exhaust manifold so that it gets up to operating temperature as quickly as possible to reduce the amount of pollution during a cold start. Some engine designs even combine all the exhaust runners into the cylinder head itself, eliminating the manifold entirely. And in the case of turbocharged engines, the cast exhaust manifold is usually (but not always) also the mounting point for the turbo. All of these factors will determine whether a performance header is a worthwhile upgrade, or indeed even an engineering possibility, for your particular application.

Speaking of turbos, you’ll frequently see a component called the downpipe listed as a performance upgrade. This particular piece of exhaust plumbing connects the outlet of the turbine section to the down-stream parts of the system, and in some factory engine designs it’s a well-known bottleneck for exhaust flow. Turbochargers like having as little restriction at the outlet of the turbine as possible; this is what lets them extract energy from the exhaust and use it to spin the compressor on the intake side. A well-designed aftermarket downpipe can increase horsepower throughout the RPM range as well as reducing boost lag. 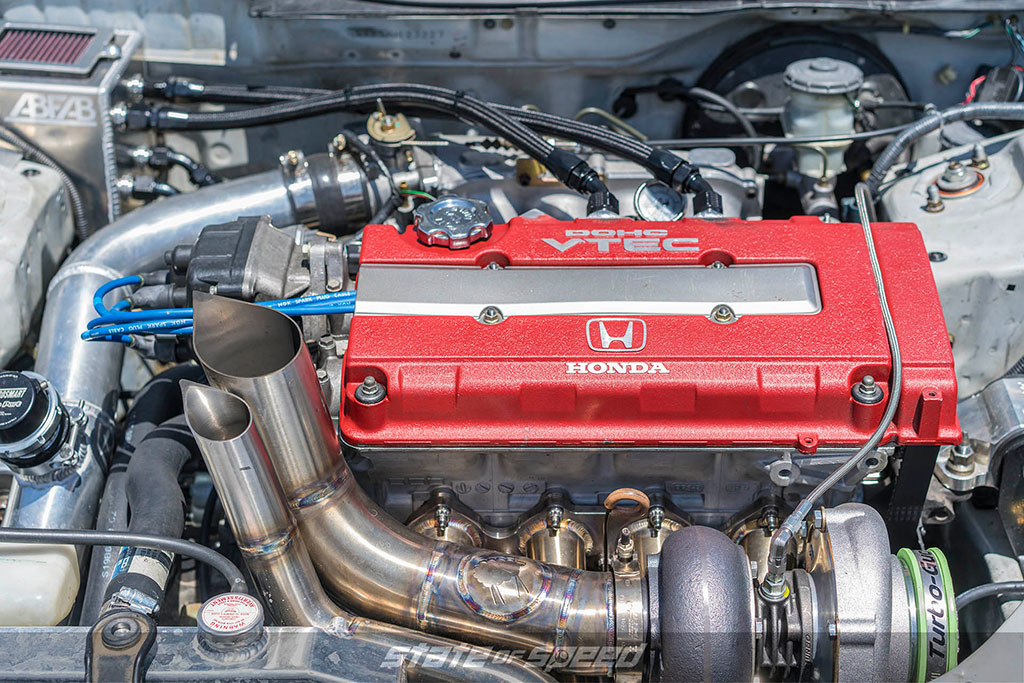 For both forced-induction and naturally-aspirated OEM engines, the next stop is usually the main catalytic converter(s). In V6 and V8 RWD cars, they’re often incorporated into an X-, H-, or Y-pipe, while inline engines with a single header have a simple section of exhaust pipe that incorporates this emission control device. Back when catalytic converters first became necessary in order to meet tailpipe pollution standards, they posed a serious obstacle to performance, causing a major restriction to exhaust flow that the engine had to fight. Today, both factory and aftermarket catalysts take a very minimal toll on horsepower, and depending on how aggressively emissions laws are enforced in your neck of the woods, removing or defeating them can be very expensive if you happen to get caught. Ultimately it’s between you and your conscience if you decide to roll the dice, but the performance penalty for a catalyst-equipped exhaust is much lower than it was back in the day.

You’ll often see variations on the term “cat-back” in aftermarket exhaust descriptions – this usually means the system has no effect on emission controls and is legit in all 50 states (at least from a pollution perspective). Factory exhausts need to meet specific sound level limits, as well as being durable enough to not wear out during the car’s warranty period even in salt-encrusted rust belt states, while being as inexpensive as possible. A good aftermarket cat-back system will offer superior materials and construction – typically stainless steel – while being lighter than the OEM exhaust, and if it’s particularly well designed (and the factory system is particularly bad) it may even increase horsepower and torque. 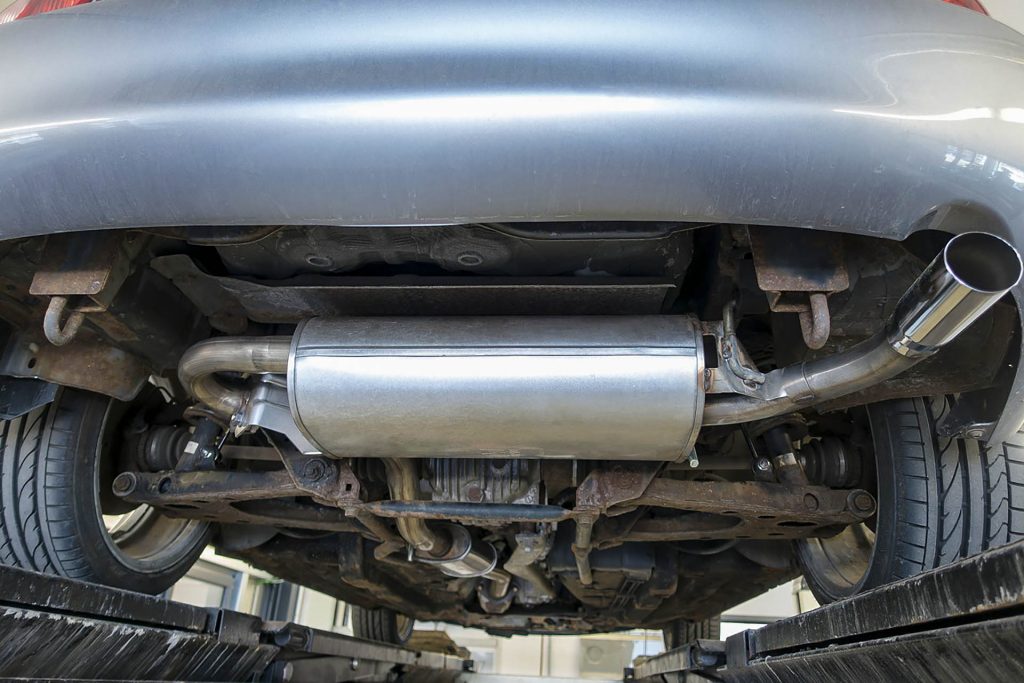 Mufflers use a variety of different engineering approaches to reducing and changing the sound of the exhaust. Solid or perforated baffles inside the muffler body can be used to suppress specific frequencies by reflecting sound waves back on themselves, and packing materials like fiberglass are sometimes employed to absorb sound energy, though if the muffler is poorly designed, they can get compressed or even blown out over time, compromising the effectiveness of the system. Mufflers with a “straight through” design typically give less flow restriction at the expense of less sound reduction than designs that force the exhaust to change direction or travel through multiple internal chambers. Even the overall size of the muffler plays a role in how it sounds – more internal volume gives the designer more opportunity to modify overall noise levels and tune out unwanted frequencies. 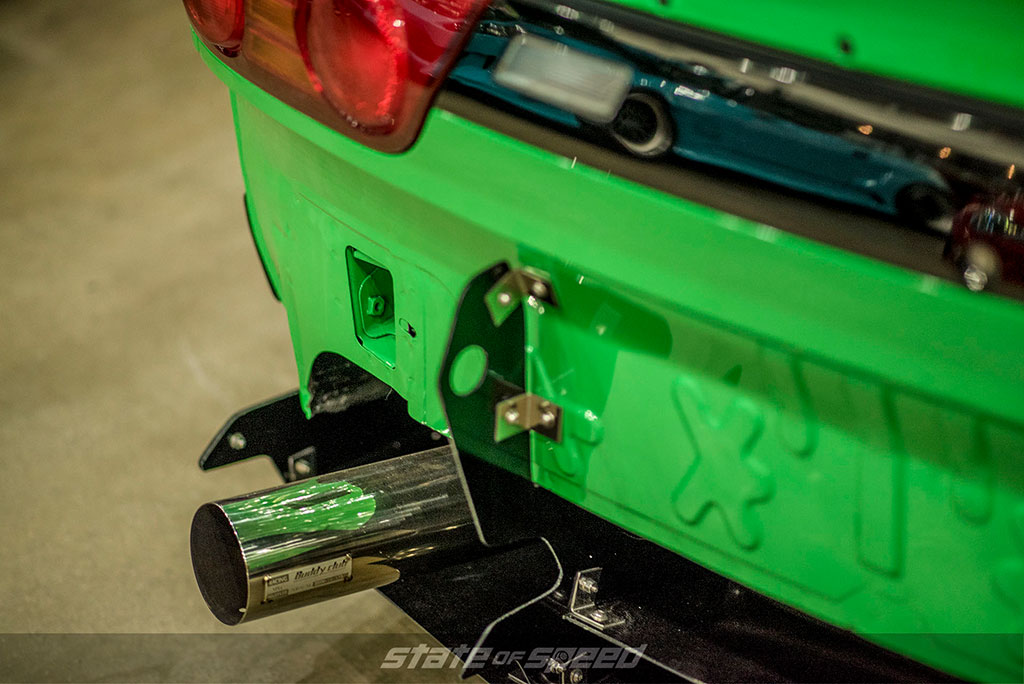 Of course, the main reason to replace the factory resonator and muffler system is to get an exhaust note that you like better than stock, and this comes down to personal taste. The only advice we can give you in this respect is, if it’s in any way possible, find somebody who already has the cat-back aftermarket exhaust you are considering and listen to it in person. Video and audio clips on the internet are better than nothing, but they are no substitute for hearing it yourself. It’s also important to ask yourself if it’s something you can live with all the time if it’s your daily driver, and if your need to flex on everybody who pulls up next to you at a stoplight is worth your neighbors actively hating your guts. A good exhaust system is music to your ears, but there are plenty of people out there who have hung new pipes on their car but secretly wish they’d picked something else, no matter how much they tell their friends it’s exactly what they wanted it to sound like.

The bottom line is that your exhaust system is one of the first things people will notice about your car, and one of the last things you want to get wrong. Make sure you educate yourself, get input from other people who have done the upgrades you’re considering, and be realistic about how much of a performance increase you can expect and how much additional noise you’re willing to live with to get it.