Say what you will about the patina craze we see at SEMA but the distinct weathered ‘n’ worn look just works on certain builds. The trend has come full circle as we’ve seen multiple examples of perfectly fine truck bodies get primered and scuffed up on purpose. 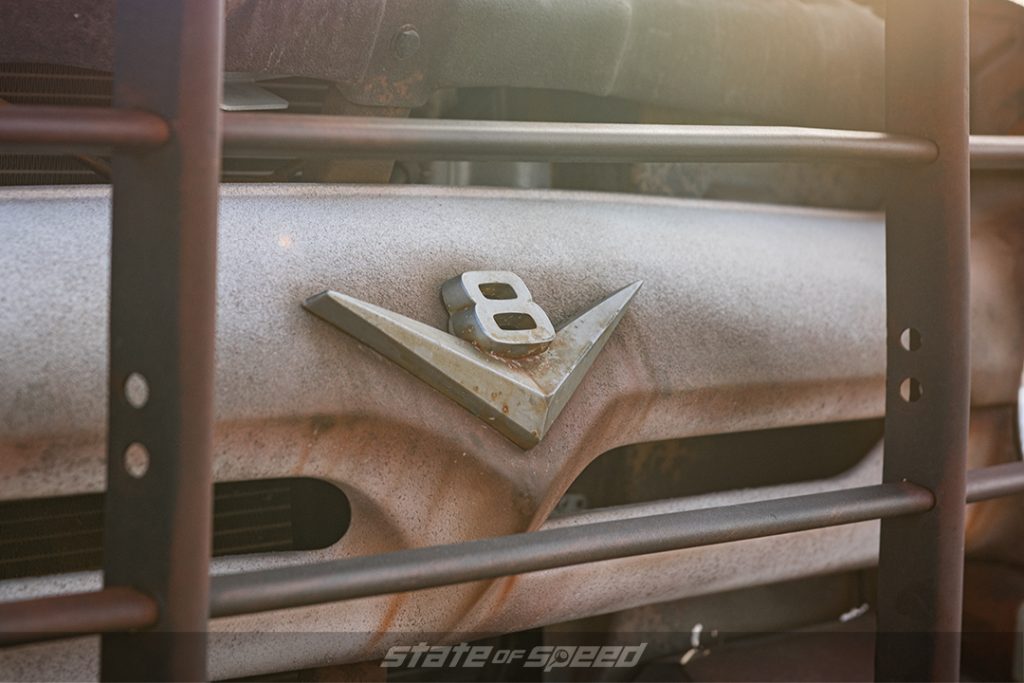 But the father and son duo at Hodson Motors in Las Vegas, NV handcrafts miracles out of the forgotten American iron from decades past. And just when you thought you have seen every iteration of Ford F-series pickup, this 1956 Ford F600 Crew Cab creation rolls in. 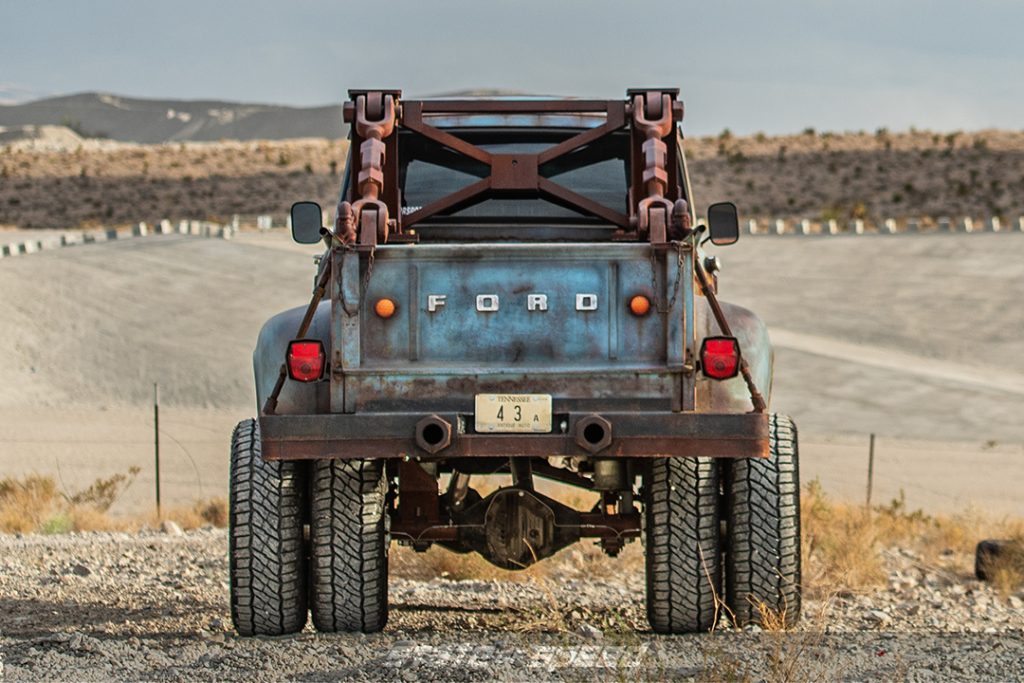 “We’ve had this truck for almost seven years,” son Riley Hodson jokes. “It’s always been the ugly duckling in the collection, always been a nightmare to drive. Now it’s excellent and fits in with our other trucks.”

…“the father and son duo at Hodson Motors in Las Vegas, NV handcrafts miracles out of the forgotten American iron from decades past,”... 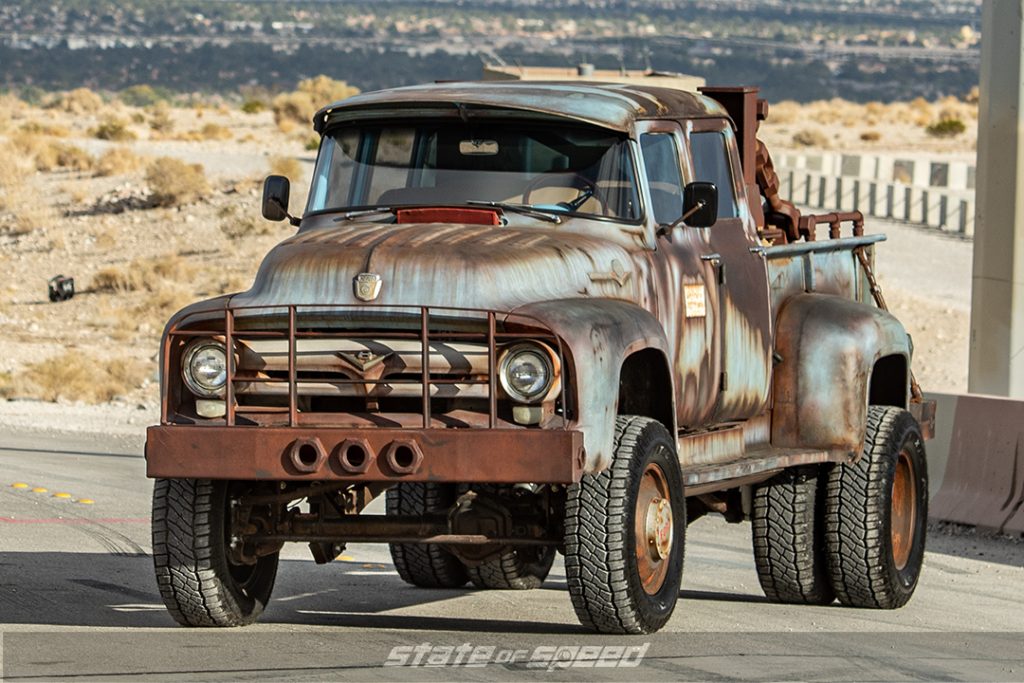 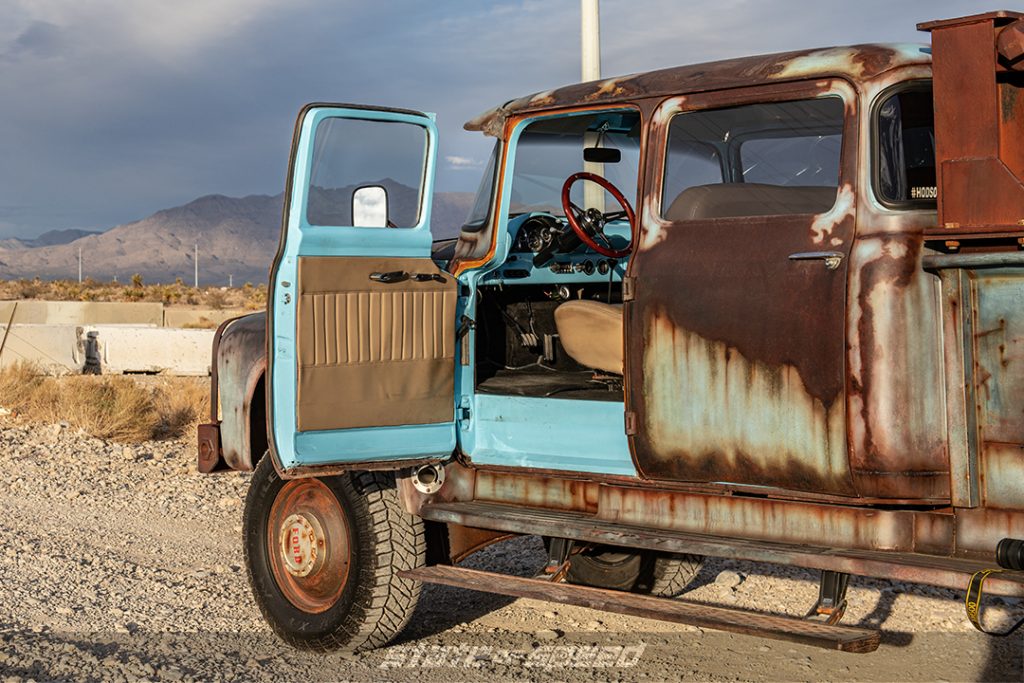 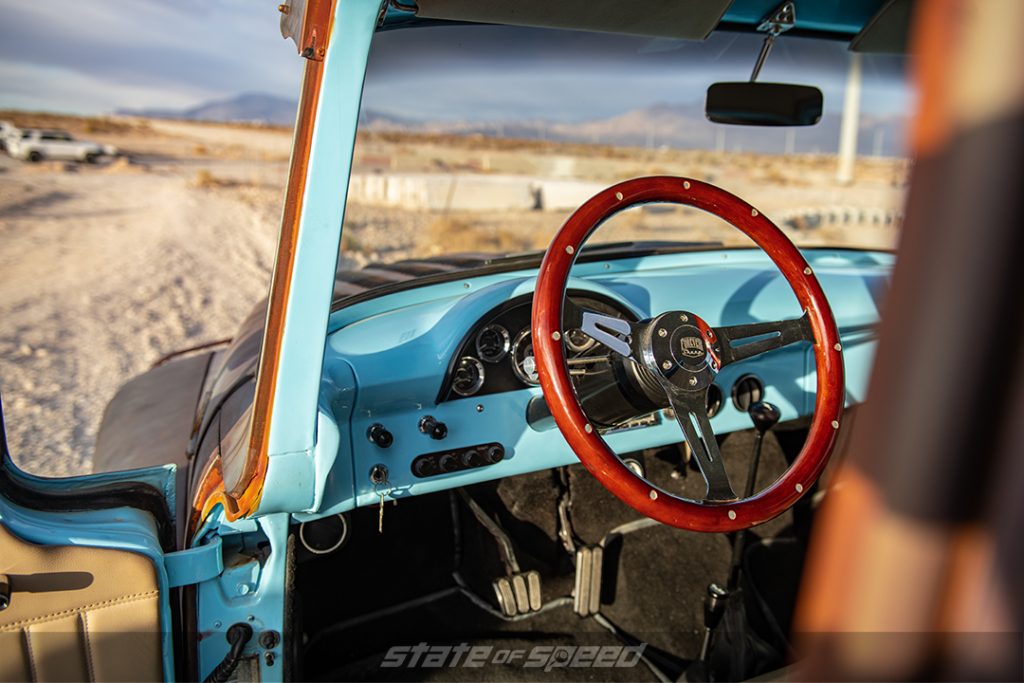 Claiming this old iron tub on wheels is now “excellent” in the driving department did not come easy. Under the skin, the antiquated Ford truck tech is gone, replaced with a complete conversion to a 2005 Ford F350 Super Duty 4×4 drivetrain mated to a 460ci Ford V8. There is now a modern-era Ford front-end geometry with a custom 4-link rear suspension all sitting on air suspension. Brakes are now Super Duty spec to stop the new set of massive rollers. 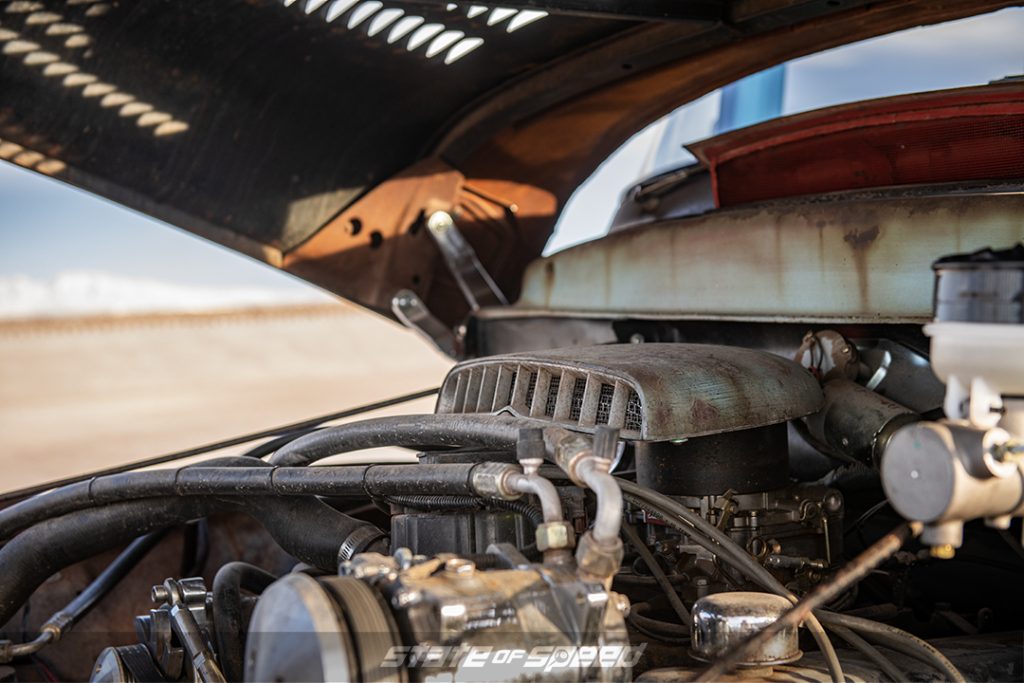 The Hodson team got to work on a fitting wheel and tire package. These rusty steelies are actually the modern design of the Fuel D500 but got a special aged appearance being patina’ed and cleared. The hub caps might not be from the 1950s but close enough and just work so well. The dually wheel package is wrapped in Milestar Patagonia X/T tires for a high dose of super duty and smooth ride blend. 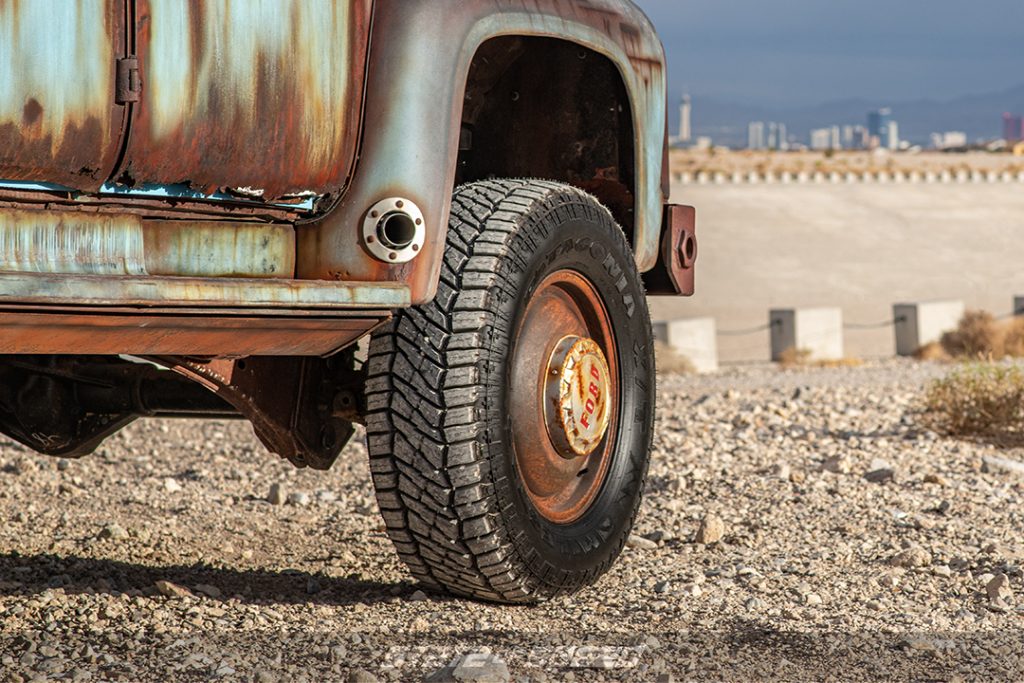 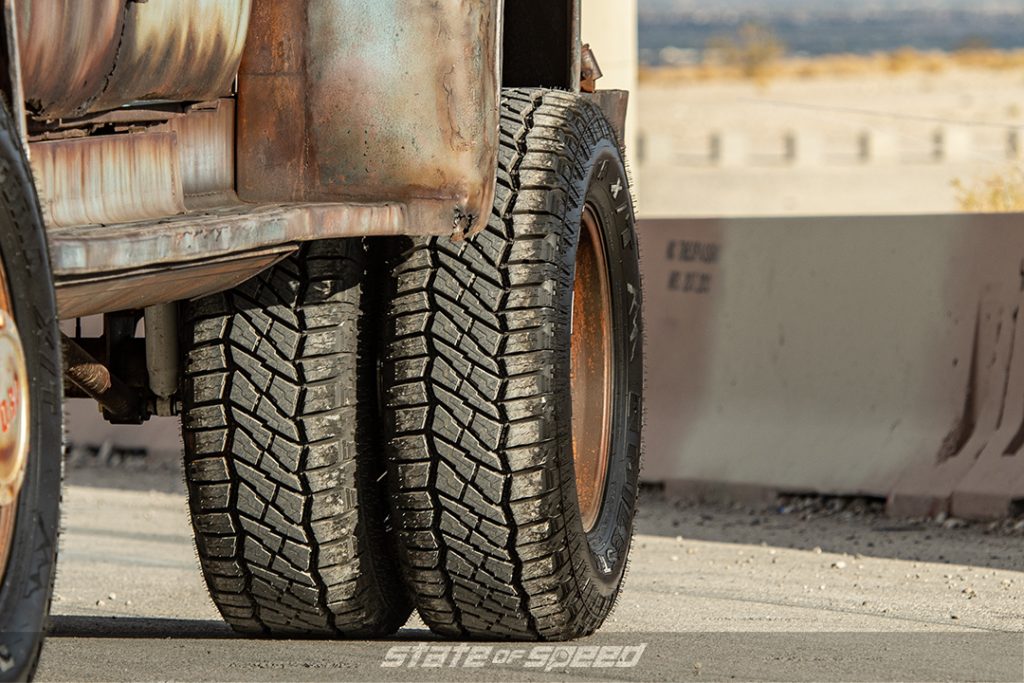 Hodson tends to shy away from the popular “it” truck of the month. Yes, the Bronco has the spotlight now and anything C10 or K5 from Chevrolet or GMC is an easy sell these days. But Hodson can take an overlooked American workhorse and use it as a base to make magic. They have done it before with their 1968 Dodge W300 Crew Cab, oddball Jeep trucks, and the generations of Chevys and Fords that slipped through the cracks. But this time around, the F600 appearance just offered a fresh approach to an almost never seen body style. 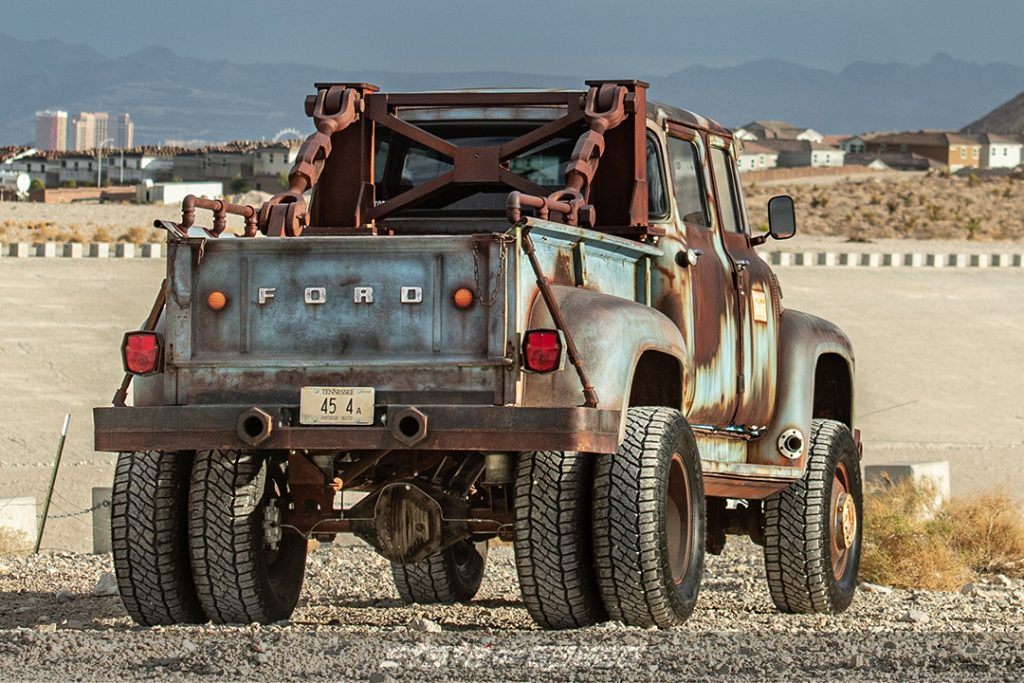 To accommodate the wider track and bigger rubber, the narrow-for-today fenders had to be widened. The team at 6651 Customs in Vegas went to work on the metal in the front and rear fenders making them chopped and stretched to make it all play nice. Then Ruethless Creations got to work on enhancing the patina and clear coat to make it all pop.

…“the father and son duo at Hodson Motors in Las Vegas, NV handcrafts miracles out of the forgotten American iron from decades past,”... 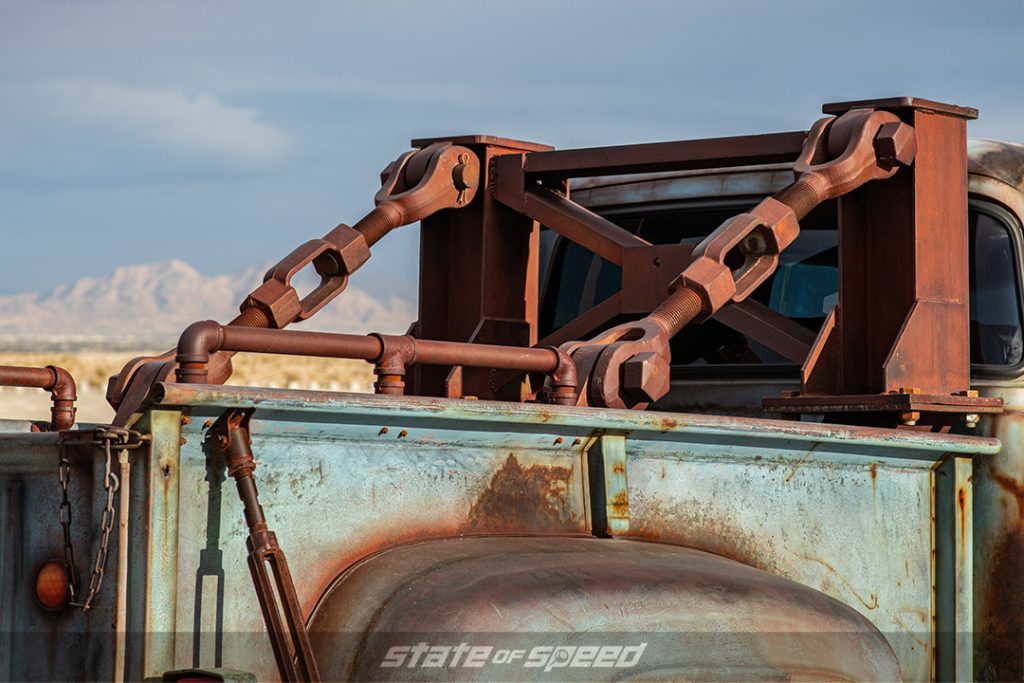 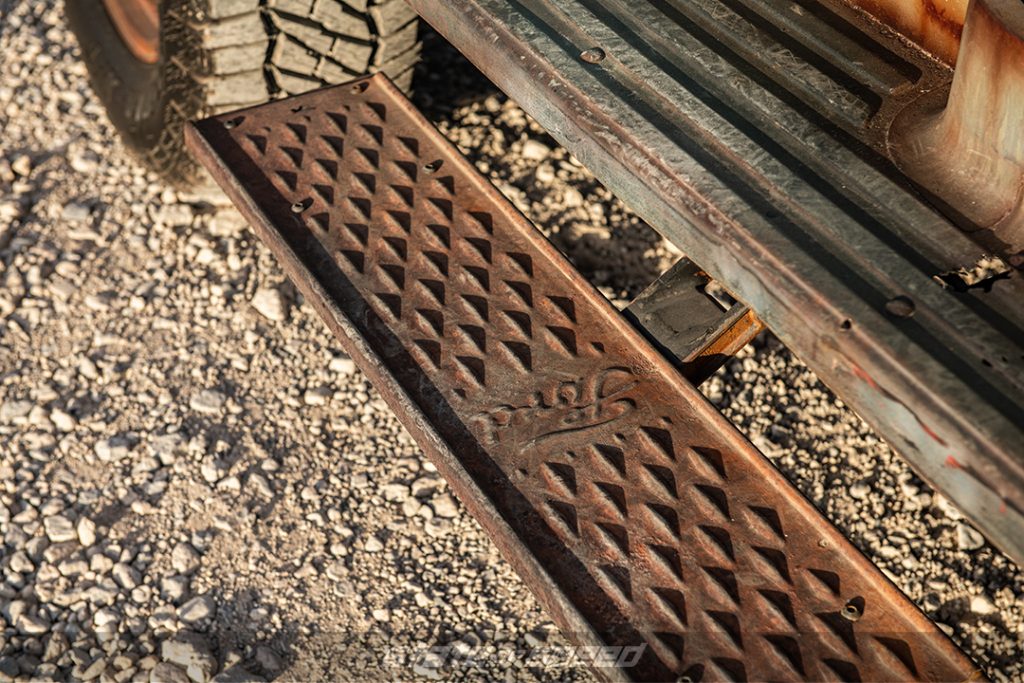 But the most outrageous features on this Hodson Motors Ford F600 is the monolithic rusted metal of the custom bumpers, bed rails, and that monstrous roll bar. Crafted from a train turn buckle, the roll bar certainly makes a statement and meshes with the sheer scale and attitude this truck brings. Long live the weathered trucks with modern guts movement.